One of the left’s favorite tactics to destroy rivals they cannot beat in a fair fight is to destroy their reputation.

Destroying a reputation is easy. Decide on one lie, and get enough people to believe it. See: Charlottesville Hoax

INSURRECTION: Left loves the drama and the invective, but doesn’t care about the event

The left’s endless invocation of the word ‘insurrection’ (a specific offence for which not a single person has yet been charged) to describe the events of January 6th are being leveraged to create a good guy / bad guy narrative.

The cop that shot an unarmed female veteran dead is a ‘good guy’. But flag-waving grandmothers whose lives are destroyed because they have walked through an open door in single file have had the book thrown at them, losing jobs and relationships in the process.

Sicknick wasn’t murdered, despite the press we hear. The photo of the guy with zip-ties wasn’t evidence that they were planning to take hostages. They were left behind by security in their haste to vacate, and he didn’t want them falling in the wrong hands.

Even the disruption to official proceedings angle is difficult to square with how these same Democrats tried to derail the Kavanaugh hearings, including intimidation tactics where a nutless Senator Flake was cornered in an elevator by a hostile crowd of ‘protesters’… or the invasion of Pelosi’s office by some of AOC’s closest eco-activist troublemakers … or the recent ‘storming’ of a Federal Building by tree-huggers demanding the end of fossil fuels.

In a scene reminiscent of Jan. 6, extreme environmentalist protesters push police to try to force their way inside the U.S. Department of the Interior in Washington, D.C. They’re demanding the end of fossil fuels. Officers use a taser to force them back. pic.twitter.com/3Mll8ajJZT

All of this ‘concern’ for ‘defending democracy’ is nothing more than political misdirection and poisoning the well.

Unlike so many others arrested for ‘parading’, or some other glorified version of a trespassing charge, this guy was calling for violence, and has previously aligned himself with a foreign military power, taking sides in Syria.

Daniel Baker, the U.S. Army veteran turned overseas militia member who posted a violent “call to arms” online ahead of feared right-wing protests at the Florida Capitol, was sentenced Tuesday.

…Baker was convicted in May on charges that he used the internet to transmit “true threats” to kidnap or injure.
On Jan. 15, the FBI descended on Baker’s High Road apartment, arresting him after he posted online calls to rise up “with every caliber available” to confront “armed racist mobs” in Florida’s capital.

Jason Coody, acting U.S. attorney for the Northern District of Florida, said the sentence “should serve as a significant deterrent to those who would solicit others to join them in conducting criminal acts rather than engage in lawful debate.”

“The free exercise of speech is central to our democracy,” Coody said. “However, the defendant’s threats of armed violence to inhibit expression of political views different than his own are both unlawful and dangerous.” — TallahasseeDemocrat

The PostMillenial gives some additional detail on who this criminal is. First, within context of the trial itself…

During the trial, the FBI used Baker’s posts on Facebook, Instagram and YouTube to show how he “escalated, indicating a potential for immediate threat during upcoming protests in Tallahassee.” 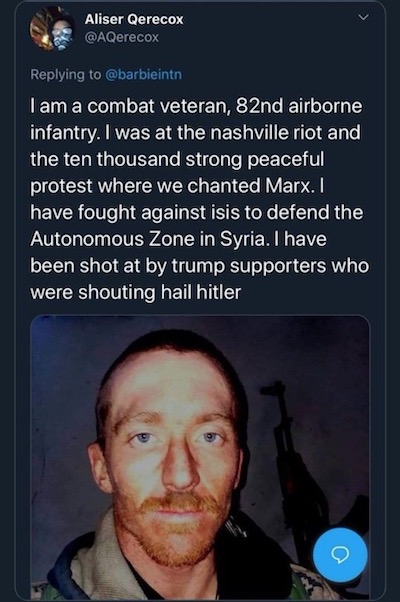 They followed that up with some potential connections to the CHAZ/CHOP uprising in Seattle.

However, Baker may have been involved in even more deadly events.
The Post Millennial revealed in February that Baker was suspected by private security hired by residents and businesses in the zone as well as zone activists of being one of the shooters during the incident. Information on Baker was turned over to the Seattle Police and the FBI at the time and recommended that they investigate his involvement.

Before the November Presidential election Baker said on social media, “God I hope the right tries a coup Nov 3rd cuz I’m so f—— down to slay enemies again.”

He was excited about the idea of a chance to murder Republicans. But Trump supporters are the ‘threat to Democracy’?

When you realize that a veteran who OPPOSED Marxism was recently fired for expressing his views on his own time, maybe this story suggests that Milley is looking for domestic threats in exactly the wrong place.

Unless of course, he’s sympathetic to that cause?