The prosecution has been awful throughout the trial, but this is a really big deal.

This is seems to be very good news for the defense, but we’ll have to see what happens in court.

The case that the prosecution has made against Kyle Rittenhouse has been failing. Their own witnesses made the case for the defendant, including the one who admits to pointing a handgun at Rittenhouse before the teen shot him in the arm.

WATCH: Witness Admits He Advanced And Pointed His Gun At Rittenhouse And THEN Kyle Shot Him

The evidence appears to show that Rittenhouse acted in self-defense.

The judge has blasted the prosecution for commenting on Rittenhouse remaining silent about August 25, 2020 until he took the stand which is the defendant’s Constitutional right under the Fifth Amendment. At the time, Assistant District Attorney Thomas Binger said that Rittenhouse’s silence enabled him to “tailor” his testimony to fit what other witnesses had said.

The prosecution’s case has morphed throughout the trial as it fell apart, but at the eleventh hour, they seized on FBI drone footage of that evening and used that as the linchpin in their closing by arguing that Rittenhouse provoked the attack by pointing his gun at protesters.

Here’s a screenshot from Wednesday’s Rekieta Law live stream that shows the difference in clarity: 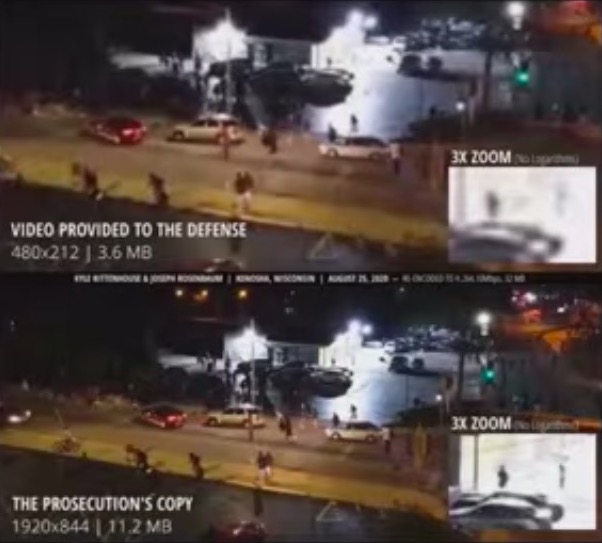 The defense filed a motion for a mistrial with prejudice arguing that the behavior of the state was so egregious against Rittenhouse that charges couldn’t be brought back against him.

Prosecutors in the Kenosha shooter trial withheld evidence from the defense that was ‘at the center of their case,’ only sharing the high-definition drone video footage on which they have hung their prosecution after the trial had concluded, DailyMail.com can reveal.

Assistant District Attorney Thomas Binger played the enhanced drone footage to the jury during his closing statements and claimed that it showed Rittenhouse ‘pointing his gun’ at people – an assertion that opened the door to the state claiming Rittenhouse provoked the violence of the night of August 25, 2020.

Now, in the motion obtained by DailyMail.com, Rittenhouse’s defense insist that the state only shared it with the defense after evidence had closed on Saturday November 13.

This is one just one of the grounds on which they have made a motion for a mistrial with prejudice filed by Kyle Rittenhouse‘s defense Monday afternoon.
Source: Daily Mail

The state didn’t provide the larger file to the defense until two days before closing arguments and after evidence was closed.

The filing states, “During the jury instructions conference, the defense played their version of the video for the court to review. The state indicated their version was much clearer and had their tech person come into court to have the court review their clearer video. The video is the same, the resolution of that video, however, was not.”

You can hear them admit it if you listen carefully here.

WATCH: Binger and Lunchbox ADMITTED in court they had a different version of the drone video

They are as stupid as they are corrupt pic.twitter.com/Ipg1QXcLNj

According to some of the lawyers “lawsplaining” the trial on the Rekieta Law livestream, this kind of thing meets the requirements of prosecutorial misconduct because it’s a Brady violation.

Some of the grounds for the mistrial are as follows:

Screenshots of the filing for a mistrial with prejudice is included below. 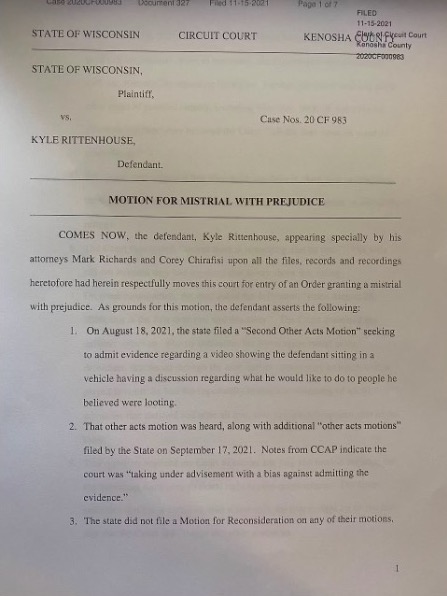 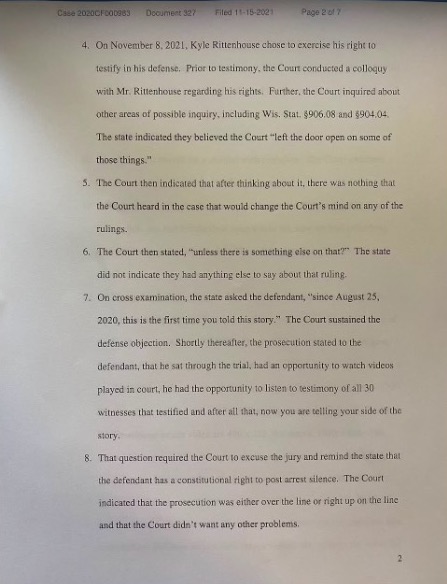 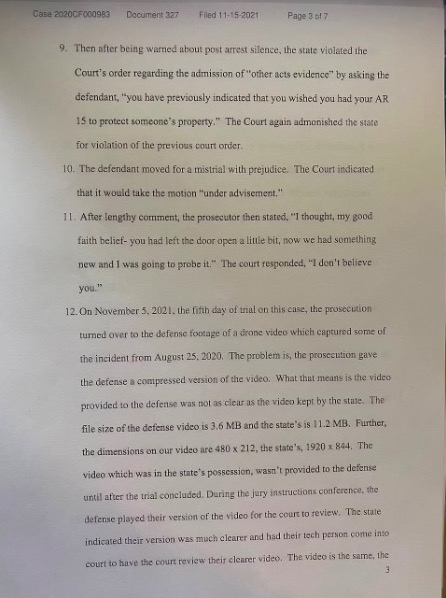 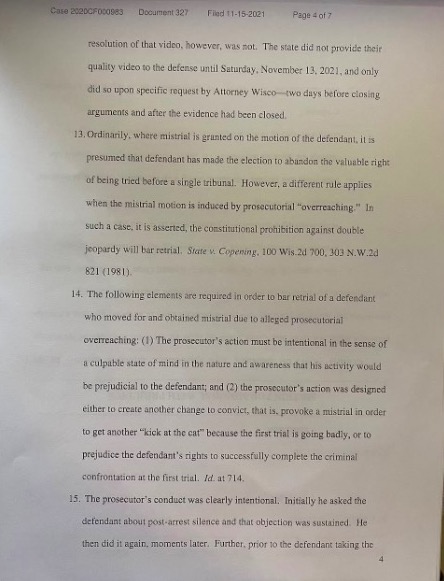 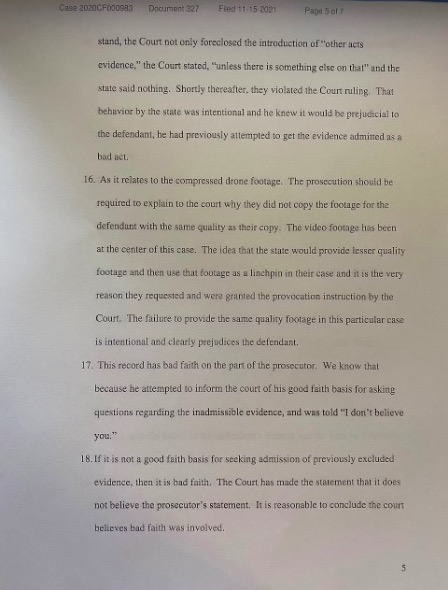 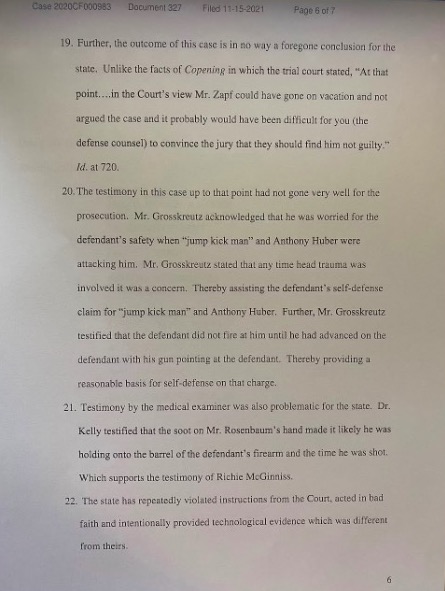 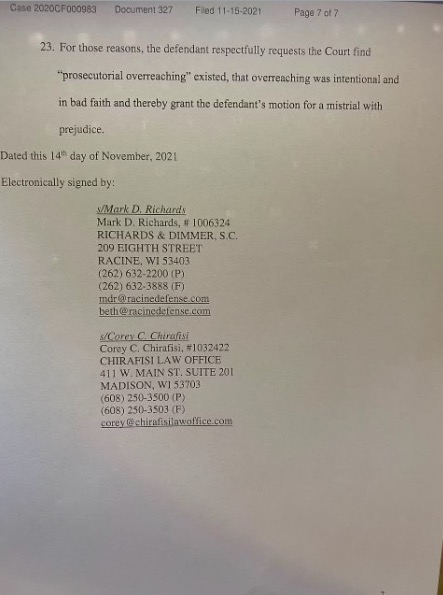 The motion reasserts the contention made by defense attorney Corey Chirafisi in court that ADA Binger’s behavior was “clearly intentional” and “prejudicial.”

In court on Wednesday, Rittenhouse’s attorney Mark Richards said that the video that the defense initially received was not the same length as the one that was given to the prosecution by the FBI.

Prosecutors then examined the video and had a police expert “zoom in” on a portion of the video to a blurry image that they hinged their case on.

Richards also noted that the software that was used to “enhance” the video to show one area says that “image enhancement with AI shouldn’t be acceptable in general for evidentiary use.”

I’m going to do the #KyleRittenhouse defense’s job again and hand them their appear should it be necessary. Remember the judges “house of cards” comment?

The Amped FIVE video software used, itself, says not to use it for evidence, only investigation.https://t.co/TgsXNOLWVY https://t.co/PRLzpa43k3 pic.twitter.com/05QJFAVu6n

In a late-night livestream, Nick Rekieta, a Minnesota lawyer who hosts the highly entertaining Rekieta Law channel on YouTube covered the filing by the defense along with some eyebrow-raising reports of ADA Thomas Clair Binger’s personal relationship with a Kenosha judge, and his rather interesting former email handle at the 15:25 mark. (Yes, that’s his real middle name.)

It’s three hours long, but he gets to the motion to dismiss at the 30-minute mark and explains it in detail.

Now, we have to wait and see what the Court does with this.