It was supposed to be a community celebration, kicking off the holidays as they draw near. It ended with horror and bloodshed.

Waukesha was one of some ten thousand American communities whose name most of us were never supposed to know unless someone from there becomes an A-list celebrity. Until yesterday, nobody could have imagined they would be famous for an act of malice like this.

The quiet of a holiday parade was pierced by cries of panic when the driver of a red SUV burst into the parade as he went on a killing spree. 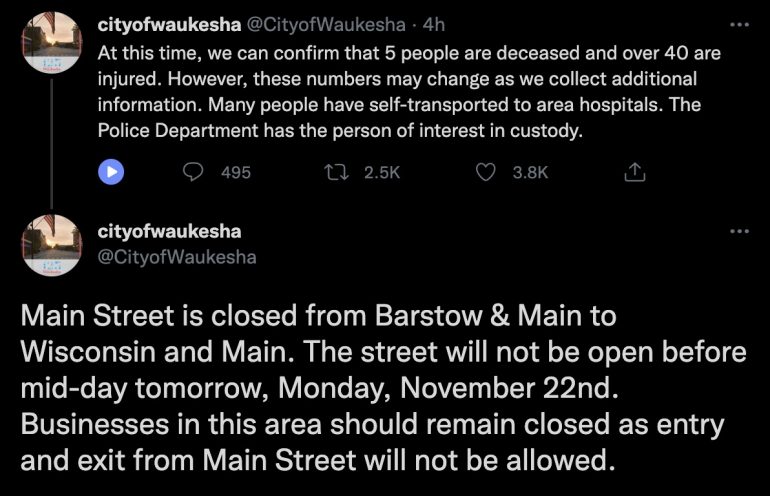 As the SUV broke through barricades, a Waukesha police officer fired his gun in an attempt to stop the vehicle, Thompson said. No bystanders were injured and Thompson said he did not know if the driver was struck by the officer’s bullets.

…“They were pompoms and shoes and spilled hot chocolate everywhere. I had to go from one crumpled body to the other to find my daughter,” he said. “My wife and two daughters were almost hit. Please pray for everybody. Please pray.”

One entry in the parade, the Milwaukee Dancing Grannies, posted on its Facebook page that “members of the group and volunteers were impacted and we are waiting for word on their conditions.” The group’s profile describes them as a “group of grannies that meet once a week to practice routines for summer and winter parades.”

Chris Germain, co-owner of the Aspire Dance Center studio, had about 70 girls in the parade ranging from as young as 2 being pulled in wagons to age 18. Germain, whose own 3-year-old daughter was in the parade, said he was driving at the head of their entry when he saw a maroon SUV that “just blazed right past us.” A police officer came by on foot chasing after, he said. Germain said he jumped out of his own SUV and gathered the girls who were with him.

“There were small children laying all over the road, there were police officers and EMTs doing CPR on multiple members of the parade,” he said. –Chicago Tribune

And one reporter got very uncomfortable when an eyewitness gave a description of the driver he obviously did NOT want to hear.

In the closing moments of that 1-minute news clip are some images of the attack itself.

It’s too soon to say whether this attack has something or nothing to do with the acquittal of Kyle Rittenhouse just days earlier in the same state, or if there is anything beyond a superficial similarity to past vehicular Christmas-related terror attacks we’ve seen in Europe.

But whatever the real motive, some race agitators seem happy to count it as a win. Did this guy just say ‘the revolution has started’ with this Christmas Parade attack?

Man implies the Waukesha BLM terrorist attack was in response to the Kyle Rittenhouse acquittal. pic.twitter.com/xzepLXpQTS

Because the media — including the NYTimes who was exposed for making a conscious editorial decision to run every story through a filter of racism — will have to think long and hard about where call ‘wolf’ for racism where it doesn’t exist leads a group of people who are being simultaneously told they are being ‘disenfranchised’ and that the system is rigged against them.

One hopes there are enough resources and personnel in FBI not otherwise occupied with infiltrating Bible Studies, orchestrating felonies against elected Governors, or investating the ‘terror links’ of PTA moms that they can adequately investigate this mass murder domestic terror attack.