Researchers are concerned that the study — which is ongoing — shows a disturbing increase in miscarriage before 20 weeks gestation.

Two New Zealand researchers say that countries should halt administering mRNA SARS-CoV-2 vaccines to women who are pregnant and breastfeeding after thoroughly examining a study by the Center for Disease Control and Prevention that was published by the New England Journal of Medicine in April.

The study has been used in the United States and around the world to show that vaccines are safe for pregnant and breastfeeding women.

Two New Zealand researchers have raised some concerns about the study because it left out a significant detail that would be very important to pregnant women… the risk of miscarriage.

The study, though, was corrected last month after concerns were raised by a researcher in Belgium. The CDC scientists acknowledged they should have made clear that they could not accurately calculate a risk estimate for miscarriages because follow-up data was not yet available for most of the women.

The correction resolved some of the issues, but there are still more, according to Dr. Simon Thornley, a senior lecturer in the University of Auckland’s Section of Epidemiology and Biostatistics, and Dr. Aleisha Brock, another researcher in New Zealand.

“The article’s conclusions haven’t changed substantially as we believe is warranted from our re-analysis of the association related to early exposure to the vaccine in pregnancy, which indicates a substantially increased risk from background,” Thornley told The Epoch Times in an email.

Thornley and Brock re-analyzed the data and calculated the incidence of miscarriages in the first trimester was actually 82 percent to 91 percent in a paper (pdf) published in Science, Public Health Policy, and the Law.
Source: Epoch Times

To put that number in context, in the United States, the miscarriage rate is reported to be as low as 10% to as high as 26% in the first trimester in general so a jump to 8 in 10 is significant.

In September, the conservative women’s magazine, Evie, had covered this before anyone else. Evie’s headline was “Study Shows That Up To 8 In 10 Women Had A Miscarriage After Getting The Covid Vaccine Before The Third Trimester”.

From the CDC study:

From the Evie article by Jane Swift:

Okay, what do these statistics mean? Firstly, 827 women completed their pregnancy during the study, and 712 of them successfully gave birth. 700 of those 712 women who gave birth received their Covid vaccine in the third trimester.

Secondly, 104 of those 827 women experienced “spontaneous abortions,” i.e. miscarriages, with 96 happening in the first trimester. Now, initially, that looks like 1 in 8 women, which is 12.5% – which fits within the general miscarriage rate in the U.S. This calculation is similar to how the national average is calculated – just “how many pregnancies end in miscarriage” – without any special qualifications.

However, this study is focusing specifically on how the Covid vaccine impacts pregnancy, including by trimester. So to more precisely calculate the miscarriage rate, we have to remember that miscarriages, by definition, occur before the 20-week gestation mark. This means that all 700 women who received the vaccine in the third trimester must be excluded from the calculation because they were already past being able to have a technical miscarriage. So really, 104 out of 127 women experienced a miscarriage. This means the miscarriage rate of women who received the vaccine in the first or second trimester is actually 81.9%, or 8 out of 10 women – way, way above the national average.

Another thing to note is that this study is still ongoing, as 3,131 participants had not completed their pregnancy yet at time of publication, so these preliminary statistics will change. Right now, we’re seeing two ends of the spectrum because of the short follow up window. Follow up occurred only two to three months later, which means the researchers had a higher probability of getting results at both ends of the spectrum – women who gave birth and women who miscarried early in their pregnancy. Once more follow ups are done over time, these numbers will change.
Source: Evie Magazine

That report by Evie was in September. No additional corrections to the CDC article have been made since the one in October noting that the risk of miscarriage wasn’t available because the study was ongoing.

What’s interesting is that Twitter has labeled the link to the Evie report a potentially “unsafe” link. 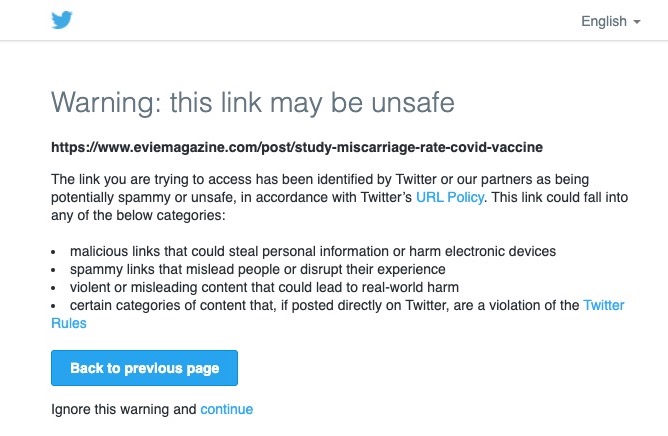 Of course, Reuters has fact-checked the Evie article’s claim and said that it’s “misleading.”

But the study is still ongoing and well, take the “fact-check” with a grain of salt.

These are the same people that “fact-checked” a meme about Vice President Kamala Harris poorly, and even”fact-checked” the Babylon Bee, a satire site.

If that’s not embarrassing enough, Reuters also “fact-checked” whether President Biden was using a “white power” gesture during a CNN town hall in October.

U.S. President Joe Biden's hand gesture at a CNN town hall in Baltimore did not indicate white power, contrary to claims on social media. He made the hand gesture while saying corporations pay “zero cents”, in response to a question about tax rates https://t.co/IBNSPVhjmJ pic.twitter.com/86283pZlVh

Y’all over at Reuters know that’s a 4chan hoax for the gullible media, don’t you?

And they wonder why trust in the Corporate Media is waning… maybe look in a mirror, Reuters.