There are certain things that should never ever be hijacked for political purposes. Honoring our soldiers is one of them.

A war memorial in Canada was vandalized on Thursday just hours before a ceremony to honor both veterans and fallen soldiers. In Canada, November 11 is Remembrance Day, a day set aside to honor fallen soldiers and veterans.

The “Wall of Honour” at the cenotaph in Cranbrook, British Columbia was defaced with green graffiti that read, “The real heroes are the vaccinated!”

Cranbrook RCMP is investigating an act of vandalism committed against the Kootenay city’s cenotaph on Remembrance Day.

Mounties say they were called to the site around 7 a.m., when a passerby noticed graffiti scrawled across a memorial at the site.

The words, written in green paint, say, “the real heroes are the vaccinated.”

City workers, firefighters and police scrambled to clean the graffiti and were able to get the message removed before the city’s Remembrance Day parade and ceremony took place at 10:15 a.m. 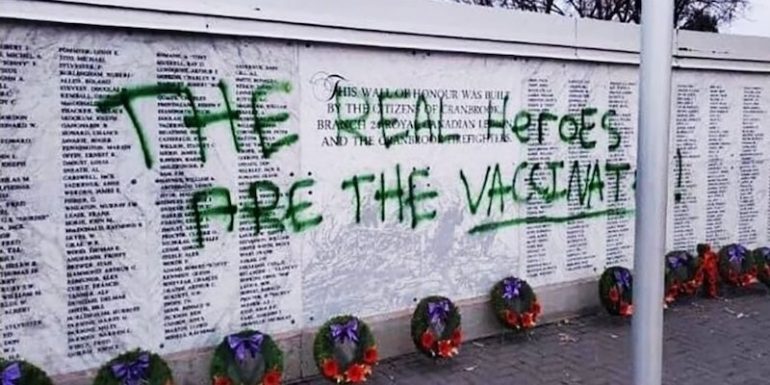 But that’s not the only thing that happened on Thursday in Cranbrook.

There was also a protest against ongoing pandemic restrictions in Canada… at the same cenotaph.

Those are the facts. The following is an analysis of those facts.

There are two options here:

1. It’s a “false flag”.
2. The vandalism was put there by people terrified by the pandemic.

Could it be a “false flag” to vilify the pro-vaccine crowd? It could.

Off the bat, I get what the protesters were trying to do by showing that the freedoms for which these brave soldiers put their lives on the line have been trampled by every level of government over the past two years. Canada has been almost as bad as Australia in violating the rights of individual Canadians over the past year, and it’s been disgusting.

I sympathize with the protesters’ argument, but… time and place matters. A Remembrance Day ceremony at the cenotaph is neither the time nor the place.

It seems just a bit too convenient that the same place that had massive pro-vaccine vandalism also had an organized event to blast the government’s restrictions. It could certainly be a coincidence, but it’s a bit… suspicious.

It’s also apparent that the organizers of the protest don’t exactly have the best judgment if they think that airing their concerns immediately after a solemn ceremony is a good idea.

But that’s not the only option…

The vast majority of Canadians appear to be absolutely terrified by the virus. That’s clear because they have largely approved of pretty much all of the pandemic restrictions and have cheered on the government limiting travel to those who have been vaccinated.

For the past few years under Prime Minister Justin Trudeau, there has been a denigration of Canada’s history as a racist, colonizer, that has committed “genocide” against its indigenous peoples.

This has worked well for the Liberal Party of Canada and has brought Trudeau back-to-back election victories in two years.

This vilification includes ignoring vandalism and wanton destruction of churches because of the discovery of bodies of indigenous children in abandoned, unmarked gravesites that had been reported were there in Canada’s 2015 Truth & Reconciliation Report in a section on the very controversial practice of sending indigenous children to Residential Schools.

Media, Politicians Don’t Care Much That 50+ Churches In Canada Have Been Vandalized Or Set On Fire Since May

As a result of the graves that were found, Canada had its flag flying at half-mast for nearly 6 months. Prime Minister Trudeau said that it raising the flag was up to Canada’s indigenous people. The Prime Minister changed course when polls showed that most Canadians said that the flag should be raised in order to lower it on November 11.

What the heck does that have to do with pro-vaccine graffiti? Everything.

The flag, churches, statues, famous Canadians from history, an anti-lockdown, libertarian politician — anything that represents Canada as a nation or freedom itself — have all been vilified as the “woke” authoritarians try to stamp out any and all opposition.

These same zealots have been whipped up by Trudeau who said that the vaccinated have the right to be protected from those filthy, unvaccinated heathen.

At the time of this writing, more than 90% of eligible residents of British Columbia age 12 and up have had at least one dose of the vaccine while more than 82% have had two doses.

It’s unsurprising that the majority is trying to bully that small segment that has chosen to remain unvaccinated.

What’s clear is that it doesn’t matter who it was that put that graffiti on the cenotaph — they’re just some idiot loser that is going to do damage to their cause whatever it is.