This election was supposed to be a cakewalk for McAuliffe. The fact that anyone is talking about the possibility of an upset is evidence that their team badly misplayed this election.

He’s already won this race before. He has name recognition. He has all the connections. It’s become an increasingly blue state. It should have been a tap-in.

But it went off the rails pretty badly for McAuliffe. And he’s started throwing everything and the kitchen sink at Youngkin… even if that means playing dirty.

Just a few days ago, his team was caught trying to generate a racism hoax. Some of McAuliffe’s people cosplayed as ‘tiki-torch carrying nazis’ to ‘support’ Youngkin. That blew up in their faces when all 5 of the play-actors were ID’d and connected to Terry’s campaign in a matter of minutes. It got weirder when the Lincoln Project took credit for the idea.

Needless to say everyone’s guard went up for any more of these lame attempts at a race hoax. And did you see what was conveniently spotted by a reporter? 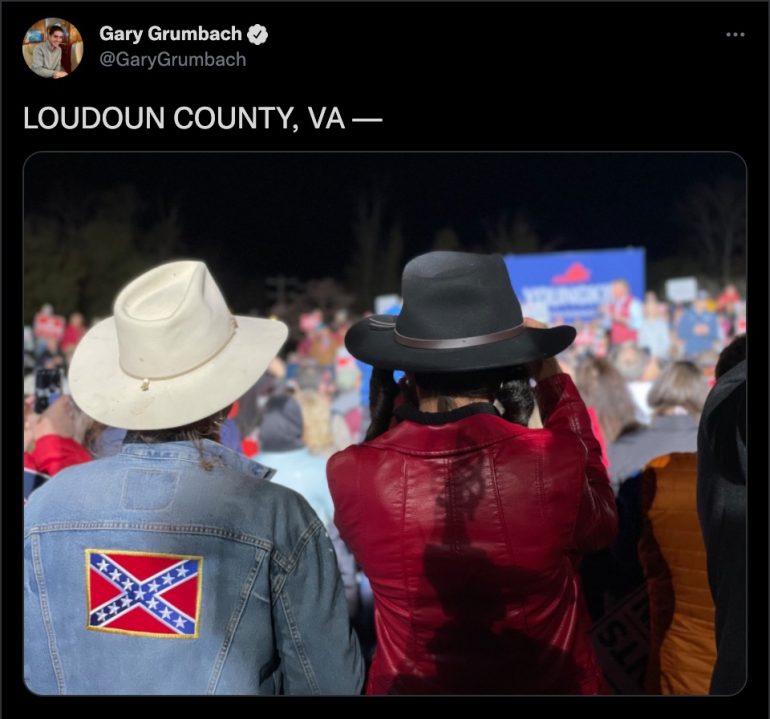 It wasn’t just ONE reporter, either. Then again, how could he possibly miss it?

I mean literally the dude presented his confederate flag patch to the press. Literally. pic.twitter.com/lbsJmAexwc

“I’m just going to mosey on over and plant myself right in front of the news media with my sparkly new confederate flag patch.” pic.twitter.com/WWIGnLhmOH

Amazing how the poorly sewn confederate flag jacket found itself directly in front of the media and in every reporter’s photo days after a Democrat group staged a white supremacist hoax at another campaign event https://t.co/fcRgRWG1Mf

Well, amazing is one word for it.

If they thought this was real and not a stunt these reporters would be tweeting his name, home address and social security number.

Amazing how that curiosity disappears when the context free photo furthers a narrative https://t.co/P1S4UY5r8f

Democrat Reporters knew what narrative they were looking for… and isn’t it convenient how exactly that narrative dropped into their lap, with not one but several journos running it with exactly ZERO context or questions about the guy wearing the jacket.

3 different angles from 3 different journalists, all conveniently standing behind a man with a newly-sewn confederate flag patch

How do you do, fellow confederates? Just me, racist confederate with an extremely new-looking confederate flag patch in a very normal place on my jacket at a Glenn Youngkin rally, who is also a racist pro-confederate. https://t.co/Ip22bvrJt4

While his identity has not (yet) been tracked down, here’s a glimpse of his face.

What do you think… is this story just a little TOO convenient, or nah?