Shortly after the ‘guilty’ verdict against the men who shot his son, Ahmad Arbery’s father had something surprisingly optimistic to share with the press.

As a dad, it’s almost impossible to imagine the emotions that must be raging within the heart and mind of Marcus Arbery.

His son had been shot dead. The trial generated national notoriety.

And in the one time that most parents would have been suffering almost inconsolable grief, trying desperately to cling to the good memories they had shared with the child who was now gone, he had to hear his son’s name and character dragged through the mud in a court of law.

Even if the jury had found in favor of the defendants, this incident left real victims in its wake.

But the jury found the men who had shot his son guilty. They were convicted. The law, it seems, worked the way it is supposed to… weighing the facts presented in court, and coming to the best decision they can about guilt or innocence.

He took the result of the decision as an opportunity to say something positive, rather than to condemn the country as worthless.

And in the process, he even got race grifter Al Sharpton to repeat a certain ‘unspeakable’ truth. See if you can spot it.

Father of Ahmaud Arbery just now: “ALL lives matter. I don’t want no daddy to watch his kid get shot down like that. It’s ALL our problem. So let’s keep fighting to make this a better place for all human beings. Love everybody! All human beings need to be treated equally.” ❤️??? pic.twitter.com/PlGwBeMlhU

Did you catch it? Sharpton just echoed ‘all life’ when Marcus Arbery said that ‘all life matters’. 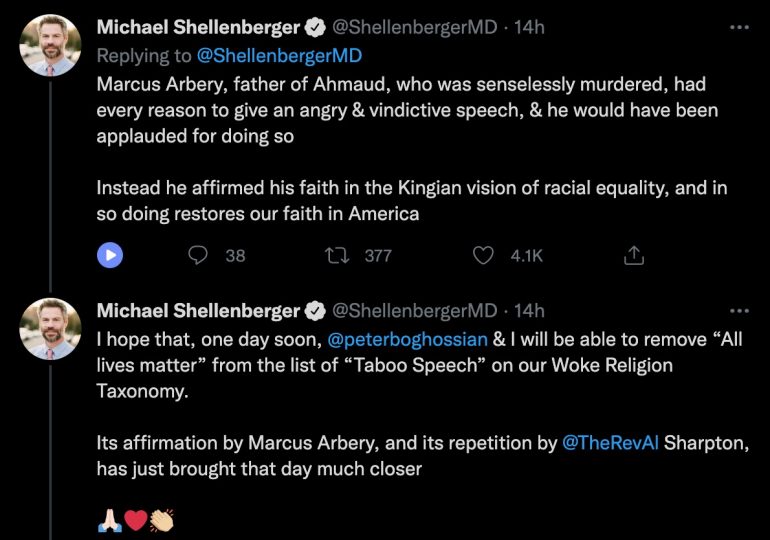 For a couple of years now, BLM has gone to war with anyone who dared to say that phrase, demonizing them as bigots, because that statement kicks the knees out from under what they’ve been trying to do. They aren’t looking for the kind of colorblind society that MLK once had a dream about… they want to elevate and enshrine race into every aspect of society and use it to further divide us.

But in a moment of clarity, a grieving father pointed us back to the vision of MLK, of what he fought and died for. This writer can’t speak to his wider motives, or other positions on issues of race, I’ve never met the man, nor spoken to him. I don’t presume to read his mind.

But what I do know, is that whatever he has said in the past, or might yet say in the future, this clip points us back to a time when America made a national holiday to honor the work and dream of a great man. To a time when so much of the country was working together to implement and live out the Framers’ idea of ‘out of many, one’… not just unity of states, but unity of people, too.

How can Marcus be happy on a day like today? By looking to the original meaning of the word ‘justice’. The one embraced by both our Constitution and the Bible. You’d think a rev-uh-rund like Sharpton would know that.

In the last few years, activists on the left have been quietly gutting our language and replacing old words with new meanings. Justice is one of those words they are trying very hard to hijack and repurpose.

But here we see Mr. Arbery savoring obvious satisfaction afforded in the original sense of the word ‘justice’. It’s the ancient virtue celebrated across many cultures in which guilty people are punished, and innocent ones go free.

And with this verdict, Mr. Arbery got his.

And this justice, for all its many faults and imperfections… is part of what makes America great, no matter what the talking heads on TV might tell us.