The 19-year police veteran wants his job back now that Kyle Rittenhouse has been found not guilty of all charges.

Norfolk Police Lieutenant William “Bill” Kelly, 42, was fired after an April 16, 2020, article in the Guardian revealed that he was one of several law enforcement officers that made a donation to Kyle Rittenhouse’s legal defense fund on the crowdfunding site, GiveSendGo.

Kelly’s donation had been anonymous, but The Guardian used information that was hacked which they euphemistically call a “data breach” and was sent to news outlets by a leftist activist group called Distributed Denial of Secrets.

One donation for $25, made on 3 September last year, was made anonymously, but associated with the official email address for Sgt William Kelly, who currently serves as the executive officer of internal affairs in the Norfolk police department in Virginia.

That donation also carried a comment, reading: “God bless. Thank you for your courage. Keep your head up. You’ve done nothing wrong.”

The comment continued: “Every rank and file police officer supports you. Don’t be discouraged by actions of the political class of law enforcement leadership.”
Source: The Guardian

Kelly said that after the article was published in The Guardian, and another in The Daily Dot, the Norfolk Police Department was receiving calling for him to be fired.

“It wasn’t people local, it was people from all around the country who read an article and sent a nasty tweet. In the absence of that outcry, there would not have been any kind of disciplinary action against me, I’m confident,” said Kelly.

As a result of the publishing of the hacked material, Norfolk P.D. said that the public trust in the police had been “eroded” and Kelly was fired.

He said that he wished that the city officials had waited until the trial had concluded or at least tensions surrounding the case had calmed before firing him for kicking in a few bucks for the legal defense for a teen that Kelly believed was acting in self-defense.

Kelly has filed a grievance for wrongful termination, but the process is long.

In his complaint, he noted that his “woke” boss, Norfolk Police Chief Larry Boone, had participated in a BLM protest while on duty and in and uniform in May 2020, and faced no repercussions. 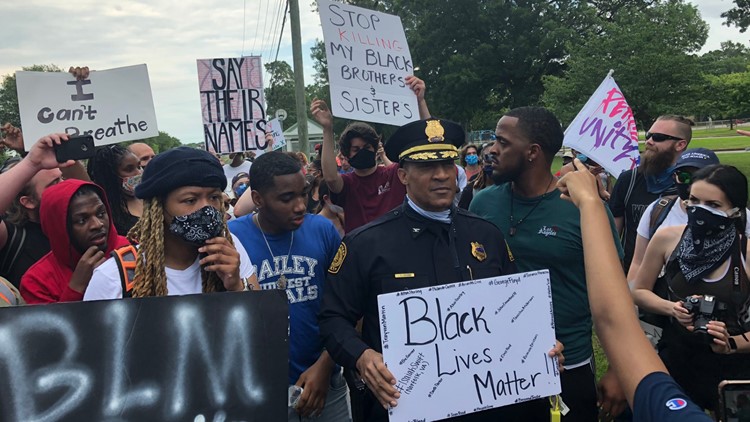 Kelly spoke to the Daily Mail after the Rittenhouse verdict was in.

“The hypocrisy is dumbfounding. For the leader of our organization to be able to advocate support for a movement that is at the very least divisive in America today, in uniform while on duty… [the sign] he was holding carried the name of a person who had recently been shot by a Norfolk police officer,” said Kelly. That shooting incident was still under investigation at the time.

“Yet I cannot, off-duty, on my own time make a donation and some comments that are well within the realm of public, acceptable discourse?” he asked.

Kelly says he made the decision to send a donation as a private citizen because he’s a self-described “news junkie” and had been following the details of the case including pouring over videos posted online and eyewitness accounts.

‘I was very surprised when he was charged soon after the shooting with these murders and the shooting of the third victim,’ he said…

…’I was interested in giving him the chance to defend himself in front of a jury. I know that lawyers are expensive, and it’s hard sometimes to get the message out there. I wanted to make sure that he had the means necessary to make his claim in court.

‘It mattered. The comments I made, my belief that he has a strong claim for self-defense was a personal opinion. I didn’t want my city or police department to be associated with it, so I chose to donate anonymously.

Kelly told the Daily Mail, “If I had a different opinion and I donated to a fund for the victims and made comments about how Mr. Rittenhouse was a murderer, nobody would have cared or tried to get me fired.”

He said that he found that the silencing of conservative views is “chilling” and makes law enforcement officers feel as though they must cave to the “woke” mob.

‘It made me feel disposable. Not only how it affected me, how it affected other officers. I was contacted by others who said they immediately deleted their social media accounts after I got fired out of fear that they would go through them and find something innocuous to use against them.

‘I’ve been contacted by officers who say, “what if Trump runs in 2024 and I put a sign for him in my front yard, can media get a hold of that? If enough people complain, will I lose my job?”

‘The effects of this kind of censorship are wide. It ripples through the entire department. It’s a chilling effect.’

The City of Norfolk didn’t respond to the Daily Mail query on whether Kelly will get his job back.

Kelly is also concerned that the polarization in the country is not going to change any time soon.

Kelly said that even though Rittenhouse has now been acquitted, he does not believe public discourse will change because people have ‘dug in’ to their opinions.

‘I don’t think the discourse will change. People are dug in on their heels… they’ll point to some other boogie-man as an excuse as to why he was acquitted. They won’t be forced to look at the facts of the case. I don’t think they’ll change their mind.

‘Honestly, most of America is pretty polarized. People on both sides who seem to be ideologically dug in to their position.
Source: Daily Mail

Much of this polarization is fueled by the Corporate Media and it isn’t going to change until their left-wing ideological bubble pops and becomes more nuanced allowing right-wing voices to be aired.

Until that happens, the “chilling effect” of the censorship of right-wing viewpoints will continue.