This is so heartwarming.

Avalinn Rackley, 7, was seriously injured when a tornado tore apart their Caruthersville, Missouri home on December 10. Her older sister, Annistyn, 9, was killed, and her mother suffered severe brain trauma and remains in hospital. Her father, Trent, and younger sister, Alana, 3, suffered minor injuries.

The family had moved in just a week before the tornado hit.

A photo of the three girls hiding in the bathroom during the tornado went viral. 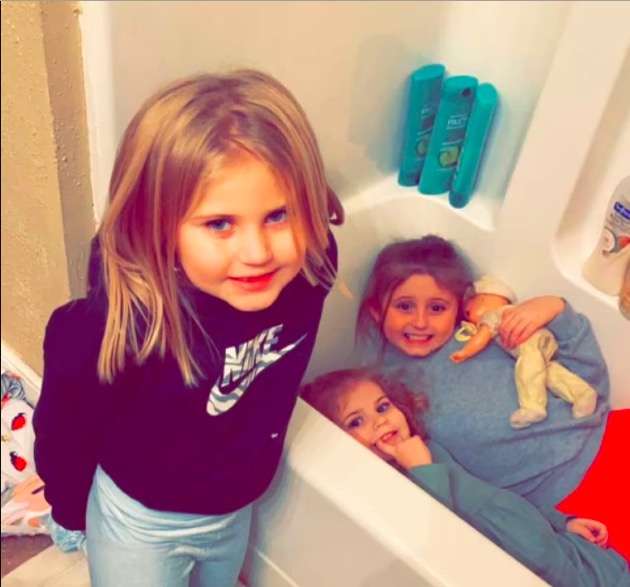 A video of Avalinn wearing a back brace and relearning how to walk was posted on social media.

Another follow-up video shows that despite all of the pain and suffering she’s gone through, Avalinn was smiling and even giggled as she walked down the hospital hallway with the aid of a child-sized walker.

The tragic death of Annistyn and the trauma endured by the entire Rackley family, was covered by People magazine.

One line in the article stands out and was added as part of the headline — it was when the 7-year old was told that her older sister who was also her best friend had died. After a moment she said, “Then I’ll have to be the big sister to Lani.”

The Rackley’s heartwrenching story and Avalinn’s plucky determination apparently made it all the way to Mar-a-Lago, Florida. The former President and First Lady were clearly moved and sent the young girl two large boxes of gifts and a letter addressed to “Miss Avalinn Rackley.”

We are so encouraged by the strength and determination you have shown during this very difficult time. You will remain in our hearts for complete care and comfort as you continue to recover.

With your steadfast spirit, and the unwavering strength and support of your wonderful family and many friends, your future potential is limitless.

May God bless you and your family. 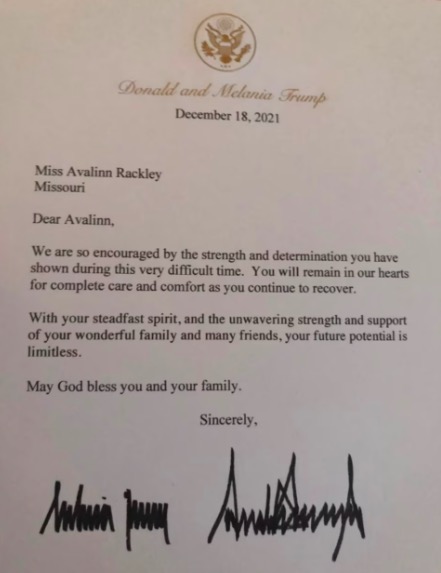 Avalinn’s grandmother, Pamela Moore, posted the video on Facebook showing little Avalinn all smiles and falling over backward onto the sofa in disbelief when she hears who sent the boxes.

‘These boxes came in the mail, and they are from…President Trump! Both of these boxes. Can you believe it?’ [Pamela] Moore says as Avalinn grins with expectation.

‘Oh my God!’ the brave little girl screams happily while wearing a back brace and matching Christmas onesies with her dad, Trent Rackley, who like Avalinn’s younger sister, Alana, suffered minor injuries.

Meanwhile, Avalinn’s mom, Meghan Rackley, is slowly recovering from severe brain trauma, but has since woken up from a coma and was able to say her mother’s name.

In a follow-up post with a screenshot of the letter, Moore wrote, “Donald and Melania Trump sent a package! They got hats signed by Donald Trump, Presidential blankets, American Girl Dolls, books signed by President Trump and Melania, pens, bracelets and so much more!”

The tornado that swept away the girls’ Caruthersville home flung them, their 3-year-old sister Alanna and their parents – Meghan and Trey – into a field, killing 9-year-old Annistyn and severely wounding Avalinn and Meghan.

The plight of the Rackley family captured the nation’s attention when a photo of Avalinn and her sisters taking shelter in their bathroom went viral after more than 30 tornadoes rampaged through Kentucky, Missouri and three other states in early December, killing at least 90 people. Sadly, their attempt at shelter did not succeed, with horrific tragedy ensuing.

Avalinn began a slow and steady stroll across her hospital room after a successful round of surgery for a broken vertebrae, while family members cheered her on as they found hope amid their tragedy.

Trey, 37, and Alanna suffered less severe injuries and have been released from the hospital.

Meghan, 32, who fell into a coma, was hospitalized in St Louis for severe brain trauma.
Source: Daily Mail

Although she’s shown some significant progress post-surgery, Avalinn has a very long way to go before she’s fully recovered which includes a tremendous amount of therapy. She will also have to wear a back brace for the foreseeable future.

While a truckload of gifts cannot erase the suffering of this family, the former President and First Lady were able to put a smile on the face of a child who has suffered so much loss but seems to be willing to face the challenges ahead of her.