Is this another example of the left’s corrupting of every institution to be little more than an echo chamber of the left’s agenda?

It was bad enough when talk-show host Bill Maher cheered on the possibility of a recession if that’s what it took to get Trump out of office (a recession that bankrupted other people, mind you, not multi-millionaire Hollywood elites). Video: Bill Maher Admits He Would Rather See America Suffer Than Trump Succeed

That agenda may have crushed lives, but it may not have necessarily ended them.

What about an agenda that deliberately delays the vaccine rollout until AFTER the 2020 election? Would that be putting a political agenda ahead of a medical plan to help people?

Remember, we all thought it was really strange that the vaccine announcement came out just days AFTER the election, didn’t we? We may know the reason for that. 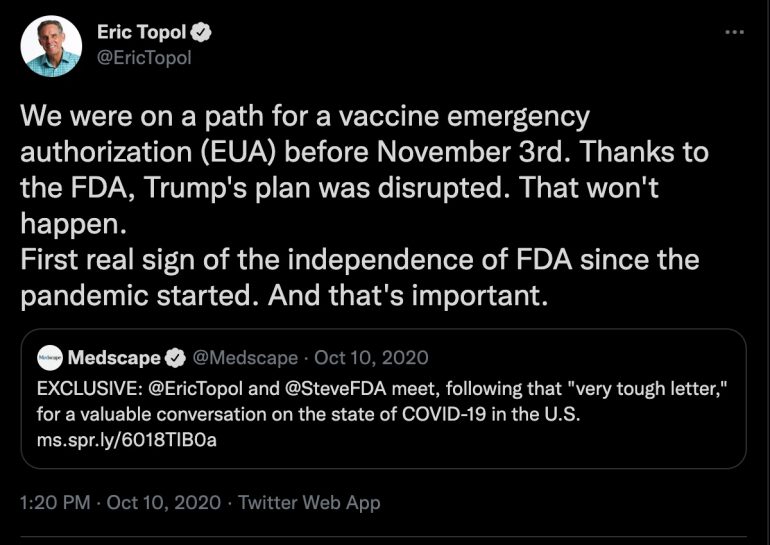 Independence of the FDA?

Are we so sure that’s what we saw here? Or did they just go rogue, as so many other agencies have? Hell, even Biden’s CDC has been getting its marching orders from the Teachers’ Unions. Those unions ‘just happen’ to be one of the biggest Democrat donors on the block. 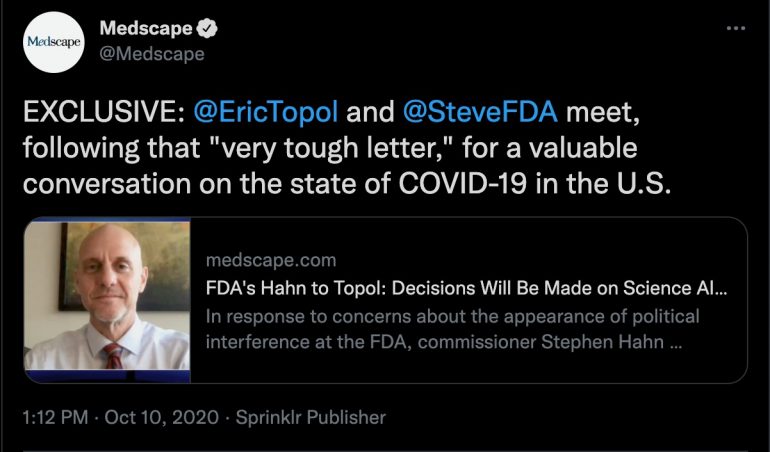 This led to a story in which the head of the FDA was interviewed (bullied?) by Eric Topol. That ‘tough letter’? It was insisting the testing be dragged out until late November. Remember, he specifically did NOT want Trump having a good news COVID announcement in time for election day, despite the surprising successes of Operation Warp Speed.

Here is one example of what Topol was saying to the head of the FDA, as published on Medscape (owned by WebMd) notice how he’s equating a fast rollout to being Trump’s puppet.

Both companies are putting in applications for an EUA and they have what seems to be a pretty solid footing. But here again, we have this obfuscation and appearance of interference because we see reports in the media yesterday and today that, again, the White House is exerting pressure on the process where it seems like it would naturally flow in a very positive direction. So this is an optics issue. Can you address that? —Medscape

Topol really REALLY doesn’t want an ‘October surprise’ of a vaccine rollout. He claims it is because an inferior and unsafe product would be rolled out and given to the public.

But now that Biden is safely ensconced in office, he’s happy to support the vaccines, even posting this tweet about the third booster.

He wasn’t always so eager.

Remember when Trump was released from Walter Reed, after recovering from the virus and offer a glimmer of hope? An article by MIT Technology Review talks about one doctor’s campaign to undermine it.

Across the country, in California, a doctor named Eric Topol was responding in real time on social media. He questioned the president’s health, his doctors’ actions, and even his mental status.

By that point Topol, a heart expert and researcher with a huge Twitter following of his own, was already weeks into a personal campaign to make sure the administration could not rush a covid-19 vaccine through regulatory authorization before Election Day on November 3.

An editorial in the New York Times had raised the possibility of an “October surprise” vaccine back in June, and warned that a vaccine approval could turn into a “campaign stunt.” Topol, who works at the Scripps Research Institute in La Jolla and is one of the country’s most prominent doctors, aimed to prevent Trump from greenlighting a vaccine before scientists could prove it to be safe and effective. To Topol, developing an effective vaccine against covid-19 is “the biggest event in our generation” and one that should be evaluated on the basis of scientific data, not political implications. —MIT Technology Review

One user provided a long and damning thread about Topol’s work, you might find interesting. (Click here to see it).

But we’ll feature just these from the set:

Just imagine shifting all of those classic Financial Times "vaccine effect" graphs backward by 6 to 8 weeks.

If only we had approved the vaccines before the 2020 election. pic.twitter.com/WaFFyQl59A

And the success of his pressure campaign:

Who else was putting political strategy ahead of the health of the nation? Pretty much everyone on the left.

As a cherry on top, pretty much everyone with a (D) after their name — including the media — was throwing cold water on the possibility that any vaccine would be ready in 2020, let alone several ‘in the next few weeks’.

Trump’s opponents framed him as lying about the promised vaccines, and the Feds helped them do it. To cast even more doubt on the vaccines, people like Kamala, Biden, and Cuomo were openly critical of the vaccine.

Was this delayed vaccine roll-out a political move?

We asked that question early on and still haven’t seen a satisfactory answer. Did Biden Collude With ‘Big Pharma’ To Slow-Walk The COVID Vaccine?

Should we file FOIA requests for any contact between any and all government agencies / employees / appointees / proxies and the management of Pfizer in the last 6 months of 2020?

We also know that Pelosi held back a round of COVID bailout money until after the elections so that she could blame Trump for making them suffer, and leverage that pain for more votes. Sadly, it worked. And a simliar play worked again in the Georgia Senate runoffs, without which, Kamala wouldn’t hold the tiebreaker vote that’s letting her party burn down the country. Pelosi Now Supports COVID Relief That She Blocked During Election — Here’s Why

They corrupt our institutions for their own political agendas and then marvel at the fact that people have lost confidence in them?