The preacher said that he wanted to “show” the kids how to be joyful by doing what makes him feel joy — which is putting on a dress, wig, makeup, and high heels.

The Washington Examiner reported that last Sunday, Aaron Musser, a seminarian who preaches at St. Luke’s Church of Logan Square in Chicago, decided to dress in drag as a sermon illustration of the “dress rehearsal” for the ultimate joy experienced upon the return of Jesus Christ.

It’s kind of weird that Musser feels “joy” in making himself into an absurd caricature of a woman.

It’s also completely incomprehensible how that can in any conceivable way relate to the second coming of Jesus, or is even remotely comparable to the joy that Christians will feel in finally seeing the Lord face to face.

But that didn’t deter Musser.

After reading a passage from the Gospels, the Drag Queen in a dress that looked like liturgical vestments invited children to come forward. “This is everybody’s first time they’ve ever seen a drag queen?” he asked the kids. “Well, hello. I am also a boy most of the time when I’m here, but today [tosses hair repeatedly] I am beautiful today,” he said.

He then read a story about joy to the kids, discussed the coming of Jesus, and said that “today is a dress rehearsal for joy so we know how to receive it when it comes” then lead them in prayer thanking God for joy.

St. Luke’s Lutheran Church of Logan Square posted photos of the event on Facebook with a caption that read:

“Today, we consider what it might be like to have a dress rehearsal for the kind of joy awaiting us on the other side of Advent. It’s been so hard to know what that joy will be, because it’s been so long since some of us have been joyful. It’s been a difficult and tiring couple of years.
And I decided instead of telling you, ‘this is how I want you to be joyful,’ as we prepare for this dress rehearsal, I figured I would instead put on a dress as so many who have inspired me have done. I decided to follow their example, showing that liberation from oppressive laws clears a path for joy.
But allowing yourself to feel joy can be scary. I wasn’t sure how the outside world would handle me when they saw me this morning. Joy is difficult to feel, it’s vulnerable. But isn’t it so beautiful?” 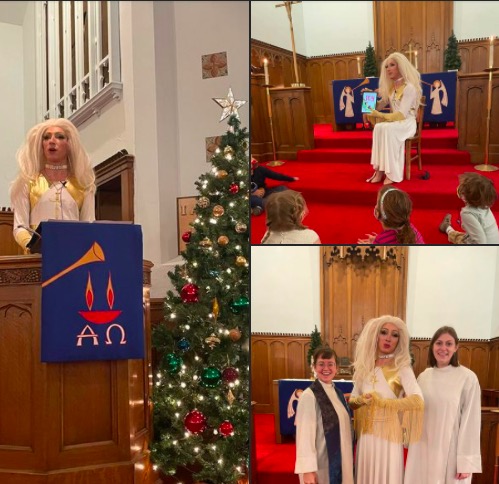 The “woke” church is so proud of this. Just look at their “joy” in the photo. 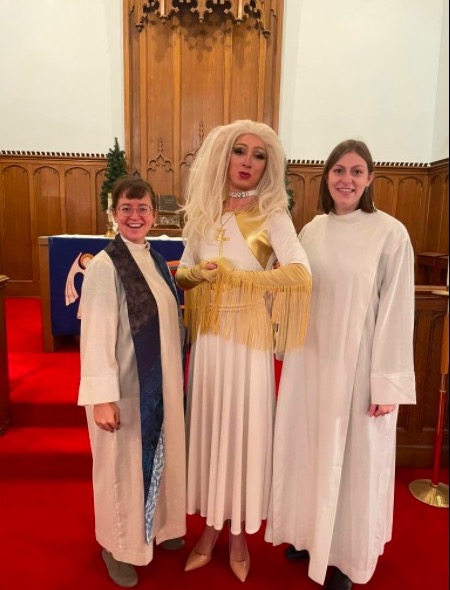 They have turned off the comments after receiving backlash, but also many thanks and praise for the “beautiful” expression of joy.

St. Luke’s responded to one commenter who quesitioned where the “queerness” was in the Bible with a link suggesting that Joseph’s coat of many colors was actually “a pretty princess dress” and suggested that David and Jonathan were more than friends. They also included a link to Queer Bible Hermeneutics which is just a load of “woke” garbage being inserted into texts because queer people want to see it in there.

“This is everybody’s first time they’ve ever seen a drag queen? Well, hello. I am also a boy most of the time when I’m here, but today I <tosses hair> am beautiful today.”

In the clip posted, Musser said, “I talked about joy as liberation or freedom to be who you want to be or do what you want to do.”

Historically, that’s not what “joy” means to Christians. Joy is an ability to be content in all things, even when in difficult circumstances because God is the source of our joy and we know that He is with us always.

Jesus Himself wouldn’t have been considered “joyful” according to Musser’s definition. Although Hebrews 12.2 says that Jesus, “for the joy set before Him endured the cross, despising the shame, and has sat down at the right hand of the throne of God” we also know that Jesus prayed before his arrest, “My Father, if it is possible, let this cup pass from Me; yet not as I will, but as You will.” Was going to the cross the thing that Jesus wanted to do?

The passage Musser read was John the Baptist saying that Jesus was coming to baptize with fire and will separate the grain from the chaff. Ironic.

Over the last few years, we’ve seen how children are becoming increasingly exposed to Drag Queens through things like “Drag Queen Story Hour” at many public libraries.

National Review writer and religious liberties attorney, David French, must be thrilled that this “blessing of liberty” of Drag Queens has expanded past the library and into churches.

We’ve also seen how this overtly sexualized and very adult performance doesn’t adapt well to an audience of children. There are multiple videos available of Drag Queens stripping, twerking, and even flashing their crotch to children. Of course, some of them are teaching the idea that gender is fluid, which can be confusing and frightening to young, impressionable children.

Even PBS is pushing Drag Queens on kids with your tax dollars.

If you oppose this sort of thing and want to say… pray for the kids that are being exposed to these men dressed as women, it could land you in court.

It seems that even churches are no longer safe-havens from the attempt to indoctrinate children into accepting all sorts of aberrant overtly sexualized behavior as normal. It’s really quite sick.

What is incredibly insulting about this caricature of womanhood from the pulpit is that it’s happening at this particular time of year, when Christians celebrate the birth of Jesus — which would not have come about without an ordinary girl from a no-horse town, whose obedience and trust in God allowed her to be the one to bring His Son into the world to save all of mankind. She was only able to do this because of her womanhood. To mock womanhood during Advent is just obscene.

Womanhood itself is under attack by men who think that putting on heels and make up is what constitutes being a woman or is acceptable because it makes them feel “joy.”

Perhaps a better example of “joy” would have been to read Mary’s Prayer — The Magnificat from Luke 1:46-55.

My soul exalts the Lord,
And my spirit has rejoiced in God my Savior.
For He has had regard for the humble state of His bond-servant;
For behold, from now on all generations will call me blessed.
For the Mighty One has done great things for me;
And holy is His name.
And His mercy is to generation after generation
Toward those who fear Him.
He has done mighty deeds with His arm;
He has scattered those who were proud in the thoughts of their hearts.
He has brought down rulers from their thrones,
And has exalted those who were humble.
He has filled the hungry with good things,
And sent the rich away empty-handed.
He has given help to His servant Israel,
In remembrance of His mercy,
Just as He spoke to our fathers,
To Abraham and his descendants forever.”

Mary was a woman of faith who embraced who God had made her to be. And Christians still call her blessed.

Doug Giles has a great chapter on Mary in his book that was released last year.