It’s no secret that Trump’s political enemies have been willing to use every dirty trick at their disposal in their efforts to destroy him — and that hasn’t changed with his leaving office.

Even before his inauguration, Clinton flunkies had published their plan on how to down Trump. Impeachment was already one of the plans. Here are a couple of screenshots:

Any of that sound familiar? It should. You can read the rest here: Media Matters War Plan 2017 by David Brock

Case in point, Letitia James actually ran on the promise of using her office for the purpose of attacking Trump, notwithstanding the fact that targeting a man to look for his crime is the Stalinist approach to law, which is exactly the opposite of the American method which requires starting with the crime and looking for the perpetrator.

James has announced yet another investigation into Trump one called for by another political enemy, race-faker Elizabeth ‘High Cheekbones’ Warren. Pocahontas Weaponizes Government — Sends SEC Against Trump’s Tech Startup

Since malicious prosecution is a violation of the rights of an American Citizen — even if you happen to be famous and hated by a poisonously partisan ruling party — Trump has legal recource if he feels he is being unfairly targeted.

Can he prove malicious intent?

Well, it isn’t as if his enemies have been hiding it. Here is a video featuring clips of the AG as put out by Trump’s legal team.

"Letitia James targets Pres. Trump with a callous disregard for the ethical and moral obligations she swore to abide by when she became AG. She has short changed the state by commencing this partisan investigation and… pic.twitter.com/Rtgh4axiGz

Mr. Trump’s lawsuit comes less than two weeks after Ms. James signaled that she would seek to question Mr. Trump under oath early next month, on the same day that she dropped out of the race for New York governor.

“I have come to the conclusion that I must continue my work as attorney general,” Ms. James said. “There are a number of important investigations and cases that are underway, and I intend to finish the job.”
Mr. Trump’s lawyers said at the time that they would ask a judge to quash the subpoena, and they are still expected to do so in the coming days.
A lawyer for Mr. Trump, Alina Habba, said in a statement that Mr. Trump’s lawsuit was an effort to stop Ms. James’s “bitter crusade to punish her political opponent in its tracks.”

…Mr. Trump’s suit seeks to bar Ms. James’s participation in the criminal investigation as well, arguing that the parallel civil and criminal probes are inappropriate. —NYTimes

As just one example of that political animus in her own words, she sent this tweet (it included an embedded campaign video) on July 1, 2018. 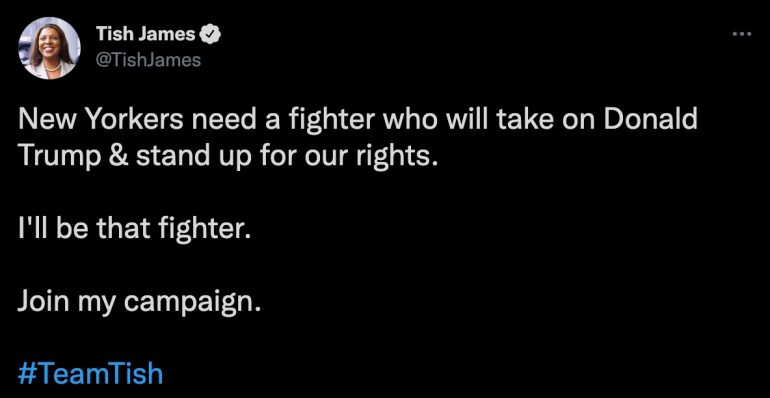 In response to her announcement that she would subpoena Trump…

Trump condemned her move as a political stunt in a statement last week.

“Letitia James wants to politically weaponize her position as Attorney General instead of exemplifying impartiality and protecting the interests of all New Yorkers,” Trump wrote in a statement on Wednesday. –Breitbart

Trump isn’t like so many gutless politicians that run from a fight. Trump runs TO the conflict. He’s ready and willing to take on all comers.

In a time when that kind of intestinal fortitude is rare, especially among our public figures, we could learn a thing or two from that kind of example. We can even apply it to our prayer life.