They love boasting about ‘the science’ but as soon as they open their mouths on the issues, they’re in way over their heads.

And for the love of all that is holy can somebody get these clowns up to speed on the nomenclature? People from the President and his spokesclown on down to the media and lesser elected Democrats all seem to be tripping over the word ‘omicron’.

Omicron is a letter of the Greek alphabet.

But Omni-cron? What in the hell is that? It sounds like your trying to blend omni- (all) and chronos (time), which ironically seems to be the precise length of time for which they all want this damned pandemic to drag on.

Now that we’ve got that out of the way, we can turn our attention to the meat of what the Governor is trying to say in this clip.

Wait. What? Washington state Governor Inslee vows action on COVID "no matter what the science tells us." pic.twitter.com/MtIleBQffr

What a gong show. Where to begin?

We don’t know much about ‘omicraw’ (yikes!). So you should get a vaccine. Because of Delta.

Uh-huh? Really? That’s how you think this works, is it?

We just ran a story about a triple-vaxxed doctor from Israel who says got this new variant while attending a mecdial convention in London before omicron was announced in Africa.

But the very first thing he has to say about this new variant is — get vaccinated. It gets better when you try to look at his reasoning.

His logic, basically, is this: because of the new variant, get vaccinated. Because of Delta.

News flash, Jay, Delta is not the new variant. It’s the one that has been lingering around here like a bad smell. And like any other coronavirus, it has a short shelf life.

Let’s look at some science.

There’s a little video with some graphs that chart the spread and dominance of each different variant from January 2020 until the present day.

If you reset the video and let it play through, you will see the rise of the alpha and beta variants, and how those variants burned themselves out as they infected everyone they were likely to infect before giving way to the next variant took its turn in the around-the-world tour, dominating and replacing its predecessor.

On that same page is a chart showing why this new variant has been dubbed a super mutant by the press. 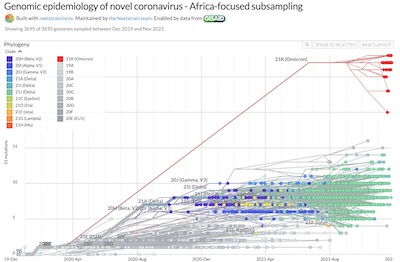 The vertical axis indicates the degree of mutations, the horizontal axis represents days passing since the pandemic began. While the genetic signature for most of the earlier strains is clustered fairly close to the x-axis, this new one appears much higher on the graph. This means it is substantially different from its predecessors.

This is why it is fair and accurate to say there is a lot we don’t know about it. But that ignorance cuts both ways.

We already know that the ‘jab’ that was supposed to keep us from getting infected or infecting others has not done a very good job of either. On what basis should we rationally expect the shot would be any more effective against this latest, substantially mutated version?

How science-y does this blather sound?

“There is much we don’t know about ‘omicraw’. We know that we will have more information in the upcoming weeks. But the one thing we know about omicron — and this is a certainty — it makes sense to get vaccinated today no matter what we find out about omicron. Because right today, we are threatened by Delta. It would be really sad if people lose their lives today because they’ve been killed by the Delta variant while they’re worrying about omicron today. And we really urge people to get their first vaccine and their booster at the appropriate time, and now everyone over the age of 18 is eligible for a booster at the appropriate time. That’s the take-home message about ‘omnicron’.

So, there is one thing he knows as a certainty about the new variant on the block. What is that one thing?

It is yet another imperative for you do to the exact course of action he and those who share his perspective have been trying to comply with since before this new variant existed.

This PSA has nothing to do with this new variant. We know this to be true, because we have no data whatsoever on which to base any confidence of vaccine efficacy. Inslee admitted the scientific ignorance. We don’t even know whether this strain is very dangerous yet.

As for the vaccine offering protection, even the variants we already have are pretty hit-and-miss. ‘Break-through cases’ aren’t even newsworthy anymore.

This announcement isn’t the sharing of a scientific update to bring the public relevant information in real-time. It’s just another do-as-we-say Government PSA to scold those horrible people who refuse to comply.

And they can’t help but tip the hand about how weak their reasons in favor of doing what they’ve asked are by framing their arguments in the language of either guilt, fear, or some variation of an ‘or else’ to the non-compliant. Lockdowns, maybe. Or fines.

Australia has already begun a system of police-assisted involuntary imprisonment of citizens who have been deemed a health risk despite showing no sign of an infection… even if there are multiple negative virus tests.

This fight is going to get harder before it gets easier. Time to break out the big guns.