Republicans are the personification of evil, just ask any Democrat, and they’ll pull out their secret decoder rings to prove it.

Nothing done by a Republican is done on principle, and there is never such a thing as a simple mistake.

It’s always nefarious in some way… but it takes the keen eye of a Democrat to help us sort out what the moral outrage is in individual cases. It’s tough for ordinary plebs like you and me to sort out what’s ‘racist’ or ‘sexist’ or due to the dark forces of ‘dark money’.

But Dems are more than happy to offer their expertise in these cases, roundly denouncing Republicans for obscene behavior… often followed by questions about what, exactly, it is they are denouncing this time.

It was earlier this year when AOC rallied her social media followers to denounce Ted Cruz over his famously ill-timed family trip to Cancun, which happened to fall in the middle of a crisis which she conveniently classified as an ‘environmental’ crisis. 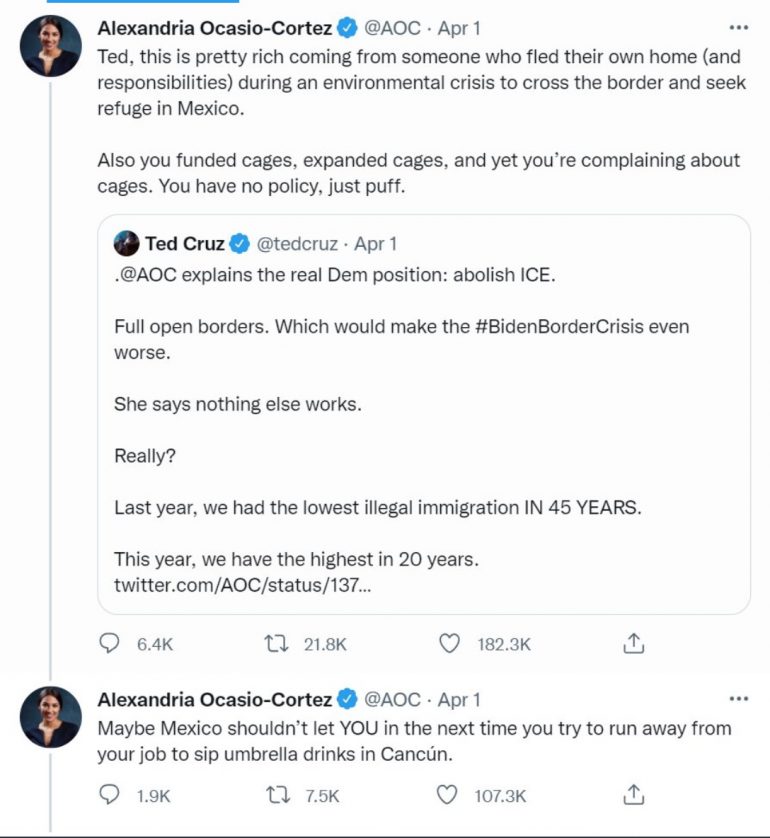 According to the Nuclear Regulatory Commission, the shutdown of the nuclear reactor was caused by a disruption in a feedwater pump to the reactor, and that caused the plant to trip automatically and shut down early Monday. — MSN

But that story, dated February 17th didn’t stop her from repeating the Gaia-worshipper propaganda more than a month later. Why should it, if she’s already on record saying, in an Anderson Cooper interview in which she was asked about her 4-Pinocchio comment ‘I think that there’s a lot of people more concerned about being precisely, factually, and semantically correct than about being morally right.’ (citation, ‘Red State‘)

She’s got a fast-and-loose relationship with reality and has said so. Duly noted.

The nub of her accusation was that, during a crisis that his constituents had to muddle through, Ted Cruz ran away and when somewhere he could enjoy the hot sun and cold drinks.

Did you happen to hear what the COVID numbers are in Biden’s America? There are RECORD cases. There are tens of thousands of cases in Florida — that ‘icky’ red state that Democrats love to demonize in public but slip away to when they think nobody’s looking.

Not only are there record numbers of COVID cases in America, but New York has the most cases it has EVER had. And what did Alexandria do for the citizens who sent her to DC to represent their interests? She hopped a plane to enjoy the hot sun and cold drinks in … the evil red-state of Florida. 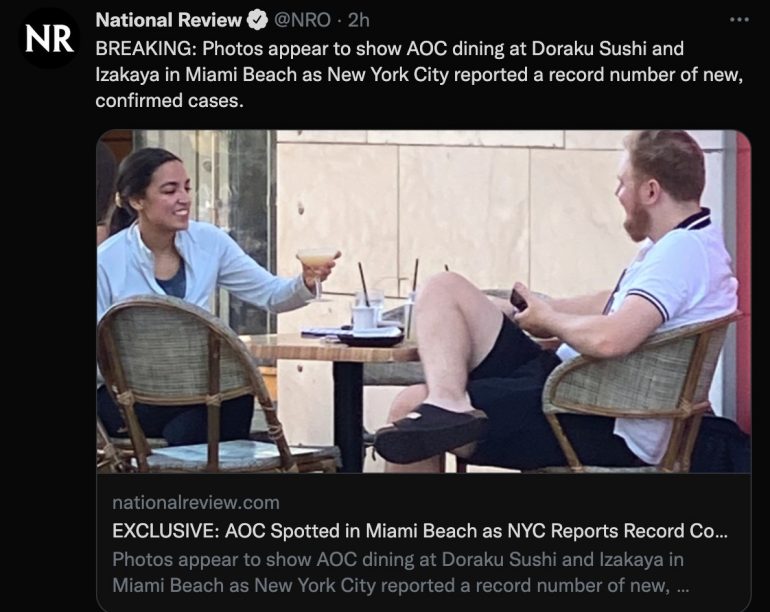 And wait, is that a cold drink in her hand? My goodness, it is!

Cold drink. Hot sun. Running away in a crisis. That dig at Ted Cruz has officially just boomeranged, hasn’t it?

Representative Alexandria Ocasio-Cortez was spotted dining in Miami Beach, Fla., on Thursday, according to a tip received by National Review, on the same day that her native New York City reported a record number of Covid-19 cases.

Photos obtained by National Review show Ocasio-Cortez seated outside Doraku Sushi and Izakaya in Miami Beach Thursday afternoon, raising a cocktail in one and checking her phone in another. —NationalReview

Lots of people look up to AOC as a hero. They’re thinking too small.