The Shambling Husk of Mediocrity was trotted out before the Press for nearly two hours yesterday. If that performance is any indicator, now you know why his handlers continue to hide him in the basement.

On Wednesday, President Biden held his 10th presser in his first year in office, which is far fewer than his predecessors who were logging in double or even triple the number of press conferences.

It was quite a doozy. He spoke on his own for just a few minutes, then went to

That’s two hours of my life that I’ll never get back.

But these are the sacrifices that we make to report on this disastrous administration.

In his brief remarks, Biden came out of the gate talking about COVID and tried to pad his

The shocking thing about this presser wasn’t Biden’s statements — it was the way that the Corporate Media actually asked him some tough questions.

Biden then went to his handy-dandy list and took questions.

The first question from Zeke Miller of the Associated Press was a bit of a shocker. Miller hammered Biden with his failed agenda and asked if he thinks that he “overpromised” in his platform. Biden denies that he did, and points back to Obamacare as a win… which is just unreal.

He then asks what Republicans are “for” implying that they’re just reactionaries. That’s pretty rich coming from a guy that reversed every single thing that his predecessor did simply because he was Donald Trump

Biden begins by taking a question from Zeke Miller framed around how bad things are right now.

“Why are you such an optimist?” Biden replies, sarcastically. pic.twitter.com/wTbBEumubS

Despite having control of the White House, the House, and the White House, Biden attributes the failure to pass his signature pieces of legislation in his first year in office to… Republicans. Of course.

In response to a question about if he needs to scale down his legislative ambitions, Biden points out that polling indicates the American people are largely behind his priorities pic.twitter.com/WxsB6Ln0n0

President Biden blames Republican senators in fear of “one man out of office” for the lack of bipartisan support for his agenda. pic.twitter.com/DnmV2ByDbR

Biden’s favorite subject is clearly the pandemic. After all, it was the railing against Trump’s response to COVID and the ability to hide in his basement for months that got him elected in the first place. (Not to mention Democrat-controlled swing state fiddling around with election rules because of the pandemic.)

He says that there should have been more of a focus on testing even though Democrats were blasting Trump for not providing more tests.

Biden has had a full year now to deal with that.

BIDEN: “On testing, we should’ve done it quicker.” pic.twitter.com/hJgPbUZEHE

The Biden-Harris administration also rejected a plan to ramp up testing before the holidays. And then Omicron hit.

And don’t forget that it was just a few weeks ago that the President said that there was “no federal solution” to the pandemic in a response to concerns from Governor Hutchinson of Arkansas that the Feds providing “free tests” would eat into the supply that state governments had at their disposal for their response.

Suddenly, there is now a federal response with millions of test kits and millions of N95 masks available for “free.”

Biden blames the Federal Reserve for inflation and wants them to do his bidding in order to bring prices down. Unbelievable.

Biden blames inflation on COVID and the Federal Reserve pic.twitter.com/FpyMNPIECG

It’s just a fact that some school boards are pushing to keep schools closed because it’s “not safe” with Omicron spreading. This is especially true in Democrat-run districts. Just look at what happened with the schools in Chicago recently.

You can see with the graph below from Burbio which tracks interruptions of in-person learning that school closures are still happening. 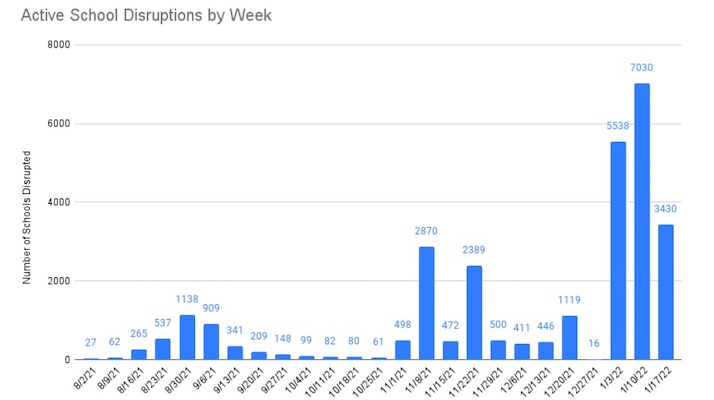 Pres. Biden on school closings due to Omicron: ‘Let’s put it in perspective — 95, as high as 98% of schools in America are open, functioning, and capable of doing the job’ pic.twitter.com/GIb5dbqE8V

Biden blasted the framing of the question. I’m old enough to remember when that sort of thing was frowned upon and was considered an attack on the free press.

The President says that you’re supposed to believe him about the supply chain, and not your own lying eyes.

It looks like Joe is actually admitting that he can’t just ram through this massive 41.7 trillion spending bill with a slim Democrat majority in a midterm election year as his polls continue to take a nosedive.

So, he’s not completely delusional.

‘I think we can break the package up, get as much as we can now, and come back and fight for the rest later,’ said President Joe Biden of his landmark $1.7 trillion Build Back Better legislation that has stalled in the Senate https://t.co/n4CPOBOOZx pic.twitter.com/nbPfKmoc5A

He thinks that Russia is going to invade Ukraine. Again. Just like Putin did in 2014 back when Joe was Veep.

Biden: “My guess is [Putin] will move in” to Ukraine pic.twitter.com/yappujsiyw

Biden seems to think that a “minor incursion” of Ukraine — whatever that means — is totally fine.

NOW – Biden on Russia invading Ukraine: “It depends on what it does. It’s one thing if it’s a minor incursion…”pic.twitter.com/vnkySSSX9f

“Officials in this country and very likely in Russia tonight are wondering: did President Biden just give Vladimir Putin a green light to launch an invasion into or around them?” pic.twitter.com/dvZKL1BVBb

The President of Ukraine had some thoughts, too.

Yikes! That is perhaps the most polite b*tchslap from one international leader to another that I’ve ever seen.

It’s kinda weird that Putin didn’t invade Ukraine when his “asset” Trump was in office, eh? Maybe MSNBC’s Rachel Maddow can explain that one if there is a “minor incursion” under Clueless Joe.

9. Angry Joe tells a reporter to “read the transcript.”

Biden promised he’d bring unity to a divided country, but all he’s done is foment division. Then, he got angry when he was called out by Philip Wegman of Real Clear Politics for comparing those who oppose the Democrat voting legislation to racists and segregationists.

“Go back and read what I said” pic.twitter.com/gpdPju14hC

Remember, this is the same guy who ran on the Charlottesville Fine People Hoax that is easily exposed by watching the full clip or reading the transcript.

Biden was asked if the 2022 midterms would be “free and fair” if the Democrat bills to federalize elections failed.

The President cast doubt on the outcome of future elections if the partisan legislation isn’t passed.

REPORTER: Will the midterm elections be fair and legitimate if the voting bill isn’t passed?

BIDEN: “It depends on whether or not we’ll be able to make the case to the American people that some of this is being set up to try to alter the outcome of the election.” pic.twitter.com/COCp5RSfXB

He was asked a second time to clarify his statement, and… it just got worse.

Joe Biden is asked by @PhilipWegmann is the 2022 election results could be illegitimate:

“I think it could easily be illegitimate” pic.twitter.com/xSlJWLNdCB

Does that mean that 2020 wasn’t a “free and fair election” because it occurred before Democrats could put their thumbs on the scale with their single-party-backed legislation?

One thing to note  — Philip Wegmann may well have ticked off Incompetent Joe even more than Peter Doocy did.

He insists that the bungled evacuation of Afghanistan was a success.

Biden on Afghanistan: “I make NO APOLOGIES for what I did.” pic.twitter.com/Uv6uhzNa20

Perhaps he should get one of those “No regerts!” tattoo to commemorate the withdrawal.

Every single American should be livid with this response.

12. Dementia Joe evades a question about his mental fitness

REPORTER: “Why do you suppose such large segments of the American electorate have come to harbor such profound concerns about your cognitive fitness?”

BIDEN: “I have no idea.” pic.twitter.com/lcVi73WUSw

You may recall that Obama’s “Wingman” at the DOJ, then-AG Eric Holder, secretly designated Rosen a “criminal co-conspirator” and a flight risk under the Espionage Act. Rosen was working at Fox News at the time.

Maybe that’s why Biden got snippy.

The answer is that he’s trying to appeal to his base and he doesn’t give a damn about the people who didn’t vote for him, and his party has shifted far to the left.

As things drew on, it was clear that Joe was losing steam.

If you don’t want to sink 2 hours, the GOP’s rapid-response guy has got your back. He’s condensed this disastrous presser down to 60 seconds, and it’s really quite something.

I watched all of Biden’s disastrous press conference today so you didn’t have to, and condensed it into 60 seconds: pic.twitter.com/0PCKb9Dd8t

That was so much more manageable.

Most of us can only handle Joe in small doses — quite frankly, the smaller the dose, the better.