When the #1 ranked tennis champion showed up to compete in the Australia Tennis Open, he thought his doctor-signed vaccine exemption was good to go. Now he’s fighting deportation.

For this story to make any sense at all, we must first realize how far up the panic scale Australia has gotten in their COVID paranoia.

Australia shaking in their boots over Omicron variant

Xi’s Omicron strain was first identified in South Africa. The virus was so very ‘scary’ there that the country has already gone back down to its lowest COVID alert status after having it rip through the country for the last 6 or 8 weeks. Even WaPo and NYT were willing to admit that there was no corresponding spike in deaths.

So what has Australia done in response? They’ve gone full authoritarian lockdown.

If you’re not vaccinated, you can no longer leave your home even to go to work or get light exercise:

Mentally ill #Gunner shows his psychotic tendencies fully in this video as he goes after the non jabbed to try and use them as the scapegoat. We have been here before and it didn’t end well. #AustraliaHasFallen pic.twitter.com/B7VBOzwZn3

Australian Open opens soon, but their #1 Champion has not shown evidence he is vaccinated

The top-ranked Djokovic wrote on Instagram on Tuesday he has “an exemption permission” to travel to Australia.

Djokovic, who is seeking a record 21st Grand Slam singles title, has continually refused to reveal if he is vaccinated against the coronavirus. The Victoria state government has mandated that all players, staff and fans attending the Australian Open must be fully vaccinated unless there is a genuine reason why an exemption should be granted.

Australian Open organizers issued a statement later Tuesday to confirm Djokovic will be allowed to compete at the tournament, which starts on Jan. 17, and is on his way to Australia. He earlier withdrew from Serbia’s team for the ATP Cup, which started last weekend in Sydney. —NewYorkPost

Here’s a little more detail about those requirements.

The state government for Victoria, where Melbourne Park is located, mandated full vaccinations for all players, staff and fans at the Australian Open unless there is a genuine medical reason. Victoria state Deputy Premier James Merlino said medical exemptions would not be “a loophole for privileged tennis players” and would only be possible in “exceptional circumstances if you have an acute medical condition.” Tennis Australia said Djokovic’s request for an exemption “was granted following a rigorous review process involving two separate independent panels of medical experts.” Neither Tennis Australia nor Djokovic revealed the reason he sought an exemption. Australian Open tournament director Craig Tiley said a total of 26 players or support staff applied for exemptions and a “handful” were granted. Among the acceptable grounds were acute major medical conditions, serious adverse reaction to a previous dose of a COVID-19 vaccine or evidence of a COVID-19 infection within the previous six months. — MySanAntonio

So, Australian Open said everything is a go. That solves it then, right? Open-and-shut?

He’s off to defend his titles?

The world No. 1 had his visa canceled on arrival in Melbourne on Wednesday after authorities rejected his request for an exemption from Australia’s requirement that visitors be vaccinated against the coronavirus. Rather than leave the country, he lodged an appeal and is being held at a hotel for undocumented immigrants until the hearing can take place.

“Mr. Djokovic is not being held captive in Australia,” Home Affairs Minister Karen Andrews told the Australian Broadcasting Corporation on Friday. “He is free to leave at any time that he chooses to do so and Border Force will actually facilitate that.” –MSN News 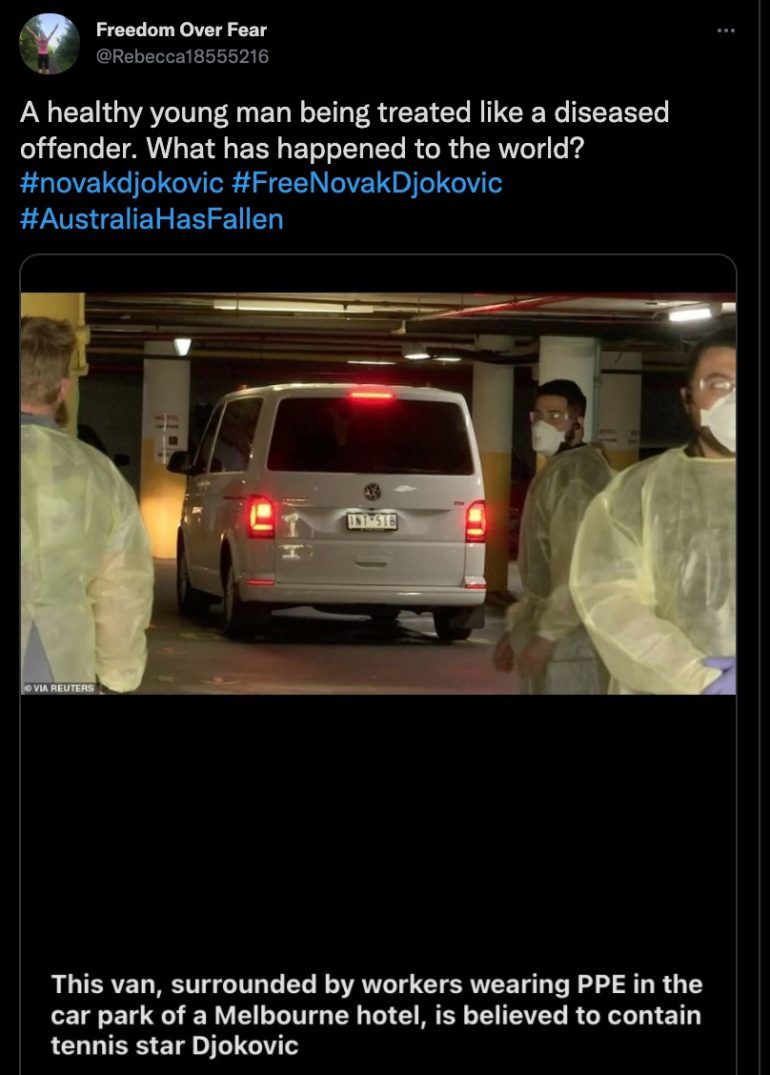 “Novak Djokovic is not a criminal, terrorist nor illegal immigrant, but he has been treated as such by the Australian authorities, which understandably triggers the indignation of his supporters and Serbian citizens,” Serbia’s foreign ministry said in a statement.

The ministry’s state secretary, Nemanja Starovic, spoke to the Australian ambassador to demand Djokovic be transferred to “adequate accommodation for a sportsman of his caliber” while awaiting the court decision, according to the statement. Starovic said he did not want to interfere in Australian court decisions but urged Australia to allow Djokovic to change locations in time for Orthodox Christmas on Friday. –MSN News

A federal judge will take up the case next week. A lawyer for the government agreed the nine-time Australian Open champion should not be deported before then.“I feel terrible since yesterday that they are keeping him as a prisoner. It’s not fair. It’s not human. I hope that he will win,” Djokovic’s mother, Dijana, said after speaking with him briefly by telephone from Belgrade.She added: “Terrible, terrible accommodation. It’s just some small immigration hotel, if it’s a hotel at all.” —NewsTimes

There is another question — if Australia blocks the champion from competing, what does that do to their relationship with professional tennis — and other future sporting events?

Whatever happened to the badass we-can-do-what-we-want reputation Australia had back in the 80s?

Are they forever neutered? Or will the Australia we once respected make a comeback someday?