They say that this is to prevent child sex abuse. Who in their right mind believes this?

The Prostasia Foundation is a California-based nonprofit organization that promotes itself as an organization to “protect children” from sexual abuse. The organization’s real goal, however, seems to be to normalize pedophilia.

Any right-thinking human being could see that with their recently-published suggestions on how to prevent child sexual abuse.

They suggest that the way to stop abuse is with three things that they consider “public health” issues:

2. Free, anonymous, stigma-free support for all.

3. Social services for teens including housing and cash benefits.

Alright, before we dig into the perversion that these “child protection advocates” mean by “comprehensive sex ed” — let’s just note that the third suggestion includes getting teens social services that include housing — presumably away from parents and guardians, and the second is for “free, anonymous, stigma-free support” for everyone. Why do these leftists always want taxpayers to pay for everything?

The organization says that sex ed should be “centered on sex positivity and consent” in order to give students “a much better chance of leading ethical and satisfying sex lives.”

Sex-positive education is the best way to prevent the sexual abuse of children, says the group that wants to “destigmatize” pedophiles by calling them “Minor-Attracted Persons” (MAPs). And what they mean by “sex-positive” is the idea that “whatever comes naturally to you sexually, is OK so long as you and any partners consent.”

While they do say that the legal age of consent can differ depending on where you live, it’s best to err on the side of caution and treat only those 18 and up as able to give consent. Although, they also say that “it makes sense to lay the groundwork” for a “comprehensive sex ed” well before puberty.

Prostasia says that they want to “meet people where they are” and that abstinence-only education just doesn’t work, so we should be teaching children about fetishes and kink, including something called “chronophilia.”

One of the main fetishes Prostasia suggests should be part of that “comprehensive sex ed” is “chronophilia.” This taboo, they write, is one that “many don’t even know about until it becomes part of their lives.” They say that people who are sexually attracted to children are just born that way. “The best science we have on hand right now is that minor attraction is something you are born with and can’t change,” they say.

Prostasia claims that this is “simply a scientific way of talking about how for some people, they are sexually attracted to others in a particular age-range, which may not match their own age.” Chronophilia, they write, “go beyond minor attraction, there are age related sexualities on the other side as well.”

And they put the emphasis on the potential sexual attraction that minors may have for adults. “Minors can have little to no attraction to those in their own age group while being attracted to adults in general (though the onus is always on the adult to say no.)”

All of this is why Prostasia thinks children should be taught about chronophilia as a kink, a fetish, and have no shame or taboo around it, writing that “making sure people understand what a chronophilia is and how they can present is a really good way of preparing people for what may not be the straightest path.”
Source: The Post Millennial

Why is the proposed solution to just introduce sex ed earlier and earlier? It’s insanity. There is a concerted effort to take away children’s innocence and teach them about sex at a young age… for their own sexual health, of course, say the advocates.

Prostasia was in the news late last year when a prof from Old Dominion University was speaking at one of their online forums calling for pedophiles to be referred to as “minor-attracted persons.” The professor has since resigned.

They suggest that teaching kids about fetishes is totally fine, and doesn’t even need to be explicit — just use examples that they can understand like candy and video games.

Gee, what could possibly go wrong with that? It’s not like the U.S. has a problem with kids that are addicted to sugar and video games, right?

So, their plan to prevent child sexual abuse appears to be to teach pre-pubescent children that pedophilia is a normal, sexual attraction while simultaneously teaching about pleasure through sex-positive education. Oh, and sex is like candy and video games. But hey, all you need is the consent of two parties…

But don’t worry. Our Corporate Media betters are probably out in force exposing this attempt to normalize pedophilia, right?

NBC contributor Noah Berlatsky is now the Communications Director for Prostasia, a not-for-profit group that is reportedly attempting to legitimize pedophilia under the guise of helping children. As part of his work with the group, he has written about legitimizing “trans children,” conducted interviews about the positive impact of pornography on children, and how the best way to help children who are trafficked into the sex trade is to “decriminalize the sex industry.”

Prostasia offers pedophiles a MAP Support Club, which “is a peer support chat for minor attracted people who are fundamentally against child sexual abuse and committed to never harm children, and is a safe space to have peer support in times of trouble.” This group is for people who are aged 13 and up.

For pushback on Prostasia’s efforts to “destigmatize” pedophilia, downplaying of child trafficking, railing against bans on child pornography, and normalization of perversion, you have to go to independent media.

Anna Slatz wrote in 4W, “Prostasia sees the threat pedophiles pose to children as a bogeyman dreamed up by the alt-right, while condemning anti-pedophile sentiment as harmful ‘Nazi-like’ rhetoric which requires mass censorship across social media.”

She uncovered a tweet from Dr. James Cantor, part of the Prostasia team, who advocates for the idea that pedophilia is an innate condition, in which he said that pedophiles should be included in the LGBT identity alphabet. Cantor wrote: “Speaking as a gay man, I believe we SHOULD include the P. To do otherwise is to betray the principles that give us our rights.” For Cantor, pedophilia is just another kind of queer.
Source: The Post Millennial 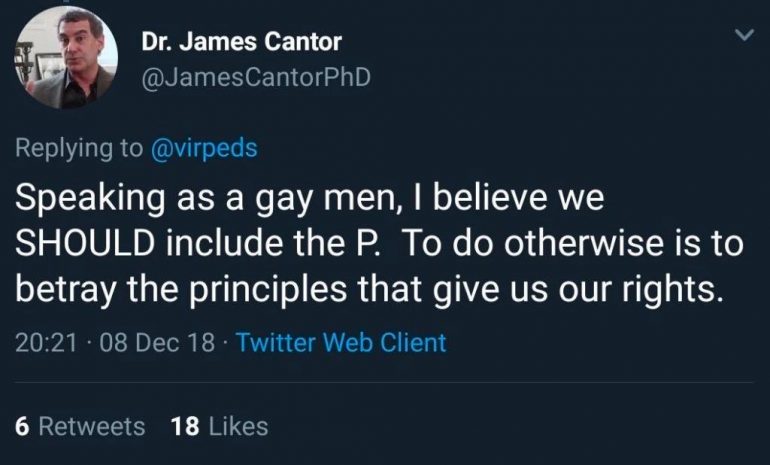 These are sick people who really don’t like criticism.

What’s wrong with showing some concern when people want to “educate” children about sex while they simultaneously want to destigmatize pedophilia?

That’s normal for parents who want children to remain innocent until they can actually comprehend what sex is.

So, parents and grandparents — be aware of Prostasia and if they endorse a sex-ed curriculum in your child’s school, get loud about it. That is — if your kids are still in public schools.