Trudeau will be isolating himself for five days just as what may very well be the longest truck convoy ever rolls up to Parliament Hill. Convenient timing.

In an extremely short-sighted move amidst a supply chain crisis, both the Biden-Harris administration in the U.S. and the Trudeau administration in Canada have imposed vaccine mandates for truckers carrying goods across the border.

What is the point of these vaccine mandates when we know that both the vaxxed and the unvaxxed can get and spread COVID? Why are they still pushing for them when an advisor on Israel’s COVID response admitted that governments have been using coercive measures to get more people vaccinated?

Because… the governments are using coercive measures to force people to be vaccinated. And a lot of the time, it works. COVIDictators don’t seem to realize that giving people the “choice” to take the vaccine in order to keep their jobs is not actually a choice. They’re taking the vaccine under duress.

Why should truckers — who are essential workers, by the way — be forced to get the jab if they drive for long hours alone, and so many of them probably already have natural immunity from having recovered from the virus?

Canadian truckers have had it with Canada’s authoritarian Prime Minister stomping on the rights of Canadians, so they’re headed to Ottawa to make their point.

You’d think that Prime Minister Justin Trudeau would respect the rights enumerated in the Canadian Charter of Rights and Freedoms since that document was the legacy project of his father, former Prime Minister Pierre Trudeau.

The cross-border vaccine mandate came into effect on January 15, but there was some confusion about it from the very beginning. The government initially stated that the mandate applied to everyone but non-Canadian citizens crossing the border would have no test and quarantine option that would be permitted for unvaxxed Canadian truckers. The government walked that back just a few days before the mandate was to come into effect saying that there would no longer be a test and quarantine option.

That ticked off the truckers, so they decided to do a little “community organizing” and take a convoy straight to the belly of the beast — Parliament Hill in Ottawa, Ontario.

They call themselves the “Freedom Convoy 2022” and have raised almost $6 million on GoFundMe to cover travel expenses like gas, food, and lodging for the lengthy trip. GoFundMe has frozen the money until they can get “transparency” on how the funds would be used.

Truckers rolled out of British Columbia on January 21 and the convoy is expected to arrive in Ottawa on January 29.

Of course, the convoy wasn’t covered in mainstream news until it became so huge that even the government-funded broadcaster couldn’t ignore it. So, they lied about it and claimed that the protest was about “road conditions.”

This is hilarious. The trucker convoy protesting the vaccine mandate has gotten so large the media can’t ignore it – so instead they report that they’re protesting the weather. https://t.co/hNa55Hh4ug 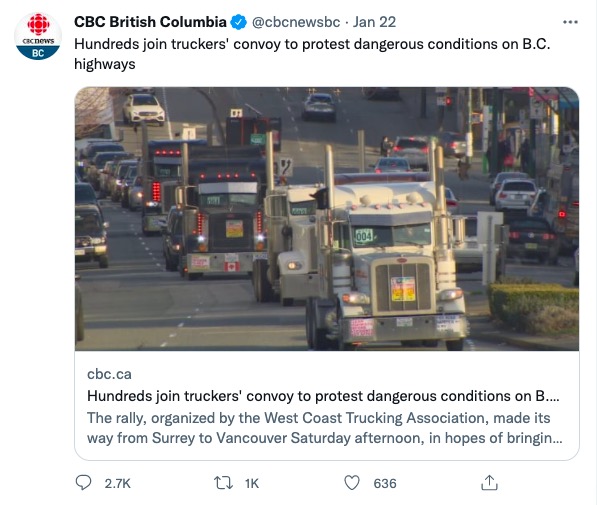 That didn’t work, so the Canadian media which has heavy government funding is taking a new tactic — vilifying the truckers with the usual baseless slurs from leftists — far-right, racists, sexists, and akin to the January 6 rioters who just want violence. It got very nasty with the hashtag “FluTruxKlan” trending that dehumanized truckers as “dirty”, “vermin”, “plague rats”, “white trash”, and “domestic terrorists.”

But truckers and their supporters don’t seem to care. If reports are correct, this truck convey could be the longest one ever recorded.

According to Guinness World Records, the longest truck convoy ever recorded was 7.5 km long, in Egypt in 2020.

The Freedom Convoy heading from British Columbia to Ottawa is said to be considerably longer.

“It’s 70 km long,” said Benjamin Dichter, spokesman for the Freedom Convoy 2022. “I have seen footage from an airplane. It’s impressive.”

By Wednesday, truckers hope to have taken their protest through to Manitoba and will make it to southern Ontario on Friday.

Plans call for the convoy to arrive in Ottawa on Saturday for a protest.

If it gets there on time — and if the convoy holds together as it has in British Columbia, Alberta and Saskatchewan — it could be 10 times larger than the world record.

“The largest parade of trucks consisted of 480 trucks and is achieved by Tahya Misr Fund (Egypt), in Cairo, Egypt, on 20 November 2020,” Guinness says on its website. “With a length of 7.5 km, Tahya Misr Fund was able to organize a parade of 480 trucks, amid the harsh weather and heavy rain, breaking the Guinness World Records title for the largest parade of trucks, which was achieved 16 years ago in the Netherlands with a parade size of 416 trucks.”

There are estimates the Canadian convoy could comprise 50,000 trucks from the West, East, and even from the United States. It’s difficult to speculate what will transpire in the days ahead.
Source: Toronto Sun

It’s not just one convoy, either. There’s one coming from the West coast of Canada, another from the East coast, and… American truckers from New England are joining the protest.

Hockey legend Theo Fleury has consistently been against much of the Trudeau government’s response to COVID and appeared on Laura Ingrahm’s show recently to talk about the truck protest.

“In Canada we have one of the biggest revolutions happening. Right now there’s 50,000 truckers and 1.4M people headed to the parliament in Ottawa. And they’re going to stay there until Trudeau resigns, or they give us back all of our freedoms and rights.” ?? @TheoFleury14 pic.twitter.com/VybSq0PAT2

Trudeau has dismissed the protest as a “small, fringe minority” who hold “unacceptable views.”

Prime Minister Trudeau says the “small, fringe minority” on their way to Ottawa “hold unacceptable views” and are undermining the rights, freedoms and values of Canada.

Let’s not forget that this a-hole has stood on the same side as terrorists and handed $10.5 million and apologized to Omar Khadr, the 15-year old radicalized Muslim who was held at Gitmo for killing a U.S. medic in Afghanistan because “a Canadian is a Canadian is a Canadian” according to Trudeau. Unless you didn’t get the vaccine, then you’re an extremist, anti-science, racist, sexist that shouldn’t be tolerated in Canadian society. And even worse than that — you might not have voted for Trudeau who managed to cling to power with just 32% of the vote. That’s democracy in Canada with a multi-party system.

It’s not truckers, or people demonstrating in name of Canada’s Charter of Rights and Freedoms in the convoy or supporting from home, who are fringe or unacceptable. No one should accept any scolding from any person who defends honour killers or mass bombers. #FreedomConvoy2022

Reports of exactly how long the convoy is varied wildly. Ontario Provincial Police say that approximately 400 trucks crossed from Manitoba into Ontario, while organizers insist that the convoy is much, much longer. Unconfirmed reports on social media claim that a 6 pm update from the convoy on Wednesday stated that the front end crossed into the province of Ontario from Manitoba at around the same time the back end entered Manitoba from Alberta — that’s over 300 miles.

Whatever the number, it’s still pretty huge if you look at footage shown on social media.

This does not look like a “small fringe minority” to me. Just sayin. ? #TruckerConvoy2022 #TruckersForFreedom2022 ?? pic.twitter.com/KHaMrCKCLl

Looking forward to to seeing the look on @JustinTrudeau’s face when this “small, fringe minority” arrive at his front door. #TruckersForFreedom2022 #TruckerConvoy2022 pic.twitter.com/KLsmrOYTjQ

What’s happening in Canada is amazing. Truckers are driving across the country in a massive caravan and freedom loving people are meeting them along the way to cheer them on. This is the type of protest that can be VERY effective. pic.twitter.com/0VqDVdjh9S

Current scene in Winnipeg: Traffic comes to a halt after the nationwide convoy of truckers protesting government’s vaccine mandates arrive.#FreedomConvoy2022

Just days before the convoy is scheduled to arrive on Trudeau’s doorstep, the Prime Minister announced that he came into contact with someone who was COVID-positive and will be isolated for five days.

Last night, I learned that I have been exposed to COVID-19. My rapid test result was negative. I am following @OttawaHealth rules and isolating for five days. I feel fine and will be working from home. Stay safe, everyone – and please get vaccinated.

The announcement was made not long after the first few trucks started arriving in front of Parliament Hill.

FYI, the triple-vaxxed Prime Minister doesn’t actually have to isolate according to Ontario’s rules.

If you are asymptomatic, and in fact fully vaccinated, you do not need to self isolate under Ontario rules. So which part are you lying about, Justin? The exposure? Or your vaccination status?

As Kate, the website administrator for Small Dead Animals, wrote, “Justin Trudeau is triple vaccinated with a product so effective that he has mandated cross-border truckers to take it in order they not become infected and transmit the virus — while isolating at home because he’s afraid he has caught the virus and may transmit it to others.”

Gee, why would he be choosing to isolate when he doesn’t have to?

The protest is inspiring people around the world — the vaxxed and the unvaxxed — who oppose these heavy-handed government mandates.

“I never thought that I would say this but we need to take a cue from what is happening in Canada right now.”

A convoy of trucks is moving to protest the vaccine mandate for truckers in Canada. @stinchfield1776 introduces the truckers taking a stand for freedom. pic.twitter.com/s92aetEOT0