The former President has weighed in on the “Freedom Convoy” that arrived in Canada’s Capital on Saturday.

Thousands of truckers from all across Canada and some from the United States arrived in Ottawa, Ontario on Saturday to protest vaccine mandates and demand the end of all pandemic measures. Truckers and fed-up Canadians want the Prime Minister of Canada to follow the lead of Prime Minister Boris Johnson who announced the beginning of the end to all COVID measures in the U.K. a few weeks ago.

According to Our World In Data, Canada has the seventh-highest COVID vaccination rate in the world with almost 86% of the entire population jabbed.

Still, the Canadian government wants to force everyone to get vaccinated despite the clear data that shows that the vaccines don’t prevent contracting or spreading the virus, even though that’s what we were told by the media and the public health officials.

With the Omicron variant spreading to the vaxxed and unvaxxed, some medical experts are calling for an end to the mandates and saying that we need to learn to live with the virus and focus on protecting the most vulnerable.

Despite that, the Canadian Prime Minister is determined that no one in Canada should be unvaccinated.

A few days before the convoy was scheduled to roll into Ottawa, PM Justin Trudeau called the truckers involved a “small fringe” who hold “unacceptable views.”

On the eve of the convoy arriving on Parliament Hill, Trudeau suddenly announced that he had come into contact with someone infected with COVID, so, despite a negative COVID test, the Prime Minister decided to isolate for five days. How convenient.

Several conservative politicians showed up in the blistering cold to support the truckers and their protest, but truckers also received a ringing endorsement from south of the 49th parallel.

Former President Donald J. Trump told a rally in Conroe, Texas that he stood behind the “Freedom Convoy” for resisting COVID-19 mandates and defending freedom.

“It’s true, the Canadian truckers — you’ve been reading about it — who are resisting bravely these lawless mandates and are doing more to defend American freedom than our own leaders by far. And we want those great Canadian truckers to know that we are with them all the way. They’ve really shown something,” Trump said to a cheering crowd.

This comes on the heels of Don Jr.’s video about it.

They aren’t the only ones who have weighed in — other celebs have shown their support for truckers.

Elon Musk has tweeted about it.

Joe Rogan covered it on his podcast.

“It’s a giant convoy of trucks . Some insane amount of people..like 50 thousand”

Russell Brand has spoken about it on his show.

Comedian Rob Schneider has shown his support along with his disdain of Trudeau on Twitter.

Trudeau may have to redefine what a “small fringe minority” is…
It’s stretching from Manitoba to Ontario!
#TruckersForFreedom2022 pic.twitter.com/n90afOqUOU

Canada… you guys really surprised me this time. (In the best way possible).
The entire world is watching, and with you. ??#TruckersForFreedom2022 https://t.co/BMBIuX4zOu

Prominent Canadians have also shown support for the truckers.

The truckers I’ve met today have been peaceful, kind and patriotic.

I’ve not seen anyone dressed up in blackface or other racist costumes. #TruckersNotTrudeau pic.twitter.com/elHp2hlOYc

This is just another peaceful rally like dozens of others I have attended in the past two years, with patriotic Canadians braving the bitter cold. Not a violent insurrection. #TruckersForFreedom
pic.twitter.com/4gs0cOb85R

We asked PPC leader Maxime Bernier for his thoughts on Trudeau’s reaction to the Freedom Convoy.

Which Canadian is more prominent right now than Dr. Jordan B. Peterson?

Every word he says he is a lie. A nose as long as the trucker’s convoy.

Actress Evangeline Lilly posted on Instagram that she stands with the truckers in opposing vaccine mandates. 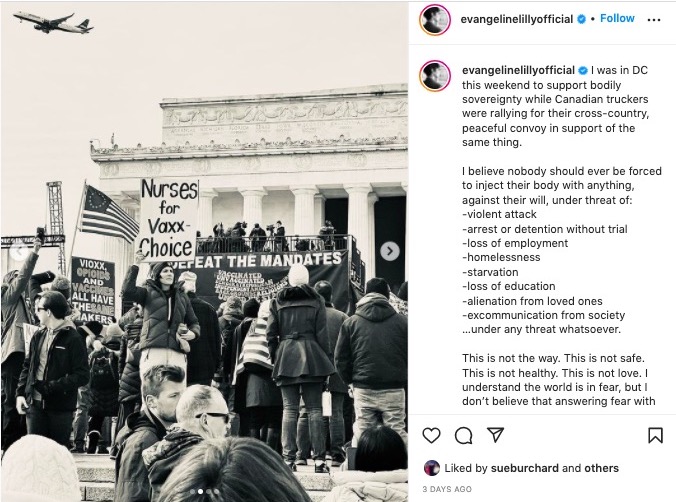 And, of course, you can’t have a Canadian protest without hockey players weighing in.

Wow, thank you Mike Fisher for your support and kind words for our truckers. Go #Canada #convoytoottawa2022 #ConvoyForFreedom pic.twitter.com/uKyps4j8In

Hockey legend Theo Fleury was on The Ingraham Angle talking about the convoy.

Canadian hockey legend and Olympic gold medalist @TheoFleury14 spoke in support of the Truckers for Freedom Convoy on Fox News’s The Ingraham Angle on Wednesday.

Other right-of-center outlets around the world are covering the convoy.

Greg Gutfeld covered the trucker protest on his show on Friday night.

Mark Steyn: The Canadian anti-mandate truck convoy is the most inspiring story around the world at the moment.

GB News host Neil Oliver spoke about it in his amazing monologue, and it was shared by actor Laurence Fox.

Beautiful and hopeful words from @thecoastguy as always. Our world is worth fighting for. #TruckersForFreedom2022 pic.twitter.com/zYXfNm2vdm

Rebel News has had extensive coverage of the convoy and founder Ezra Levant addressed the crowd in Ottawa on Saturday.

I was invited by the truckers to give a short speech. Here’s what I said: pic.twitter.com/ZYclZwDBtH

There’s a revolution happening right now in Canada that has sent their tyrannical PM into hiding.

Reports that truckers in Italy, Australia, Brazil, and all over Europe are following the lead set by Canadian truckers.

Stand #together everyone we will win this No Mandate No Vac Passport #freedomconvoy22 #freedomconvoy #TruckersForFreedom #TruckerConvoy2022 pic.twitter.com/y91zmeFVyy

The truckers have committed to staying in Ottawa until all COVID mandates are lifted.

From the crowd gathered in support, it looks like they’re quite welcome.

the revolution will not be televised

Keep it up, truckers!

Keep on Truckin’ In The Free World.