Oh, Biden’s worried about that ‘minor incursion’ from Russia, is he? (Or is it the ‘sacking of Kiev’? It all changes so quickly.) Exactly when did Joe start caring about sovereign borders?

Does the Constitution clearly spell out American politicians’ responsibilities as they relate to preserving the borders of another country? I don’t remember a text that says that, even if DC is whipped up into a frenzy of attention looking at that Russian border, while Joe openly appeals to his buddy Xi to talk Putin down from possible war footing.

But a plain reading of the Constitution does lay out something that IS their responsibility, plain as day, right there in black and white.

Shall guarantee to every state a Republican Form of Government and shall protect each of them against Invasion; and on Application of the Legislature,or of the Executive (when the Legislature cannot be convened) against domestic Violence.

Sure, we added the bold print, but that sentiment seems pretty clear, doesn’t it?

You’d think it was so clear that even a politician could understand it. But, it seems they need reminding. And not just the Biden administration, either.

Allen West does not think the current governor has been using all the tools at his disposal to protect Texas’s sovereignty, either. 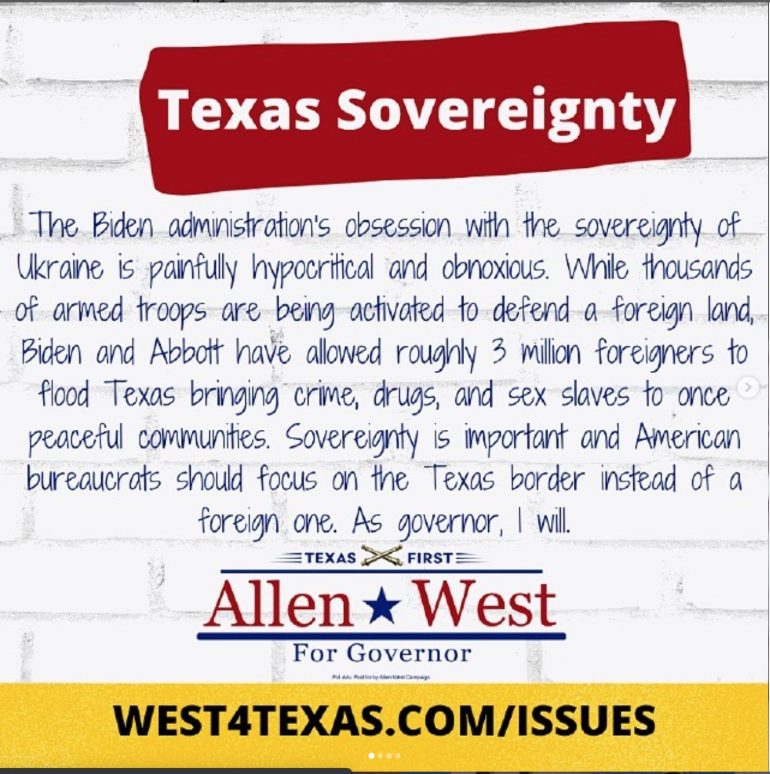 ‘The Biden administration’s obsession with the sovereignty of Ukraine is painfully hypocritical and obnoxious. While thousands of armed troops are being activated to defend a foreign land, Biden and Abbott have allowed roughly 3 million foreigners to flood Texas bringing crime, drugs, and sex slaves to once peaceful communities. Sovereignty is important and American bureaucrats should focus on the Texas border instead of a foreign one. As governor, I will.

West has even gone into specific details about what he would do to achieve that goal that Abbot hasn’t.