Biden’s Press Sec crowed about the amazing relief effort, how unprecedented and massive it was, how many people it flew out of Kabul’s airport, and that hardly any Americans were left behind. When pressed, she floated a number around 100 persons, while making very strong inferences that any Americans remaining behind in a Taliban-controlled Afghanistan did so by making a conscious choice to remain behind.

Let’s quickly recall just what a chaotic mess those final days in Kabul were, and how proud Biden’s administration were of their grand achievements before we burn those ‘grand achievements’ to the ground with facts released in the Senate investigation that followed.

What’s the too-long didn’t read version for anyone in a hurry?

President Joe Biden abandoned as many as 9,000 American citizens in Afghanistan following the administration’s botched withdrawal in August last year, a new report released on Thursday by the Senate Foreign Relations Committee revealed. The report contradicts the Biden administration’s earlier claims that just 100-150 were left behind.

Signed by Foreign Relations ranking member Jim Risch of Idaho, the report shows that senior State Department officials leading the evacuation task force believed 15,000 Americans at the most were in Afghanistan around Aug. 17. By Aug. 31, the final day of evacuation operations, 6,000 Americans managed to escape the country that was quickly taken over by the Taliban.– American Military News

For everyone else, there’s a lot to cover about just how bad — and how culpable — Biden and Co really are for the preventable FUBAR situation that unfolded in August and September.

Chaos And The Fall Of Kabul

One brave whistleblower was fired for calling Biden’s Surrender of Afghanistan a colossal failure and asking why none of the brass resigned rather than carry out an order that left Americans behind. Sheller was right.

It should go without saying that Marine Lt. Col. Stuart Scheller deserves an apology for being thrown into solitary confinement in the brig over posting a video criticizing the cluster**** of a withdrawal in Afghanistan that led DIRECTLY to the deaths of not only the 13 servicemen and women who died in the suicide attack and the scores of civilians also killed and injured but also the ‘righteous strike’ in which Biden’s drone fired in retribution, killing an Afghani aid worker and some children.

But the one man telling the truth about Biden and Milley’s failures deserves to be reinstated and should be granted back-pay for the time he lost, and compensation for the public defaming he got while dishonorable scoundrels like McCabe are awarded lucrative golden handshakes at taxpayer expense. Biden’s Unjust Administration: McCabe vs. Scheller … A Tale Of Two Firings

General Milley called the Afghanistan surrender a ‘success’. Gen. Milley Thinks The Afghanistan Pullout Was Well Executed … Do You?

Biden and his generals more or less dropped the blame at one another’s feet. HEY DEMS: Who’s Lying About Afghanistan SNAFUs … Joe Biden Or The Generals? (VIDEO)

More than a month later, despite non-profit groups working to airlift Americans out to safe neutral countries, having discreetly moved untold hundreds of people to safety, the Biden administration was still giving us lowball numbers of how many were now trapped under Taliban rule.

To make matters worse, Axios just uncovered damning emails of the absolute incompetence of orchestrating last-minute evac planning less than a day before Kabul fell to the Taliban.

What are the REAL numbers behind Americans trapped in Afghanistan?

Since the Biden administration decision-makers had entered full Cover-Your-A$$ mode, the Senate did some oversight of its own. What they found was not good.

Here’s the summary of the US Senate Committee On Foreign Relations report.

Key findings of the report include:

The Biden Administration did not hold a senior-level interagency meeting to discuss an evacuation or formally task the State Department (State) to contact at risk populations, including Americans, until August 14, just hours before Kabul fell.

Failed to do any contingency planning for worst-case scenarios.
Ignored intelligence reports about the risk of an imminent Taliban takeover of Afghanistan.
Disregarded dissent cables from Foreign Service Officers on the front lines.
Abandoned Bagram Air Base based on arbitrary troop caps and political considerations, hampering the evacuations and the reinserted troops.
Failed to take significant steps to improve the Special Immigrant Visa (SIV) program despite clear evidence that the program was flawed.
The Biden Administration failed to protect:

The full 65-page source document can be found here.

Even the table of contents for that source document tells quite a damning story.

Some screenshots from that report: 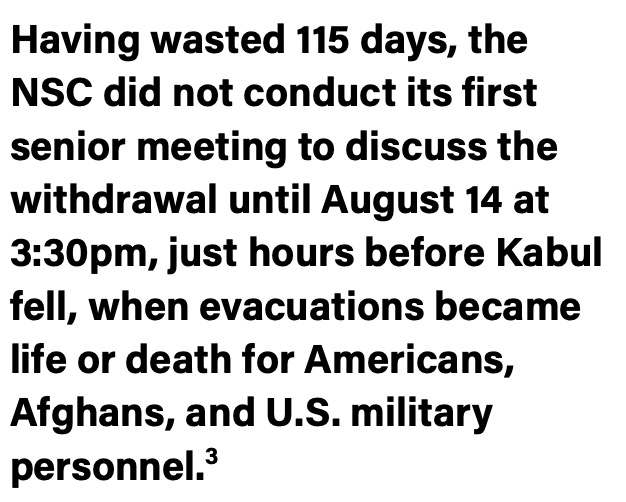 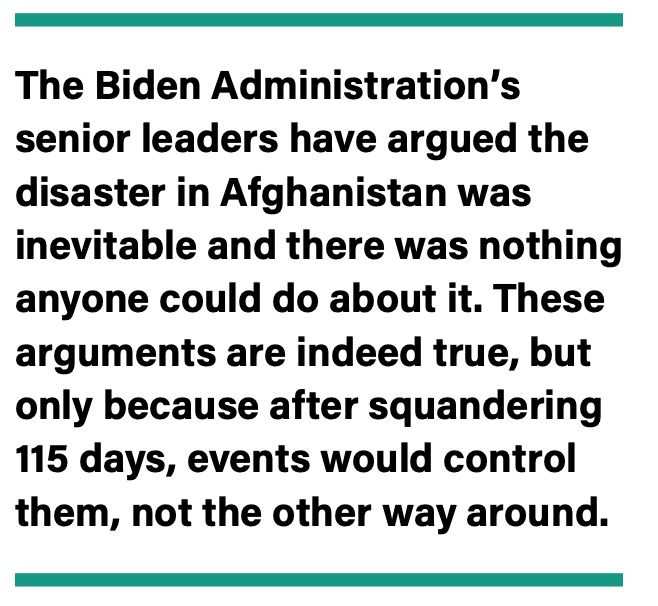 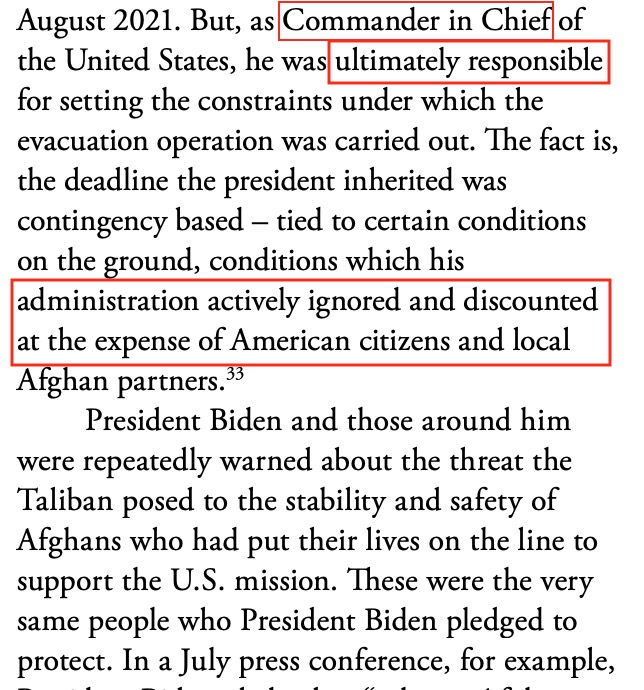 There’s a LOT of highlighting on this one, maybe too much, but we didn’t want our readers to overlook any of the many important parts of that small snippet. 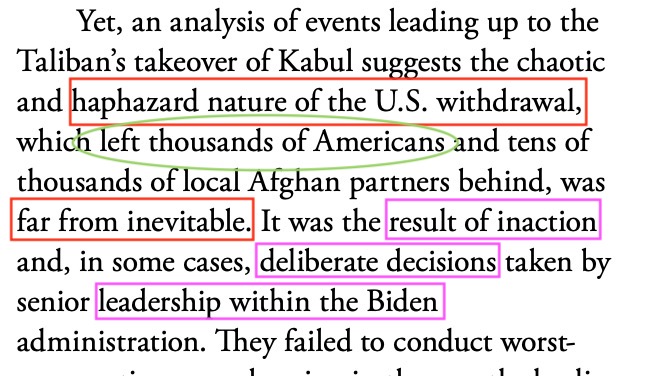 This paragraph points to the Biden administration’s direct causal role in the Fall of Afghanistan to the Taliban. 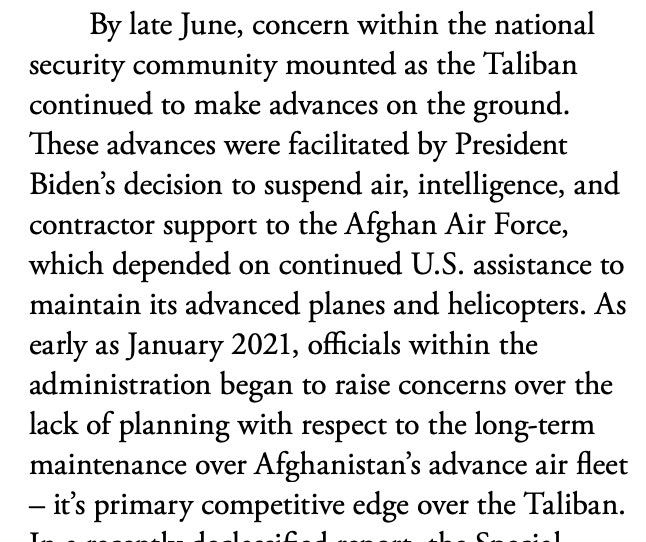 The ‘Original Sin Of the Investigation’ — Abandoning Bagram 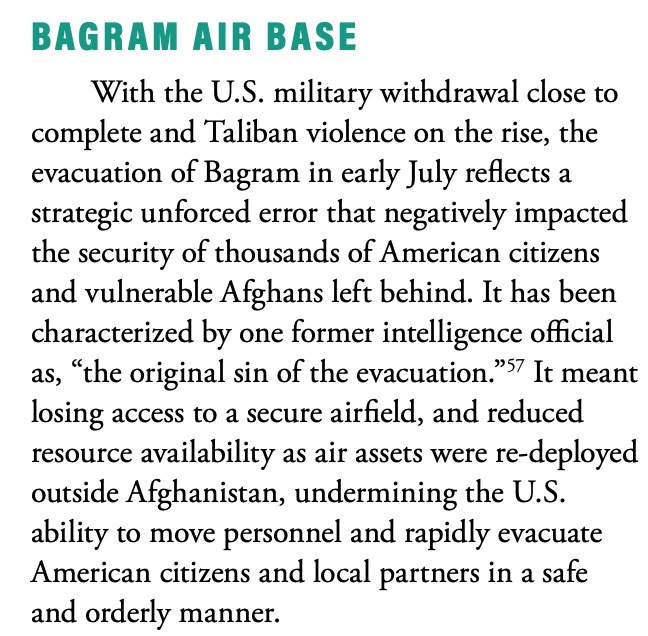 The decision to abandon Bagram was Biden’s and done against the recommendations of his advisors, including Jake Sullivan. 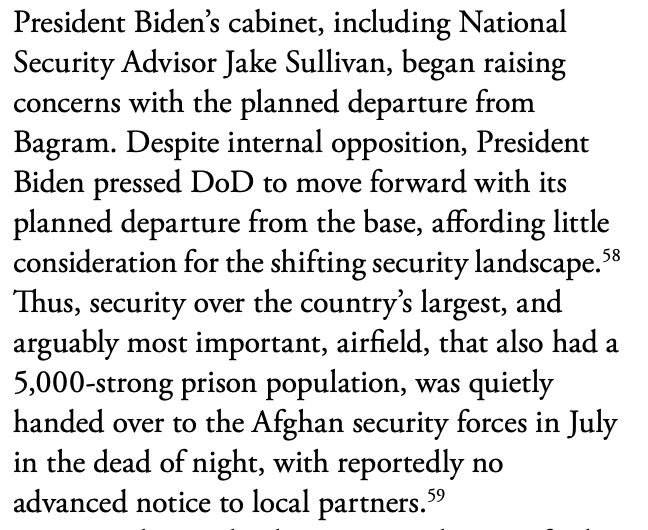 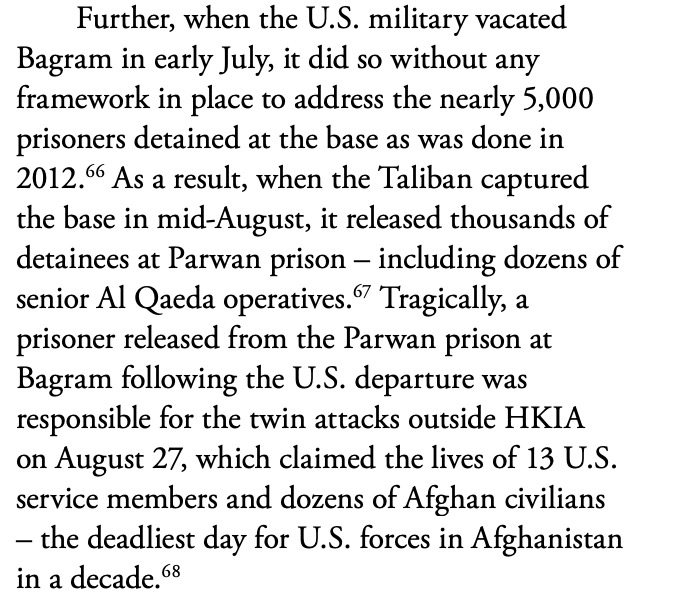 Biden’s fingerprints are all over the evacuation failures, too. 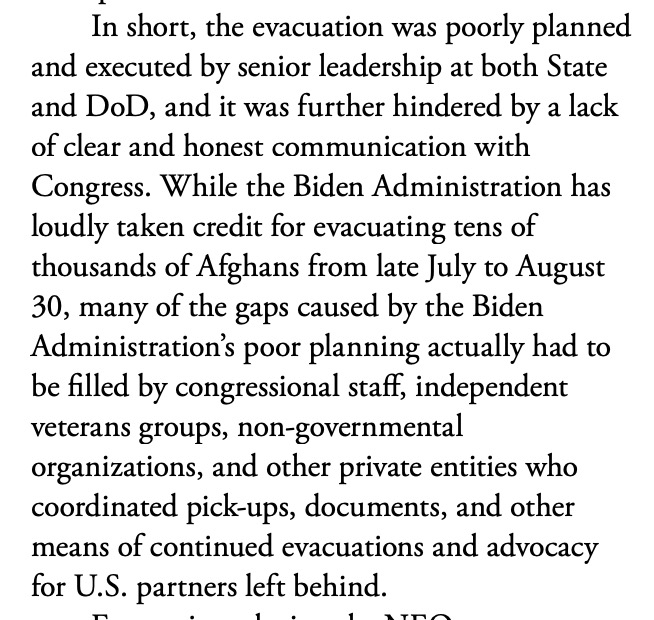 Remember when Biden tried to accuse Trump of undermining NATO? 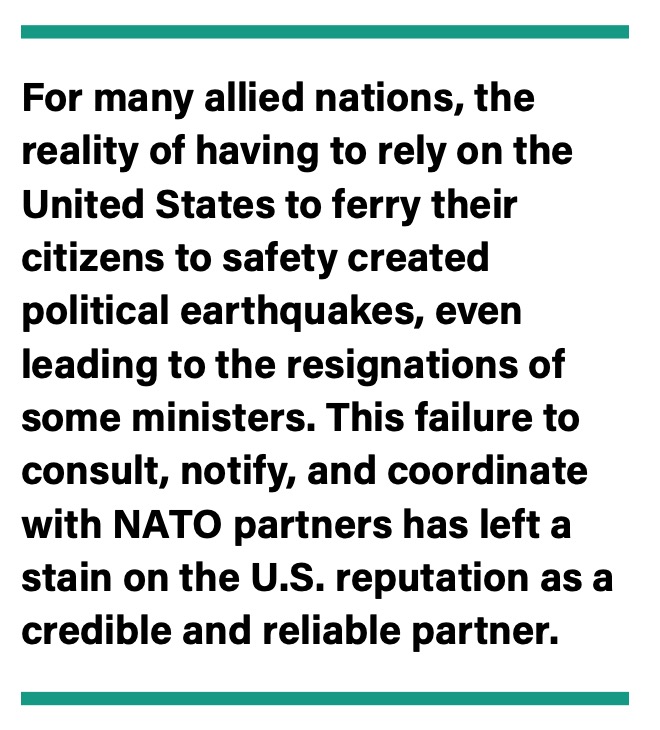 PROMISES KEPT & BROKEN: Biden Kept His Promises … Just Not The Ones He Made To Americans