This just goes to show you that it isn’t just the United States media that has an overt left-wing agenda.

The Canadian Broadcasting Corporation (CBC) has decided to post an article that suggests that “freedom” is a malleable term that the “far-right” uses to fight against freedoms for others.

It’s a batcrap crazy take, but welcome to the insanity of the CBC. Honestly, if it wasn’t given a bajillion dollars a year from the government, it would be but a distant memory in 2022.

Still, these commie-sympathizers decided to run it. 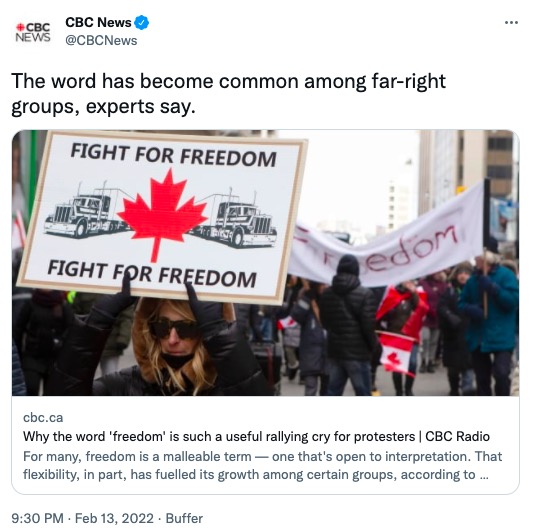 Yikes! With this take on freedom, does CBC actually stand for the “Communist Broadcasting Corporation”?

Of course, the CBC thinks that anyone to the right of Karl Marx is a “far-right extremist.”

It’s not even worth clicking on the link, honestly. It’s precisely what you’d expect — people who want freedom on the right are actually trying to impose restrictions on other people somehow.

The article says that freedom is a “flexible” term that can mean a lot of different things.

And, of course, there’s a reference to January 6 — the riot that is a perpetual gift to the leftwing zealots all over the world.

That flexibility, in part, has fuelled its growth among certain groups, said Barbara Perry, director of the Centre on Hate, Bias and Extremism at the Oshawa-based Ontario Tech University.

“It is a term that has resonated…. You can define it and understand it and sort of manipulate it in a way that makes sense to you and is useful to you, depending on your perspective,” she told Cross Country Checkup.

As seen among some protesters currently opposing vaccine mandates and other public health measures, freedom signals a desire for freedom from government intervention or overreach, Perry noted.

So, who are these “experts” that the CBC is relying on? Quillette editor Jonathan Kay explains that these are grievance hustlers who make a name (and career) for themselves by pushing unsubstantiated rumors suggesting that neo-Nazis are prowling around all over Canada.

There’s Bernie Farber who was caught by Kay using a photo of an anti-semitic flyer from Miami a few weeks ago to smear the Freedom Convoy in Ottawa.

Wow Bernie, isn't it incredible that the picture your "friend in Ottawa at the Occupation" sent you is identical to the photo posted on Twitter two weeks ago by someone in Miami, right down to the ceramic design in the background? https://t.co/s4Xf3IbFrI pic.twitter.com/OJGEgrariZ

And Barbara Perry who is quoted above has a list of 300 neo-Nazi groups in Canada that she won’t release for reasons unknown. You’d think that if the rise of this sort of racism in Canada was a growing threat, she’d put out the list.

OMG … the expert is Barbara Perry of @BernieFarber's CAHN! She's the one with the list of 300 far-right hate groups she refuses to show anyone. I wrote about her shtick back in 2021. Great to see she's still at it. https://t.co/ueqN6GHrPR

So, to sum up, the CBC has listed two experts both from the same organization whose leader has pushed a hate hoax against the truckers. It also included a comment from Elisabeth Anker, who wrote a book titled, “Ugly Freedom” and recently had an op-ed in the New York Times that shows that she’s a leftist that wants to use the call for freedom as a cudgel.

It turns out that the Canadian Anti-Hate Network got some cash from Prime Minister Trudeau. Of course, they do.

Wait a second. Now I'm really confused. It says you're the chair of @antihateca … Didnt you guys get $250K from the Liberals last year because of all your super expertise in anti-hate-ology? Please don't tell me you're getting your anti-hate news tips from Del Boca Vista… pic.twitter.com/iEcCfgzPOp

The CBC is getting lambasted by Canadians.

The most prominent Canadian has weighed in…

Could this possibly be any more asinine? Disappear @CBCNews you are far worse than a mere anachronism. https://t.co/yfbUYJ9PU7

The Premier of Alberta has blasted them for it.

With articles like this, the CBC is becoming a parody of itself.

And we have to pay for it with our tax dollars. https://t.co/xPfzDvxgo1

Other Canadian politicians have also schooled the CBC on what freedom means.

The CBC gets well over a billion $ from Canadian taxpayers a year. Some would call that freedom itself. Pitting the Canadian flag and now the word freedom itself against Canadians is a new low. It is a hallmark of this country – left, right, centre! #cdnpoli https://t.co/LaYY3WZDFb

Appeals to freedom are rooted in a widely-shared liberal natural rights tradition which has always been part of our constitutional order. The application of freedom is legitimately contestable, but there is nothing “far right” about it.

Canadian reporters are also slapping the CBC around for this nonsense.

Actual quote in the piece. "Freedom is a slippery concept". ? https://t.co/zdW1Ah9LdK

This is so embarrassing. https://t.co/M5X0K1mZkx

You can't make this shit up https://t.co/YSuYROSgKl

They are talking about freedom. Only Communists would call freedom "far-right." pic.twitter.com/or7EGVmNm7

Regime journalists take a stand against the peril presented by freedom https://t.co/DgCU1B5ZRk

For years the Conservatives in Canada have been calling for the defunding of the CBC. Now you know why.