What makes an army of live-streamers different from official media sources?

Evan Solomon is an Ottawa-based journo who works the political beat.

Let’s introduce ClashDaily readers to this Trudeau simp before we show you the exclusive video we caught shortly before the horses trampled people in Ottawa.

Here’s a glimpse at Evan Solomon mocking a former Conservative leader calling him on his inflammatory choice of language. 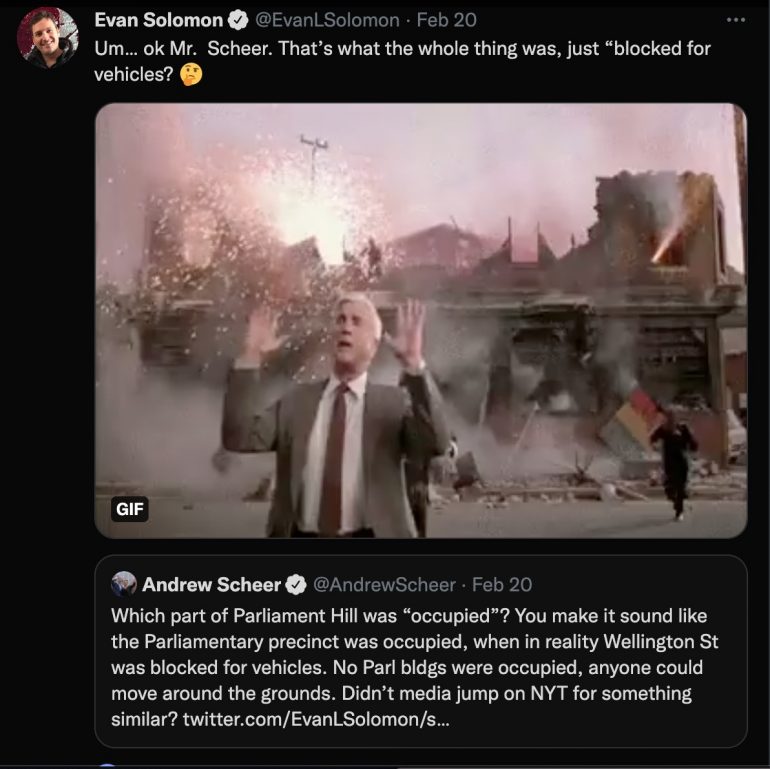 Funny enough, yours truly spotted him not far from the police lines shortly before the elderly woman in the walker got trampled by the RCMP horses.

There was a story unfolding just three feet away from him, which he stoically ignored as he stood there, sporting a 1000 yard stare with his back to the police line.

He may not have even noticed the little people. Have you noticed how often, self-described elites pay no notice so-called little people? How else would you explain the collective indifference of the collab-by-Zoom people to the catastrophic impact of COVID shutdowns on working stiffs?

Here’s the clip shot by a simple passerby who, judging by the pathos in her voice, thought this woman might have a story worth sharing.

Turns out, she did.

Note: their cameras seemed to take no notice of her. pic.twitter.com/aaPnRD0S27

The news scribblers have been working really hard to portray anyone in the protest as ‘white nationalists’ or ‘nazis’ or … whatever other slander they can come up with.

Unfortunately for the news crews, this woman doesn’t fit into any of those categories. Her grandmother suffered at the hands of Hitler. She has every bit as much right to speak about ‘Blackface Hitler’ as anybody else.

But official news sources in Canada who tend to be on the receiving end of government largesse — with the exception of Rebel News or independent yobs like yours truly — don’t really even see her as a person, let alone a story worth sharing.

They still wonder why so much of the public neither trusts nor respects them.

Gee, do you think maybe taking sides and labeling it an ‘occupation’ might have had something to do those ‘trust issues’, Evan?

If you don’t like being called ‘fake news’, there’s a simple solution. Drop the bias and stick to the facts. Or are you so thoroughly ensconced in your bubble that you don’t even recognize the world beyond the monoculture of the political beat?