The same talking heads wringing their hands over the dangers of white supremacists plotting to overthrow our government keep excusing people who actually embrace criminal behavior.

And those people embracing criminal behavior never seem to be the same people that Merrick Garland have solemnly assured us are the real problem facing America.

We have a completely unchecked Southern border, Criminal Cartels are entrenching their holds across the country. Murder rates are skyrocketing in major cities around the country. Human trafficking is spiking. Fentanyl poisoning is fast becoming one of the top killers of young Americans… and AG MG thinks the real threat is some guy in a MAGA hat who doesn’t trust the government.

For the record, Merrick, it’s people like you who are undermining that trust in the government. Your people are throwing unconvicted Americans into solitary confinement over allegations of what, ‘Parading’, while you are reducing the sentence of a BLM rioter who deliberately set a fire that sent an innocent bystander to a firey death… because you liked the cause he supported.

We noticed that the DOJ did not use the same strong language to denounce the apparent racial motivations of either the Waukesha Christmas Parade killer, nor of the jihadi sympathizer that took hostages in a synogogue.

BLM is not the ‘benign’ or ‘human rights’ group it’s been sold to the public as being. It’s not just because their organization was founded by ‘trained Marxists’ who enjoyed having their writings compared to those of a Chinese communist dictator whose revolution is estimated by some to have killed some 65 Million Chinese people. By comparison, the total deaths attributed directly to the fighting in WWII — on both sides — is estimated to be in the range of 50-70 million souls.

If you’re an activist from the left, even a violent one, you are celebrated. You might even get to have a future Veep raise bail money for you.

But maybe we’re being unfair in our criticism. Let’s look at another celebrated political activist.

Quintez Brown was a BLM activist and an advocate of gun control laws. A big fan of David Hogg.

Here he is as a featured guest of Joy Reid, being used as a cudgel against, predictably, conserative politicians. 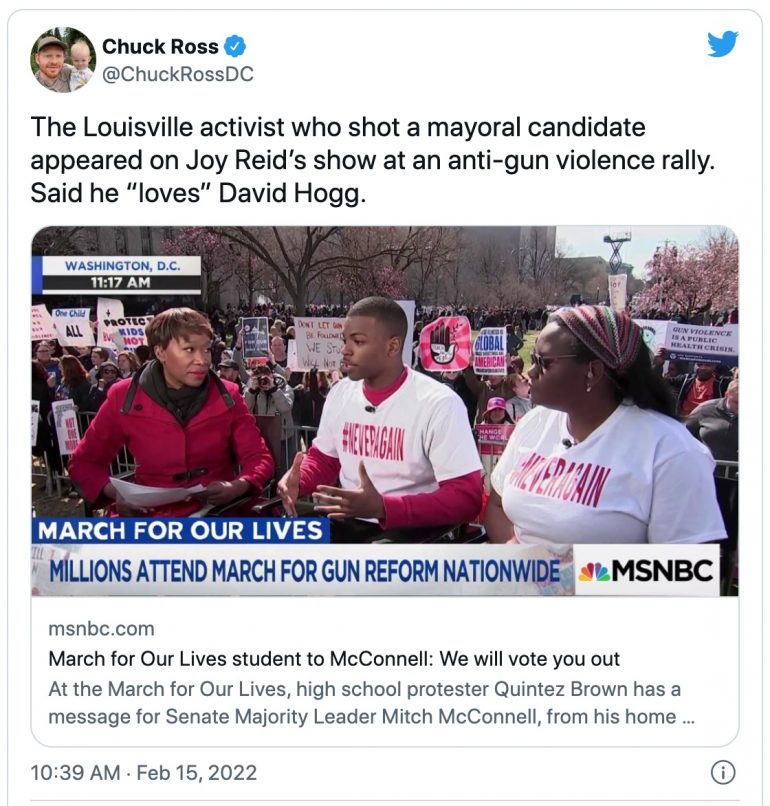 Unfortunately for Democrats, this means there is no way of distancing themselves from the politics of this guy whose cards have long since been laid on the table.

The echo chamber on the left has been stoking and whipping up racial grievances for years now. And they have been excusing and downplaying violence as justifiable in one sense or another… ranging from looting and theft, to arson resulting in an innocent man being burned alive.

Should it really surprise anyone that perpetual demonizing of non-black races and a justification of violence (remember how the media excused ‘antifascist Antifa’ for years?) could have some second-order consequences?

Brown previously worked for the Louisville Courier Journal as an intern and an editorial columnist, according to the newspaper. In December, Brown shared a short campaign video on Twitter announcing that he was running to represent District 5 for Louisville’s Metro Council in 2022. His writing advocates for the ideals of communism, socialism, liberation and has criticized “gun-loving” Republicans.

…Police said an article of clothing Greenberg was wearing was struck, and the candidate said his sweater was grazed by a bullet. Greenberg said the suspect had walked into the campaign office, pulled out a gun, “aimed directly at me and began shooting.”

…In his Twitter bio, he says, “We have one scientific and correct solution, Pan-Africanism: the total liberation and unification of Africa under scientific socialism.”

What Dems should take particular note of is the victim in this attempted assassination. Their over-heated rhetoric isn’t just endangering the ‘other team’, it’s boomeranging. He took aim, not at someone who the left might characterize as an ‘evil’ or ‘disposable’ Republican candidate, but one of their own … a Democrat.

To receap, this Democrat is a BLM supporter. A race essentialist. A communist. And a domestic terrorist who ‘undermined democracy’ to the point of attempting to assissinate a Jewish candidate.

What happens if the two toxic ideas of justified violence and racial grievance get thrown in an ideological blender? They come out as the justification of racial violence.

We saw it with the mass murder of Dallas cops during Obama’s presidency.

We saw it in Waukesha.

And we’re still seeing it now.