On Sunday, it was announced that Her Royal Highness Queen Elizabeth II has tested positive for the China Virus.

There have been concerns about what would happen if the Queen contracted COVID because, at 95, she’s very firmly in the highest risk category even though she’s triple-vaxxed.

There was quite a bit of concern for her health when she was hospitalized in October for “preliminary investigations” and was told to rest for a few days.

Buckingham Palace issued a statement on Sunday that the Queen tested positive for COVID and is experiencing “mild cold-like symptoms” and will be carrying on with “light duties.”

THE QUEEN, who is triple vaccinated, has tested positive for Covid after suffering from mild cold-like symptoms, palace officials say.

Her Majesty is expected to hold a telephone audience with the Prime Minister and conduct virtual audiences this week as she carries on with light duties despite catching Covid.

The 95-year-old monarch, who is experiencing mild cold-like symptoms, is self-isolating at Windsor Castle, where a number of her team have also been hit by the virus.

The news comes after the Queen had come into direct contact with Prince Charles during the same week he tested positive for the virus.
Source: The Sun UK

This news made a particular splash in Commonwealth countries. A brief segment on “A Current Affair” on Australia’s 9News was particularly interesting.

Dr. Mukesh Haikerwal said that the Queen might benefit from medication that was recently approved in Australia to treat the virus that originated in Wuhan.

Check out what that medication is…

Wait… isn’t that the same stuff that they blasted Joe Rogan for taking? 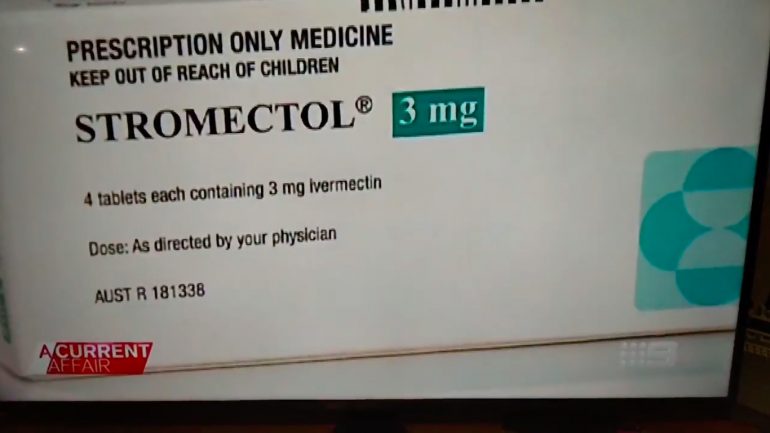 According to Drugs.com, “Ivermectin is a generic medication made by several different manufacturers. It also comes under the brand name Stromectol, which is made by Merck Sharp & Dohme Co.”

So is Dr. Haikerwal suggesting that the Queen of England take horse dewormer?

We know that the Queen is a big fan of horses, but that’s going a bit far, isn’t it?

Besides, Ivermectin has been used on humans for a number of years and the multi-faceted drug won the Nobel Prize in 2015 and was called a “miracle drug” on par with penicillin and aspirin.

That would be the same medication that Merck issued a statement on its website that says not to use to treat COVID because it’s not patented and they’ve developed a brand new medication that they hold the patent for.

Ivermectin is a generic drug, and Big Pharma doesn’t make much money selling it, so they have to create new drugs to sell those for this global pandemic.

Even Pfizer is getting in on the act with a knock-off version of Ivermectin that they can charge the big bucks for.

Meanwhile, as the Corporate Media slams the use of the “horse dewormer” Ivermectin to treat COVID, doctors around the world are using it on patients with success.

It is positively shameful that there has been a singular focus on vaccines instead of treatment all so Big Pharma can get a massive payday.

Pfizer alone has made over $37 billion in 2021, and it’s still not good enough for them. They want to make more on boosters and the treatments.

Why the hell should we trust Pfizer when: (a) the company paid the largest criminal fine in history for illegally promoting drugs and paying kickbacks to healthcare providers to prescribe them, and (b) FOIA requests show that they were not reporting adverse reactions to the jabs?

I’m old enough to remember when people were skeptical of Big Pharma for causing things like the opioid crisis.

It’s too bad that the “medical experts” can’t seem to remember that.