Baby Cyrus may be back home with his parents, but the fight isn’t over yet.

Some of our readers will already be familiar with the story of baby Cyrus from our earlier reporting on his family’s ordeal, here: ‘Medical Kidnapping’ Of 10-Month Old Sparks Outrage And Protest

The abridged version is that mom and dad had been taking their 10-month-old son back and forth to the hospital for every test imaginable because he couldn’t properly digest protein, and has not been putting on weight as a child his age normally would. On the day one of his appointments had been scheduled, mom was feeling unwell in her stomach, so she called her pediatrician and said she would not be coming in that day.

Long story short, CPS was called, police came to her door, the child was taken from her, while mom and another woman wound up inexplicably arrested.

So began their family’s battle with those responsible for forcibly kidnapping her child under the cloak of child protection.

After a lot of prayer, pressure, protests and activism, baby Cyrus was returned to the family home, but the ordeal is by no means over. Officially, the infant is still a ward of the State, and they will have to fight in order to get their parental rights restored.

This event has shone a floodlight on a problem that is far bigger than most of us realize, one that is bigger than just baby Cyrus’s own personal ordeal.

The system itself is broken, and his family is determined to set it right.

There is a financial incentive to take children from the arms of their families. And Child Protective Services is part of a deeply corrupt system.

They have set up a website that keeps people apprised of all the details of their story, and the brief video that’s live at the moment (it will be archived soon, possibly under the title P.A.C.T rally info) explains exactly what the coming rally is about. (You can get the full story about their case and related information — past and upcoming — at that site.)

Their poster gives a pretty good summary of what the rally is all about. 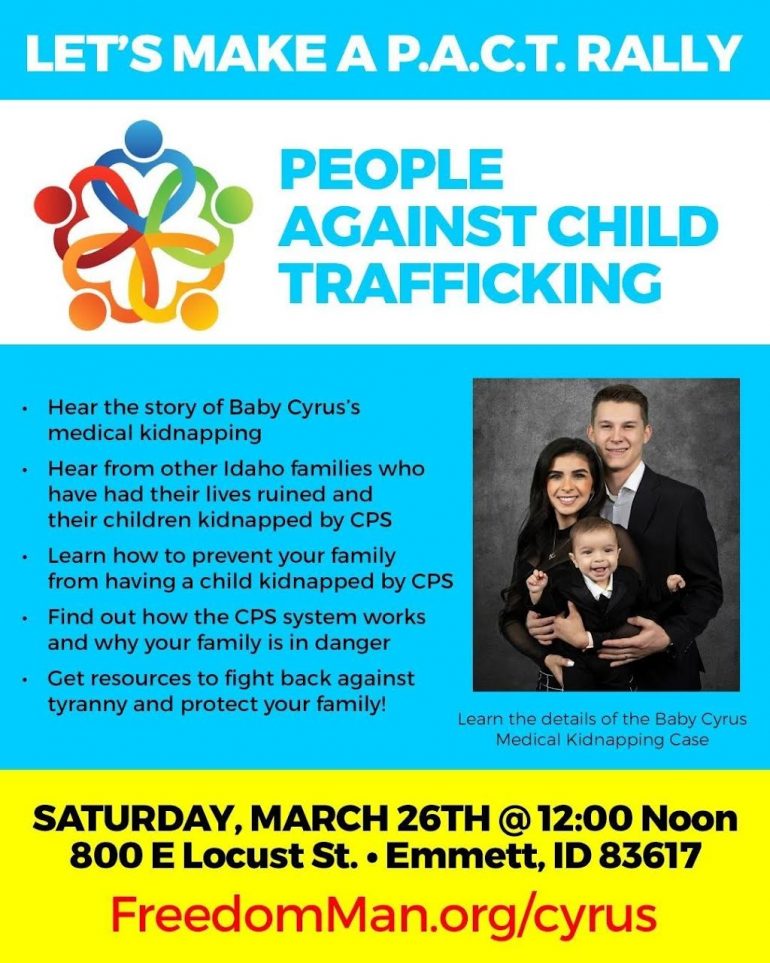 More details about the rally can be found here.