The President of Blackrock says that millennials “never had to sacrifice” and should brace themselves because they’re going to go to a store and “not be able to get what they want.”

Rob Kapito, President of the world’s largest asset manager, is warning a “very entitled generation” to brace for what he’s calling “scarcity inflation”

‘For the first time, this generation is going to go into a store and not be able to get what they want,’ BlackRock co-founder Rob Kapito said at an energy conference in Austin, Texas on Tuesday, according to Bloomberg.

‘And we have a very entitled generation that has never had to sacrifice,’ added the 65-year-old Kapito, who has an estimated net worth of more than $400 million and made $24.6 million in total compensation in 2020.

‘I would put on your seat belts because this is something that we haven’t seen,’ said Kapito, who blamed a shortage of workers, energy and agricultural supplies for soaring ‘scarcity inflation’.
Source: Daily Mail

Uh… yeah. We know about shortages. We’ve all been living it for the past couple of years with the pandemic, supply chain issues, and the Biden-Harris administration’s incompetence in dealing with those problems.

Pretty rich that the guy worth more than $400 million is warning an “entitled generation” that they’re going to need to brace themselves for higher prices and shortages.

It won’t really affect him, much, though, will it? He and his buddies will be just fine since BlackRock and other investment firms have recently decided to get into the real estate market and are actively killing the dreams of homeownership of many working-class Americans by driving prices higher.

Kinda gross that he’s warning about “scarcity inflation” when his company is contributing to it by buying up homes and forcing people to remain perpetual renters.

Last week, BlackRock CEO Larry Fink was making similar dire predictions about the future of the global economy — he says that Russia’s invasion of Ukraine “has put an end to the globalization we have experienced over the last three decades.”

These BlackRock guys seem to be pretty high on their own opinions.

Kinda reminds me of how Big Tech Billionaire/Largest Owner of Farmland in the U.S. wants everyone to change how they eat — you know, because of “climate change” while he grows even more wealthy.

While they’re trying to shape narratives (and behavior, apparently) those of us in the real world can see what is happening with our own eyes.

Since Biden took office, we have seen inflation and the gaslighting about the inflation — first, it didn’t exist, then you shouldn’t worry about it since it was only affecting the wealthy, but that thing that doesn’t exist that only rich people need to worry about is just “transitory”, and now it’s actually a good thing.

The current administration thinks you’re stupid. But we already knew that. 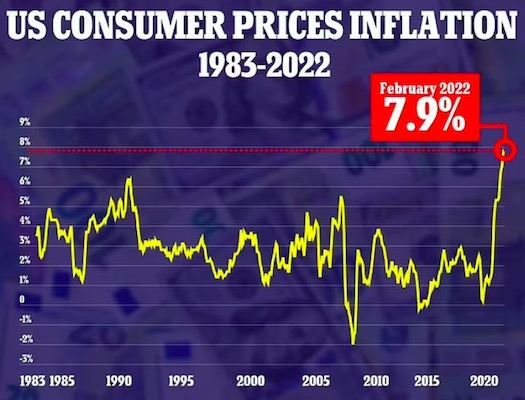 Inflation hits everyone, but it hits the lowest income earners the hardest.

Bloomberg Economics is warning U.S. consumers that they should be ready to shell out an extra $5,200 this year due to inflation — that’s $433 per month.

Salary Finance reported that more than three-quarters of working Americans have said that inflation has affected their finances in the past year.

But it’s not just a matter of juggling funds — a recent poll showed that 1-in-5 workers run out of money between paychecks.

Roughly 20% of employees regularly run out of money between paychecks, up from 15% last year, according to the survey of more than 3,000 working adults in February.

As a result, about one-quarter of those polled said it’s harder to afford necessary expenses and one-third are unable to build savings, issues that are particularly problematic for low-to-moderate income workers.
Source: CNBC

Are these working class people that have been booted out of the housing market by BlackRock the “entitled” ones that Kapito is talking about?

Maybe instead of sending out dire warnings to consumers that he mocks as “entitled” after shafting them, he should have a chat with Democrats whose policies are only adding to the problem.

Maybe Kapito could take a minute or two to give the White House a ring as he (probably) sips Moët and munches caviar on toast points while taking his private jet for an afternoon meeting with Bill Gates, George Soros, and Klaus Schwab about the progress on implementing the New World Order/Great Reset/Build Back Better which is clearly just a “conspiracy theory.”