A bus with Trump art by ClashDaily’s Big Dawg, Doug Giles, is getting a whole lot of attention in the Garden State.

ClashDaily covered the big reveal of the bus here:

The bus features Doug’s “Trumpinator — We The People” art on the back, which the owner has parked facing a busy main road. The bus with the badass Trump art has boosted business for the whole plaza.

After the Ocean County shop was written up on a local blog, co-owner Vinny Scuzzese said he saw a fair amount of negative comments. But it also brought in a flood of new customers.

But the store, which is on a busy town artery, is eye-catching thanks to the owners’ bus parked outside, which Scuzzese and his business partner Greg Dooner had wrapped with a Trump motif. On the back is an illustration of the 45th president in a tough-guy pose wearing an American flag bomber jacket and gripping the Constitution.

“It’s a beautiful picture. We park the bus outside the store, and people pull over, start taking pictures and come into the store. The other shops in the plaza have gotten more business too. It’s been a nice reaction,” said Scuzzese, 57.

Dooner added that they have brought it to rallies and will make it available to rent for parties and special events.
Source: New York Post

With the buzz around the store from the bus and a feature in the New York Post, this little shop might do just fine.

And if the “Let’s Go, Brandon” administration continues on the current trajectory, business could really boom.

Trump supporters are a pretty loyal group and just one year into this administration, there are many Biden voters regretting how they had cast their ballot in 2020. Many Americans would rather have low gas prices, more jobs, and not get entangled in another foreign war even at the cost of a few “mean tweets” to keep dictators in line rather than rampant inflation, gaslighting on gas prices, politicians begging to start WWIII, and looking like a weak, blithering idiot on the world stage led by a senile man who was mediocre at best for his entire 50-year political career. Who knew?

“I invested a lot of money in this store and I’m taking a chance. When I told my family and friends I was going to open this, they said, ‘Are you crazy?’ because I signed a five-year lease,” Scuzzese said, adding, “I’ve been doing business a long time. I go with my gut.”

By the way, you can get yourself one of those epic “Trumpinator” prints at DougGiles.Art.

They laughed when he announced his candidacy. They thought he was going to be some kind of circus act. 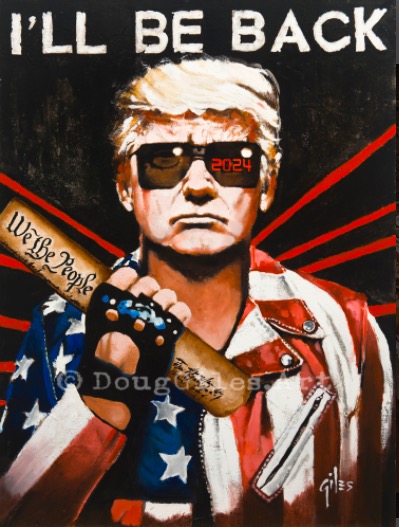 In 2016, Trump survived the primaries and got the nomination. He knocked out Crooked Hillary.

Mueller and the Dossier aren’t just coming up empty, they exposed the misdeeds of Brennan, Comey, McCabe, Strzok, and now Durham is exposing Hillary’s team in the investigation into the origin of the Russian Collusion Hoax.

Trump kept his promises and got things done.

How’s the economy under the Let’s Go Brandon, administration?

Biden promised that he’d “shut down the virus, not the economy.” He literally did the opposite.

Will Trump run in 2024? Is America ready for The Trumpinator to return?

We’ll have to wait and see…