An intelligent leader will realize that more than one thing can be true at the same time. Lindsey Graham should take notes.

First, it is absolutely true that Putin has plunged Eastern Europe into chaos and war through a decision that was entirely his own making.

Second, it is true that Putin is pushing insane propaganda that he is the good guy, coming as a liberator while the West has all kinds of vile lies cooked up and is brimming with evil intent against Russia. Russian Embassy Gaslighting Us About Ukraine Sounds Like They’ve Been Watching MSN

Third, we can agree in general terms Putin is not a good man, and having his unchecked power reigned in would be a net positive — with a couple of obvious asterisks that would go with that statement, including the big question of who and what fills that power vacuum.

But considering the use of Nuclear Weapons has already entered the conversation, the one thing now is NOT the time for is insanely provocative rhetoric that could make Putin’s paranoia seem reasonable to third-party onlookers.

As ClashDaily has reminded us elsewhere, a certain degree of caution and wisdom is needed in moments like these: PROPAGANDA WAR: Let’s Remember The Lessons Of Previous Conflicts… Before Repeating Old Mistakes

Provocative rhetoric like what Lindsey Graham put out on Twitter is the opposite of caution and wisdom and gives both credibility and legitimacy to Putin’s paranoia. 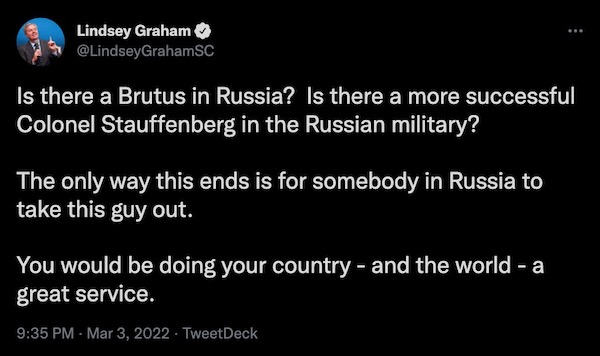 And no, it wasn’t a one-off. He went on TV and made an appeal for the same thing on air.

Hey Lindsey, how well did any of the last half-dozen regime change schemes work out? Are you so sure you want the world’s second-largest nuclear power thrown into that kind of chaotic transition?

Even if you did privately want that outcome, you — a highly-ranked elected official in American politics — have made a public call for the assassination and a coup against a world leader.

How would you respond if Putin made such a call against Biden or Trump?

It’s hard to play the role of international good guy when you are making open calls for the murder of a political rival.

And even if someone did pull that off, is Lindsey honestly expecting a more moderate leader would step into that power vacuum? You have just given them every reason to be justifiably paranoid against American intentions of overthrowing their government.

If you’re looking for a tool to push pusitive change that won’t make the situation much much worse, make this your starting point and work outward from there.