It should be obvious, shouldn’t it? That the moment in which the dissenting voice of reason is the most needed is exactly when it is least present? But that’s now how people work in such situations.

We are emotional creatures. Moments of crisis trigger predictable fight-or-flight tribal responses of us and them. The higher those stakes get, the more likely we are to draw from emotional rather than rational resources.

When that happens, we’re less likely to make reasonable decisions proportional to the situation. The more committed we are to the emotions of the cause, the more likely we are to react irrationally.

Glen Greenwald wrote a wonderful, long piece detailing the parallels we can now see between the unblinking univocal partisan support of Ukraine and the corresponding denunciation of Putin… to similar univocal support of previous conflicts. The obvious one would be following 9/11, but even the ‘international response’ to Assad and Syria or Ghaddafi can raise the same set of questions.

Simply put, our enthusiasm then led to decisions we now regret in the cool light of day. And back then, anyone suggesting caution in our involvement, and asking questions about second-order consequences is branded as being ‘with’ the ‘enemy’.

We are already seeing that tribalism rearing its head with people who ought to know better… including unserious people read into the highest levels of security in the Gang of Eight.

Zealous true believers in the Jan 6 Kangaroo Court were, unsurprisingly, all-in on swallowing propaganda in this case too.

Swalwell AND Kinsinger jumped in on this one. 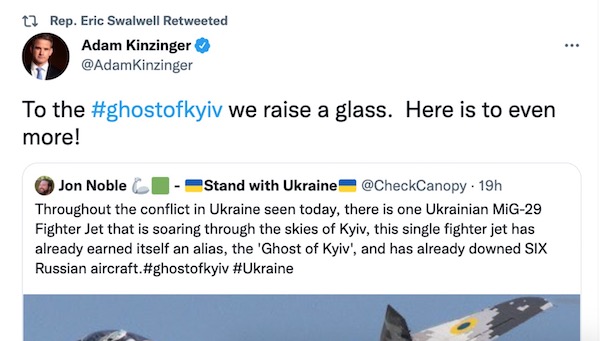 Kinsinger has been eager for America to enforce a ‘No Fly Zone’… without stopping to consider what happens the very first time America is called on to enforce a no-fly zone against a Russian military plane. Even Psaki had the good sense to know that’s a very bad idea.

Swalwell, meanwhile, thinks anyone not rushing to unleash his inner totalitarian is Putin’s puppet. Even when called out for copying some of FDR’s worst instincts, Swalwell stupidly doubles down. 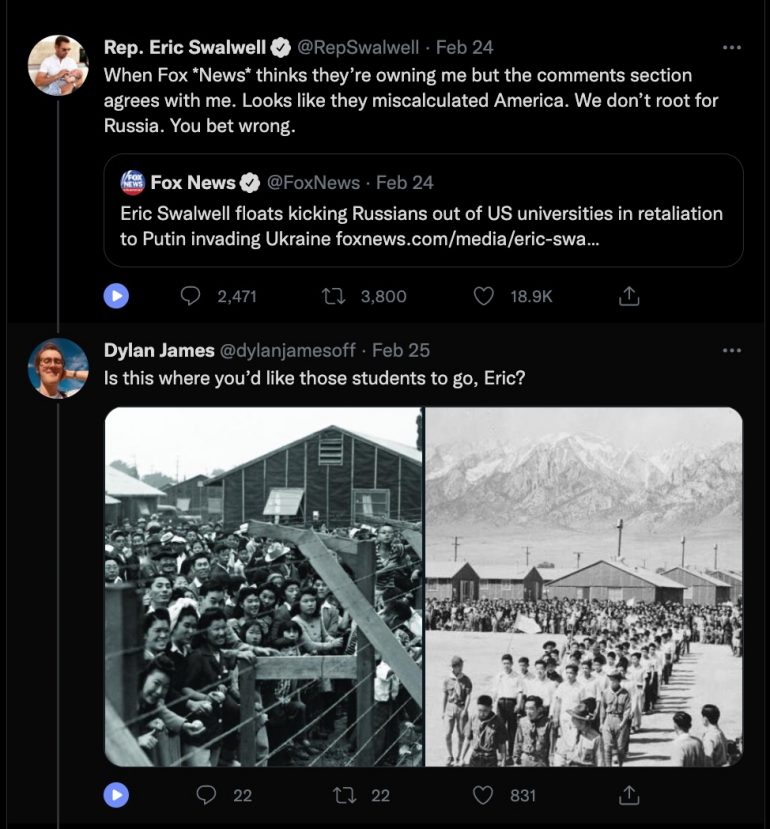 When we fall back to superficial black and white understandings of issues, convinced we know all there is about good guys and bad guys and stop asking questions, we miss things.

Like asking what would happen in the hypothetical case of a Russian leadership power vacuum if Putin were deposed and arrested? Sure it’s easy to denounce him as a tyrant. But THEN what? Did anyone predict Iraq falling into the insane levels of chaos and disorder that followed his fall?

What role do we play — or not?
What outcome are we looking for?
What reasonable off-ramps might be available to deescalate this conflict?
What are the Constitutional obligations we need to abide by in our decisions?

Corners have been cut in previous conflicts, with sometimes devastating results.

Let’s learn from past mistakes, rather than remaking them.