The changes resulted in the 2020 election-night chaos that leaves many with questions about the results in Michigan to this day.

There has been quite a bit of advocacy for no-excuse mail-in voting by left-wing nonprofit groups. One of those groups that received Zuckerbucks, the National Vote at Home Insitute (NVAHI), managed to influence Michigan’s Secretary of State to change the voting rules to do just that in 2020 without going through lawmakers.

A nonprofit connected to Mark Zuckerberg-funded groups worked with Michigan Secretary of State Jocelyn Benson to influence state elections ahead of 2020. The changes include getting the state to alter how it used absentee ballots without an act of the state legislature.

Documents exclusively obtained by The Federalist through an open records request show National Vote at Home Institute CEO Amber McReynolds working with Benson to change Michigan elections policy. NVAHI shares leadership ties with the Center for Tech and Civic Life, a group that shuttled money from Zuckerberg to government election agencies ahead of the 2020 election, as The Federalist previously reported. In several instances, NVAHI and CTCL worked together to influence the 2020 election.

The documents also show that the private organization funded by Facebook tycoon Zuckerberg exists to push states to adopt mass mail-in balloting of the kind that made chaos of the 2020 election.
Source: The Federalist

NVAHI has set out a strategy in 4 points to make mail-in voting the norm in all 50 states. The first goal is to remove any excuse for mail-in voting, the second is to increase the number of states with a permanent absentee voting option, the third is to move to mail-in only, and finally, “reform” the processing of mail-in ballots. 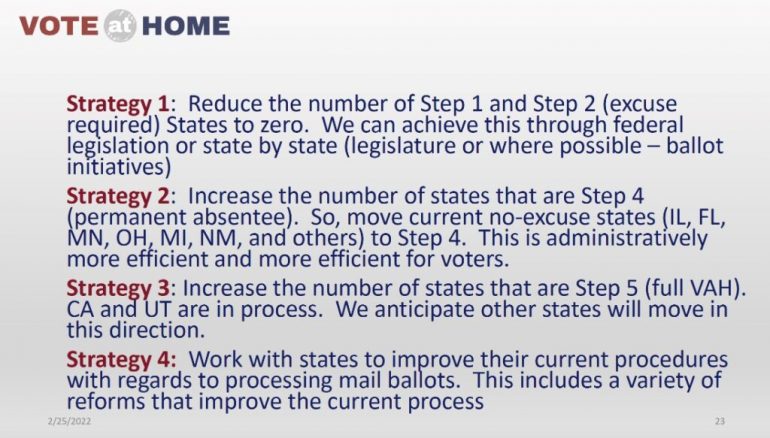 In emails obtained by The Federalist, McReynolds suggested that Benson use administrative rulemaking to implement a permanent absentee voting option in the state completely bypassing the legislature.

Is this acceptable? Changing the rules without going through lawmakers that are accountable to the electorate? It is in Michigan, apparently.

That’s what leftwing groups have been advocating for and they wonder why there are questions about elections.

Way back before a certain orange-tinted candidate with mean Tweets entered the political arena, Jimmy Carter in 2005 and the New York Times in 2012 admitted that mail-in ballots make election fraud much easier.

But in 2020, all of a sudden, mail-in voting was absolutely necessary because of the pandemic.

Remember, it isn’t just the Zuckerberg-funded Center for Tech and Civic Life that was pushing for changes. The Chan Zuckerberg Initiative was part of that “Secret Cabal” that helped “fortify” the 2020 election.

As Time Magazine bragged in February 2021:

In March, activists appealed to Congress to steer COVID relief money to election administration. Led by the Leadership Conference on Civil and Human Rights, more than 150 organizations signed a letter to every member of Congress seeking $2 billion in election funding. It was somewhat successful: the CARES Act, passed later that month, contained $400 million in grants to state election administrators. But the next tranche of relief funding didn’t add to that number. It wasn’t going to be enough.

Private philanthropy stepped into the breach. An assortment of foundations contributed tens of millions in election-administration funding. The Chan Zuckerberg Initiative chipped in $300 million. “It was a failure at the federal level that 2,500 local election officials were forced to apply for philanthropic grants to fill their needs,” says Amber McReynolds, a former Denver election official who heads the nonpartisan National Vote at Home Institute…

…In a presentation to Podhorzer’s group, McReynolds detailed the importance of absentee ballots for shortening lines at polling places and preventing an election crisis.

The institute’s work helped 37 states and D.C. bolster mail voting. But it wouldn’t be worth much if people didn’t take advantage. Part of the challenge was logistical: each state has different rules for when and how ballots should be requested and returned.
Source: Time Magazine

Zuck’s organization was putting ballot boxes in Democrat-heavy districts in 2020.

Hundreds of Michigan residents turned over ballot applications for non-residents, residents that were underage, and those who had died.

Here at ClashDaily, we don’t want to steal The Federalist’s thunder — they did the investigation and have the source documents. Go ahead and click this link to see the evidence they uncovered in their stellar reporting.

In 2020, the change in election rules in many jurisdictions made the conditions ripe for voter fraud by sending out unsolicited ballots to registered voters like the state of Michigan did.

The Left says that voter fraud is rare, doesn’t affect the result of elections, and that it’s overblown by the Right. But we know that it does indeed happen and it isn’t as “rare” as Democrats say that it is, there are sometimes very slim margins in elections, and, just like with other crimes, not every incident is caught.

In September 2021, three women in Michigan were charged with felony voter fraud. One used her grandson’s absentee ballot and the fraud was discovered when he chose to vote in person, but the other two had access to a larger stack of ballots thanks to the universal mail-in ballots pushed by NVAHI.

These are just three women that were caught.

And it’s not just Michigan.

In 2017, one person fraudulently signed 700 ballots in a Dallas, Texas city council election.

In August 2020, the New York Post published an article by an admitted “master” at committing election fraud using mail-in ballots in New Jersey.

During the 2020 election, multiple states have had problems with ballot harvesting and trafficking at drop-boxes. A Wisconsin judge ruled that the ballot drop-boxes used in the 2020 Presidential Election violated state law and has banned the use in the upcoming midterms.

How many of these need to happen before we say that sending out unsolicited mail-in ballots is a bad idea?