By the end of this article, you will probably know more about this week’s Mask Mandate ruling than most of the Democrats who have been critical of it.

Biden just did exactly what we predicted he would do. After objecting to a ruling that curbed his power, rather than fighting the decision on principal, he punted and hid behind the authority of ‘experts’ in lab coats.

What he doesn’t seem to realize is that the system he pretends to be the great defender of was explicitly designed to prevent cloistered groups of unaccountable oligarchs from exercising precisely the degree of unchecked power he wants to weild.

Little Lord Fauci, power-mad troll, has bashed the ruling, claiming that this should be a medical decision, not a legal one. As if there are any bright lines left to separate medical and political decisions — especially in the past two-and-a-half-years, in particular, any decision in which Fauci’s own influence comes into play.

WATCH: Dr. Fauci tells me on #TheSourceKasie??‍♀️ "This is a CDC issue, it should not have been a court issue." @CNN pic.twitter.com/rZZyHnFqJ5

It should NOT have been a ‘court issue’ he says. He thinks we should all be made to bow and scrape to the dictates of unelected experts like … himself. Huh, what a coincidence.

What he either doesn’t know or care about is the fact that the government (and anyone acting in its name) has no mandate to claim unilateral authority over the public to make decrees.

Among the Constitutional checks on power that the Framers provided to act as brakes on each branch’s inclinations to tyranny was the requirement that any powers a government claims to possess must be anchored in a statute, either Congressional or Legislative.

That is the distinction between lawful and lawless exercises of government power, and it is precisely the question that was under scrutiny in the mask mandate ruling.

We first reported on the story and the ruling here:

Anyone wanting to read the full 59 pages put out by U.S. District Judge Kathryn Kimball Mizelle can do so by following this link.

Here is what Democrats are getting wrong with the ruling

There are a lot of things the ‘instant experts’ are getting wrong about this case that any literate person quickly reading the ruling could understand.

This tells us that many journalists really are the unthinking stenograhers Obama’s Ben Rhodes claimed they were in his infamous ‘echo chamber’ comment.

What’s easily overlooked in the hysterical air of politicized nationa debate is the fact that this was an actual case brought forward by a plaintiff with a specific grievance. It was the court’s job to hear that grievance and decide whether it was valid.

None of the finger-wagging authoritiarians on the left look beyond the implications of political to the complaint that led to the ruling in the first place.

The complaint is that the CDC, who was responsible for issuing the Mask Mandate regulations based on an Executive Order Biden passed one day after taking office, had enacted a regulation that was not lawfully passed for several reasons.

The plaintiff’s personal objection came from the fact that the permissible exemptions offered by Biden did not include her own medical condition, namely, anxiety attacks. 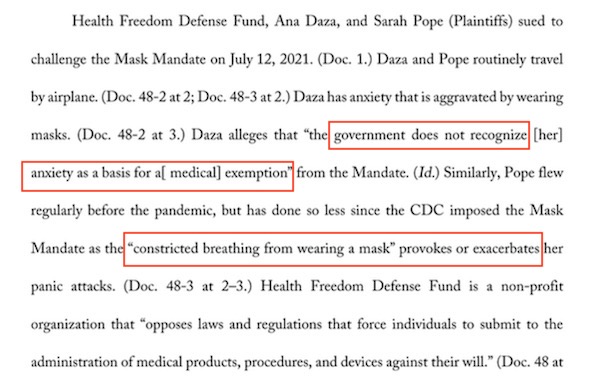 She had been a frequent flier until the mandate was passed, but has subsequently flown less because her medical condition makes compliance difficult.

The plantiffs were petitioning the courts to find the ruling unlawful and strike it down.

Did the CDC Overstep Its Authority?

The four claims that they did exactly that include:

1) The mandate oversteps statuatory authority
2) The CDC improperly invoked good cause exemption to avoid notice and comment
3) The order violates the APA as ‘arbitary and capricious’
4) (Supposing CDC posessed such authority) Congress would have acted improperly in delegating legislative authority to an agency. 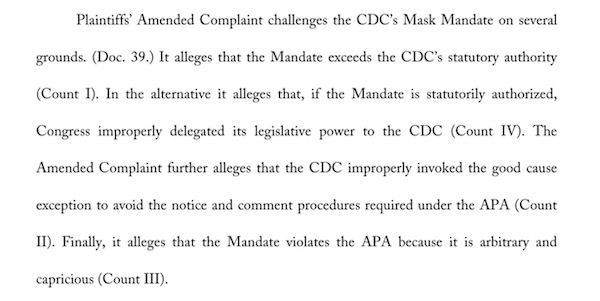 In page 10, they were looking at historical precedent of the Public Health Services act of 1944 (in which the CDC asserts their powers are rooted) applying their limited police powers of detaining individuals for quarantine, and whether they could reasonably apply to forbidding use of or expelling people from the use of public transportation.

The CDC has also invoked use of such powers to shut down the cruise ship industry, interpose themselves in landlord-tenant relations, and insist on masks in public places. One of these had already lost a court battle, and another stands on shaky legal merit. In this case, the third of these CDC’s regulations is under legal consideration.

Starting on page 11, they went into the historical context and language of the statue they drew these powers from, carefully weighing the relationship between quarantine, fumigation, and other words in connection with what was to be the critical word in this list for our moder purposes, ‘sanitation’.

Page 12 explains that the mask mandate is riding the language of ‘sanitation … or other measures’ for their authority. The following pages are a deep dive into how the courts arrived at a proper meaning of the word ‘sanitation’ for this legislation. Since it was not specifically defined, the ordinary use of the day applies.

Page 19 moves on to the history of how the subsection had been applied in the past, namely applying its powers on specific, known cases of diseased animals, individuals, or infectious locations. It has been traditionally limited in scope to defined places, people, and situations. Such public power is historically an expression or use of a STATE police power, and was never intended for blind use across entire populations.

Such a mandate, the ruling points out, not only reverses the historical use of the law, but also reverses the roles of State and federal government.

Another problem, page 20, Sanitation is for property, not people. Page 22 points out the difference between specified quarantine and the detention police powers imlicit in forcibly removing persons from public transportation for non-compliance.

CHEVRON DEFENCE. (Page 25) At least 2 current justices in SCOTUS have taken an interest in revisting the sweeping use of the Chevron Doctrine of letting agencies define their own powers. The invocation of this principle was disallowed this time. Appealing this to a higher court could have far broader effects than the Democrats would want them to have.

All of which led to this statement on page 30:

The other 29 pages dealt with the remaining issues.

Page 31: The mask mandate improperly invoked the good cause exception to notice and comment rulemaking.

The tl;dr version is this: CDC was obligated to open the idea up for 30 days of public debate nd consultation. They sidestepped that process claiming the urgency of the issue gave them reason to rush it forward. The judge found their reasons for doing so less than persuasive, and explained why in the following 15 pages.

Them mandate itself was accused by the plaintiff as being arbitrary and capricious in 3 particular ways. (Page 47). 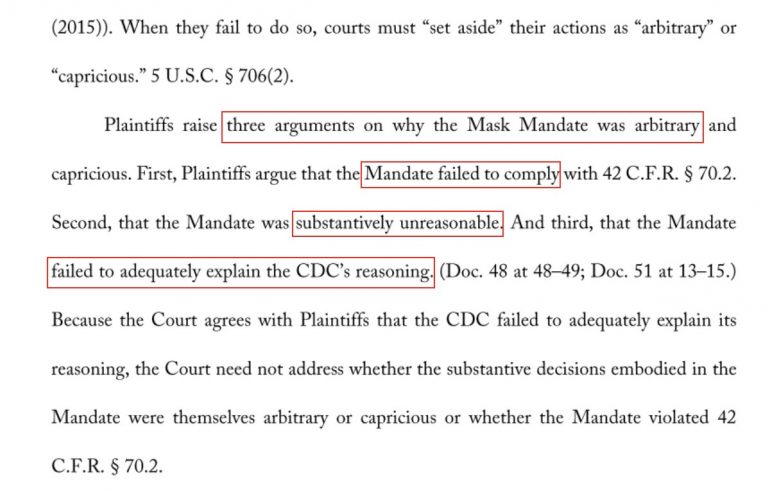 Because the judge found at least one of those three tests persuasive, the mask mandate was declared to have been capricious, explaining her reasoning through to page 53.

Now that she’s detailed in great depth the reasoning that went into those decisions, she moved to the considerations that influenced her ruling before declaring that she was ultimately vacating (striking down) the mandate.

Now that you are armed with an understanding of the issue, the ball is in the court of Democrats and their media flunkes to defend which of those rulings they disagree with, and on what basis.

If they claim to hate ‘disinformation’ so much, let’s see what happens when we call out theirs.