At what point exactly, does this become elder abuse?

President Joe Biden was treated like a child at the White House’s annual Easter Egg Roll on Monday.

It’s even more embarrassing because this happened in front of a whole lot of children.

Right from the get-go, the First Lady was telling him what to do.

Admittedly, the Easter Egg Roll is one of the events at the White House that the First Lady tends to run, but does that include treating the Leader of the Free World like he can’t remember what he’s supposed to be doing?

Okay, so it does seem like that more often. His public appearances just keep getting weirder and weirder.

BIDEN: “I was in the the foothills of the Himalayas with Xi Jinping, traveling with him, that’s when I traveled 17,000 miles when I was Vice President. I don’t know that for a fact.” pic.twitter.com/hoiGCUGckR

Biden shakes hands with thin air, and then wanders around looking confused… This is no longer funny.pic.twitter.com/4mqf3Z8ZU5

But still — if he’s this bad, why keep trotting him out in public? He looks so old, weak, and confused.

When the pair went to participate in the Reading Nook, Joe joked that they wouldn’t let him read, but Jill threw him a bone and let him take the first page.

“They’re not going to let me read at all,” Biden complains.

Still, she made a face when he was looking at the book. 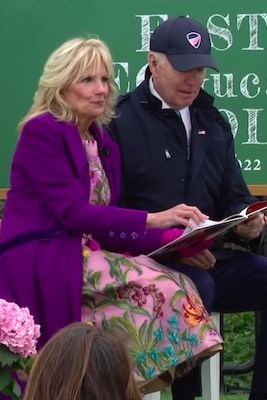 After they finished reading, she touches his arm and tells him to “stay.”

It’s all a big joke because Jill is a “teacher” — but she was a college professor, not an elementary school teacher that has children sit in a circle on the carpet.

At least, let’s hope she doesn’t have her college students sitting in a circle on the carpet. But with the way she treats her husband, one cannot be so confident that she would treat her students any better.

That wasn’t the end of the indignities that Joe suffered on Monday.

His son Hunter was spotted at the Easter Egg Roll with the young child of his that Joe and Jill actually acknowledge — as of last Christmas, no one in the Biden family had met the 3-year-old daughter that Hunter has with former stripper Lundon Roberts, and it’s pretty unlikely that anything has changed in that regard. So much for the Bidens sticking together, eh?

Hunter Biden and his son Beau having a blast at the White House Easter Egg Roll. (To those of you who don’t know me very well, that was sarcasm.) pic.twitter.com/scxAOonNTI

But even worse than having the family Bag Man with a clearly moody toddler present at an official event, was being herded by the Easter Bunny away from a crowd.

A White House staffer dressed as the Easter Bunny stepped in front of the President of the United States as he is greeting people on White House grounds.

Old Man Joe couldn’t even stand up to the Easter Bunny pic.twitter.com/LyILRSlRD6

Another angle explains why… Joe was going off-script and talking about Afghanistan and Pakistan without the White House staffer-prepared cards.

Joe Biden was commenting on Afghanistan and Pakistan when he was lead away by the Easter bunny
pic.twitter.com/BmKCv2dQi5

Only the White House communications department would be ready to intervene there.

So we now know the Easter Bunny was someone inside the comms shop.

The White House literally put one of Biden’s handlers in an Easter Bunny suit to keep him from talking to reporters. Just incredible stuff. https://t.co/plisKk9Pb6

It kind of makes you wonder just what sort of “no filter” comment Joe was about to make, doesn’t it?

How bad does the White House staff have to think Biden is to calculate that sending in the EASTER BUNNY to interrupt a gaggle is better optics than whatever he was about to say on Afghanistan? https://t.co/AKnXiq5VWr

Joe’s occasional bouts of confusion and misspeaking were kind of funny at first, but now it’s just getting uncomfortable.

Maybe Australian commentator Rita Panahi is right and Joe just needs a nap and a bowl of soup.

Joe has always been clueless, but he was able to string together a complete sentence just a few years ago without slurring his words.

It almost makes me feel bad making fun of him.

This guy who was a mediocre politician for 40 years managed to leverage that into an “aw, shucks” image in order to create a very lucrative family business of influence peddling that might even make the Clintons blush.

And Democrats decided to trot him out in 2020 anyway.

They all deserve the derision.