The outlook is so bleak that even Dem candidates in districts that Biden won by 15 points are at risk of losing their seats.

The Cook Political Report‘s revised House forecast is very bad news for Dems showing Republicans gaining somewhere between 20 to 35 seats. This was a shift of 10 races in the GOP’s favor, while only 2 shifted toward the Democrats. In addition, 35 Democrat-held seats are now labeled “tossup”… or worse.

This year was always going to be difficult for Democrats — historical trends suggest the president’s party typically loses seats. 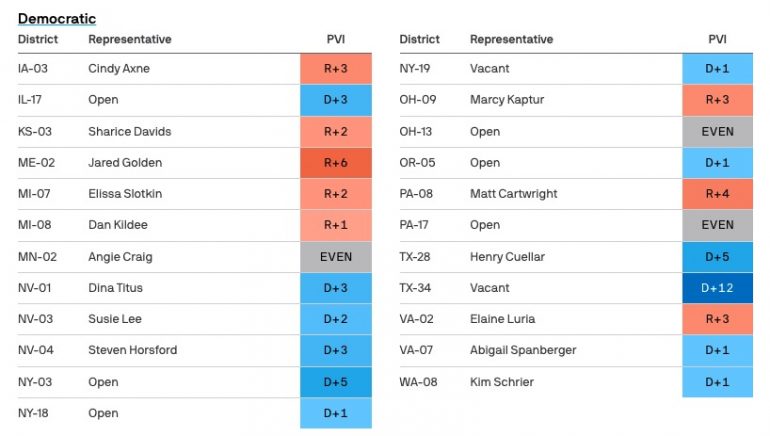 While losing the House isn’t much of a surprise, the thought of losing control of the Senate — even a few months ago — wasn’t much of a consideration. Most pundits thought that the 50/50 Senate would stay that way after November 2022.

In an op-ed in The Hill, Lib Journo Albert Hunt, made the case that even though Democrats are “running better candidates” than Republicans, they may not be able to keep the Senate.

Hunt’s almost cartoonish characterizations (linking to articles, of course,) of Herschel Walker running in Georgia and J.D. Vance in Ohio as well as his praise for Democrats like Sen. Mark Kelly (D-AZ) and Sen. Raphael Warnock (D-GA) make his bias clear. That’s fine — it’s an opinion piece after all. We can disagree on what “strong” and “weak” candidates look like because we have different political lenses.

Disregard the bias for now — it’s the way that he begins and ends the piece that is important to note.

The contest this year for control of the evenly divided Senate comes down to “candidates,” where the Democrats have an advantage, versus “the climate,” which may prove lethal for them.

As the fall field takes shape in a half dozen Senate races that will determine the majority next year, Democrats have stronger candidates, or the Republican standard bearer is more flawed. However, with raging inflation, high gas prices and President Biden’s low approval numbers — and given the historical pattern of midterm setbacks for the party that controls the White House — better candidates may not much matter…

…The bottom line for Democrats: If by October, inflation declines to 5 percent or less (about the same as the growth rate in wages) and Biden’s job approval moves above the low 40s (possible only if other Democrats start talking about what he has accomplished rather than what he hasn’t done) they have a shot — with better candidates — to hold the Senate.

There is no margin for error.
Source: The Hill Emphasis Added

Hunt’s basically saying that if Democrats in the House stop all of their outrageous spending, the external factors suddenly alter — like Russia’s invasion of Ukraine and a global wheat shortage — we turn back time and allow more drilling, prevent a shortage in baby formula, and Biden suddenly learns how to speak clearly and run the country in the next 4 months or so… there’s a chance that they could keep the Senate in Democrat control.

That’s coming from someone who is clearly a Democrat cheerleader.

Despite Hunt’s wish-casting, the Cook Political Report shows that Republicans have the lead in a handful of tossup Senate races including a few Democrat-held seats.

It also appears that a few Democrat governors are facing a tough battle in November — and that’s with “abortion on the ballot” as Axios notes.

It looks like voters are waking up that Democrat policies aren’t so great after all.

It’s almost like the Biden-Harris administration has been a giant Red Pill for the entire country.