Here’s another opportunity for the press to prove us wrong about how corrupt they are. If a scandal can hurt a Republican, it’s big news. If it can hurt a Democrat, it gets swept under the rug.

Case in point, for some reason it was super-important to that same silent media that we hear about Jenna Bush having a beer or whatever when she was 19, while Malia having wine at 20 was defended as a non-scandal.

And let’s not even get started on the media’s handling of their darling Beto’s experience with drinking and driving.

Whether or not you think a drinking age higher than that of enlistment makes any sense at all, the point is the party-specific double standard in reporting.

Now that Nancy Pelosi’s husband has been booked on DUI charges we expect the ‘maninstram’ media will be very interested in holding a powerful gazillionaire to account.

The House Speaker’s spouse was arrested just before midnight Saturday night in Napa County, and then booked hours later into jail on two counts — driving under the influence and driving with a blood alcohol content level of 0.08 or higher … both misdemeanors. –TMZ

Here’s the photo that came with the story. 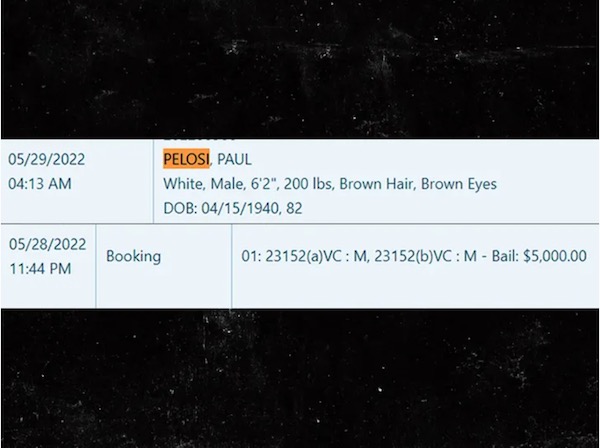 Another source fleshed out more of the details:

The husband of US House of Representatives Speaker Nancy Pelosi has been arrested on suspicion of drink-driving in California.

Paul Pelosi was held after his Porsche was involved in a collision with another vehicle in Napa County on Saturday night.

No-one was injured and the other driver was not arrested.

…The California Highway Patrol said Mr Pelosi had been attempting to cross State Route-29 when his car was struck by a 48-year-old man driving a Jeep.

…The California Highway Patrol said Mr Pelosi had been attempting to cross State Route-29 when his car was struck by a 48-year-old man driving a Jeep. —Yahoo

Nancy, who had been giving an address in Rhode Island’s Brown University, is not believed to have been with him when it happened.