This was bound to happen. It’s just amazing that it has taken so long.

A prominent Canadian university posted an image to mark the “International Day Against Homophobia, Transphobia, and Biphobia” on May 17 that sparked an immediate backlash from the local Muslim community.

You can be forgiven if you didn’t have an opportunity to buy a card, bake a cake, or plan an event to mark the solemn international day — no one would really expect it to be before the May Two-Four weekend. Most Canadians probably thought that it fell somewhere in Canada’s “Pride Season” which now lasts all summer long — from June through September.

But Western University was prepared.

They had a poster created to mark the day and it was delightfully intersectional and probably received top marks from the Diversity, Inclusion, and Equity (DIE) department — only 3 out of the 8 people depicted were white. That’s some pretty amazing inclusivity for a country that is approximately 78% white!

Unfortunately for the DIE department, it appears that the poster was a little too intersectional by depicting two women in hijabs leaning toward each other for a kiss. 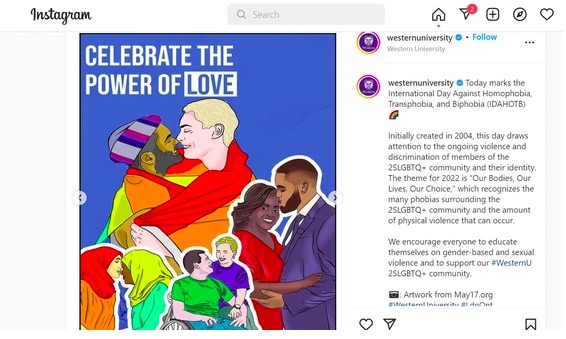 The Muslim community in London, Ontario, where the university is located, was not too pleased. Critics called the image “disrespectful” and “inappropriate.” One wrote, “Shame on you Western for such an insulting mockery post to my religion.”

Muslim community leader, Iman Abd Alfatah Twakkal, said that the London Muslim community was drafting a response to the poster. He said, “While we appreciate that the intent is to promote inclusion the poster is doing the opposite… singling a Muslim religious symbol in that setting is inappropriate.”

It seems that Western U wasn’t sure what to do after kicking over the hornet’s nest.

At first, it looked like the university was prepared to stand its ground, but it didn’t take long for administrators to cave.

In response, school officials initially appeared to stand behind the poster, noting they understood “how complex and intersectional this topic is” and that the “imagery may be upsetting to some Muslims.” But on Wednesday, a Western official who oversees equity, diversity and inclusion issued a statement noting the image had been removed.

“We believe this presents an opportunity for genuine, thoughtful discussion about how we can best support members of the Queer Muslim community, and those from all faiths and backgrounds within the 2SLGBTQ+ community,” said Opiyo Oloya.

“In order to promote that discussion, we have removed the image from the post to not distract from these important conversations.”

The image on Instagram sparked an online petition that said that it “depicted two women in Hijab engaging in a sexual act” and demanded that the post be removed and that the University issue an apology to the entire Muslim community.

The lengthy petition description says, “It should be made clear that this is not an attack on the LGBT+ community, and the existence of queer Muslims is acknowledged.”

It also says, “What is portrayed is extremely disrespectful, insensitive and completely imperceptive to the Muslim community at large.”

The petition makes it clear that “if you are not Muslim, you have no right to tell us what we can and cannot find offensive” and says that many of the members of the Muslim community that were offended by the post were women who wear the hijab. They also called it “tokenizing and fetishizing” a religious symbol.

Aiming straight for the DIE office, the petition concludes:

Overall, the depiction of the Hijab in such a context is disrespectful, tokenizing, and attempting to redefine elements of the Hijab by sexualizing and fetishizing an element of Islamic Religion that is supposed to desexualize and encapsulate modesty. The Muslim community should not and will not allow the colonist mindset to question if we have the right to be upset; we do, and we are. The response from Western University has engaged in ethnocentrism and decided to take a beloved element of our Religion and use it as a prop to broadcast what they deem worthy. Irrespective of the concerns of the Muslim community.

As of Thursday morning, the petition has garnered over 23,000 signatures.

Now we know for sure when it’s a head-to-head match-up between the 2SLGBTQQAI+ (per Dear Leader Trudeau) community and Islam, it’s the religious rights that will be given deference.

Although, it’s not the same for Christian religious rights.

In Canada, it’s open season on Christians if they dare say anything that might offend anyone in the 2SLGBTQQAI+ crowd.

Christian pastors have been repeatedly targeted and harassed by activists for sounding the alarm on the push to indoctrinate children with radical gender theory, preaching the Gospel message in a predominantly 2SLGBTQQIA+ neighborhood, and even opposing the Liberal government’s blanket ban on “conversion therapy” which criminalizes teaching that affirms Biblical sexual morality and could land pastors in jail for up to 5 years.

Welcome to the inclusive bastion of progressivism known as Canada, eh!