So is taking medication meant for animals bad or not? According to Vice, that depends.

Motherboard, the tech arm of Vice News, is “helping” terrified Libs who want to continue to murder babies in the womb. They think that the leaked draft of the SCOTUS decision on Dobbs v. Jackson Women’s Health Organization means that abortion will be completely unavailable in the United States immediately and we’d enter some Lib version of “The Handmaid’s Tale” which most of them clearly never read.

Of course, that’s actually not what would happen.

The draft decision is pretty clear — instead of having a federal rule on abortion, it would be up to each state to pass laws to either restrict or expand access.

But unhinged leftists are still shrieking about how women are being forced to give birth or some nonsense.

Motherboard published an article that links to a 17-minute video by Mixael Laufer, who is a member of an anarchist group charmingly called the “Four Thieves Vinegar Collective” which explains how to make abortion pills from some household ingredients and a medication used on livestock.

Misoprostol is relatively easy to acquire from veterinary sources, since in addition to medically inducing abortions, it’s also used to treat ulcers in horses. https://t.co/nglKSGjXA0

In the video, Laufer explains that, besides being used to medically induce abortions, misoprostol is also used to treat ulcers in horses. This makes misoprostol powder relatively easy to acquire from veterinary sources. 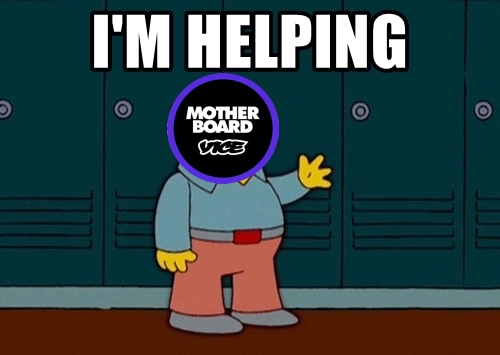 There’s so much wrong with this — anarchists making videos to teach people how to create their own abortifacients using medication used to treat horses with ulcers. What could possibly go wrong with that?

But it’s the hypocrisy that is just so spectacular.

The tweet about Rogan is still up, by the way.

Rogan has recovered from COVID-19 and used his first show back to spread misinformation about the horse-deworming drug he took. https://t.co/YijW7YWpon

Incredibly, after dismissing the use of Nobel Prize-winning miracle drug Ivermectin to treat COVID, they’re really pushing this new horse med to kill a baby.

The article even makes reference to their earlier reporting on Ivermectin and dismissed its use for COVID as a “conspiracy theory.”

(This is reminiscent of ivermectin, which is used to control parasites in horses but also became a favored—but ineffective—COVID treatment among conspiracy theorists. Ivermectin’s use in horses made it easier for humans to get without a prescription.)

It’s pretty bold to call it a “conspiracy theory” when Pfizer literally made a COVID pill that works in the body the same way that Ivermectin does.

But it appears that the tech arm of Vice claims to know more about Ivermectin than the woman who compiled the metadata on the studies and doctors who have been treating COVID patients with it.

While Ivermectin was generally used to treat parasites, doctors and scientists have called it a miracle drug and new uses are still being studied — including as a potential cancer treatment.

It’s also being studied as a possible COVID therapeutic by the National Institute of Health in the Good Ol’ U.S. of A.

Because it’s accessible, showed some promise in trials, and had relatively mild side effects, medical experts around the world were calling for Ivermectin to be used to treat COVID.

Joe Rogan was universally mocked for taking it (along with a cocktail of other things) and he recovered in just a few days.

There was a whole lot of disinformation that people were being hospitalized after taking Ivermectin — but the main story that spread like wildfire wasn’t true at all. Oddly enough, a “Disinformation Governance Board” wasn’t set up to combat it.

At least Motherboard added something of a disclaimer and suggest that maybe it isn’t a good idea to make your own abortion pills without any medical supervision whatsoever.

Motherboard cannot speak to the safety of making your own pills, and the Four Thieves Vinegar Collective has been criticized by some in the pharmaceutical and medical establishment who think that making DIY medicine isn’t safe under any circumstances. In a progressive, just world, abortions would be free and safely administrated by medical professionals. But we have seen time and time again that attacks on abortion access lead to less safe abortion alternatives performed by a patient themselves or without medical supervision. If Roe is overturned, we are going to see more people seeking DIY abortion methods, which will include making their own abortion pills. Laufer says they hope that people who make the abortion pill are doing so proactively and as a precaution, and not under emergency circumstances.

Someone over at Motherboard clearly didn’t like that they were suddenly being mocked online for pushing a veterinary ulcer medication for DIY abortions while making fun of Joe Rogan for taking a Nobel Prize-winning “miracle drug.”

In a progressive, just world, abortions would be free and safely administrated by medical professionals. Attacks on abortion access don’t stop abortions, they just lead to less safe alternatives. https://t.co/LJ5ZA8rPw5

The article talks about “a progressive, just world” — is it just to kill a baby simply because it’s inconvenient and/or unwanted? That’s what abortion is, and that is ghoulish.

Wow. @VICE promoting DIY abortions. This is insane and gross and not just lethal for children, but extrneely dangerous for women

Some advice regarding veterinary medicine: https://t.co/4oiCYKCAkq

A parody account called the U.S. Ministry of Truth weighed in.

It seems unlikely that the FDA would agree with that tweet, but if the Ministry of Truth says it’s true, it must be.

The DIY abortion pill article was written by a man. To this pro-life woman, it’s always weird and creepy when a man is advocating so hard for abortion. Kinda makes you wonder why he’s so comfortable doing that.

There’s something else weird here… why isn’t this being flagged by Big Tech?

If you discussed ivermectin, a Nobel Prize-winning drug, as an effective COVID treatment, Big Tech banned you.

But if you advertise how to murder a baby using horse ulcer pills, Big Tech is all good with that. https://t.co/mFXnn7dV9T