Does this mean that Congresswoman Alexandria Ocasio-Cortez (D-NY) thinks that some of her followers are on drugs? Well, that would explain a few things…

Rep. AOC posted an image to her Instagram stories with an all-caps heading, “TEST YOUR DRUGS!” In the post, she wrote to her followers, “Surprise! Supply chain is affecting drugs too!”

She included a link to an Instagram post by The Guardian that stated that nearly half of the pills sold as ecstasy at U.K. festivals had no MDMA in them.

“Studies are showing nearly HALF of ecstasy pills contain no MDMA at all. The biggest risk to look for is fentanyl,” wrote Ocasio-Cortez.

“Despite the US federal gov having a strict abstinence-only legal approach, the reality is that there are people do choose to do drugs or struggle with addiction. Harm reduction allows us to keep people safe and tell those who engage: TEST YOUR DRUGS!” stated AOC in her Instagram post.

She included a link to a guide from NYC Health that is titled, “How To Test Your Drugs Using Fentanyl Test Strips.” 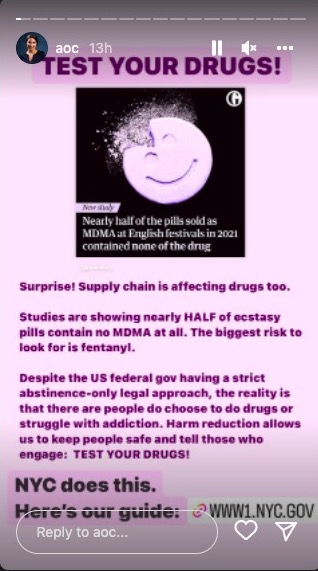 AOC has long held the progressive “harm reduction” strategy that has been embraced and promoted by the left including the Soros-founded Open Societies Foundation.

The Open Societies Foundation says that harm reduction “refers to an approach to services and policy that protects the life, health, and dignity of people who use illegal drugs and their communities.”

Rather than stigmatizing illicit drug use, the approach is to encourage people who do use illegal drugs to do so “safely” with needle exchange programs, supervised consumption sites, and non-abstinence housing policies.

In 2019 and in 2021, AOC was pushing for federal studies on the potential benefits of some Schedule 1 drugs such as psychedelic mushrooms, MDMA, psilocybin and ibogaine.

She stated in a tweet that some of these Schedule 1 drugs have shown promise in medical treatment such as PTSD and opioid addiction.

She was unsuccessful in convincing the majority of her colleagues to back her. Twice.

While there may be some medical value to these drugs, there are also drawbacks, and one very serious one is addiction. We are seeing that on a daily basis with the opioid crisis.

AOC lives in a very different world from the rest of us.

She’s also from a place that has decided to promote “safe” illicit drug use as though there is anything “safe” about putting poison into bodies.

Critics of the “harm reduction” strategy say that the tacit approval by governments has only made the problem of drugs even worse and has exacerbated the problem of homelessness.

The critics of so-called “harm reduction” aren’t always the people that you’d think they’d be.

For decades, California & New York governments have warned against, and shamed, smoking cigarettes

Today, they run ads destigmatizing and promoting the “safe use” of fentanyl & other deadly drugs

In a tweet that followed, Shellenberger pointed out that both California and New York stigmatize smoking but don’t do the same for illegal drugs. He posted a pair of side-by-side images from each state that shows the stark comparison. 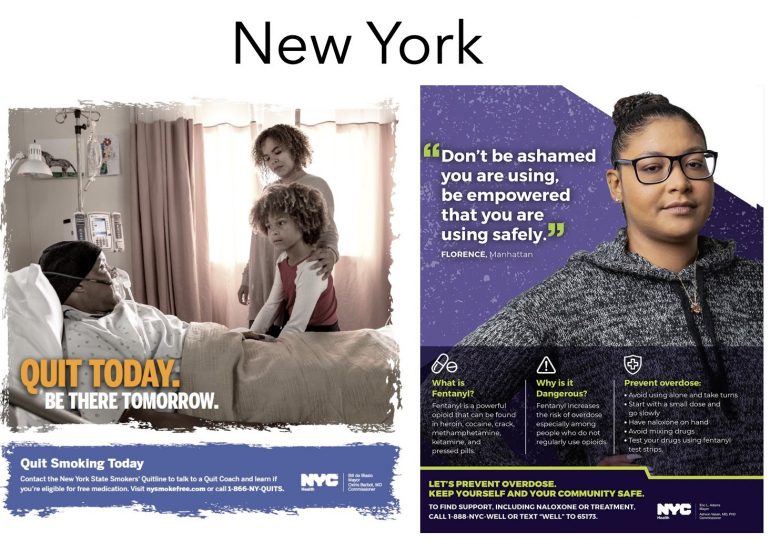