Abortion is NOT a Constitutional right. So says the law of the land.

The worst-kept secret in judicial history is now legal precedent. Roe has been struck down.

In one of the most anticipated rulings in decades, the court overturned Roe, which first declared a constitutional right to abortion in 1973, and Planned Parenthood v. Casey, which re-affirmed that right in 1992. The decision followed the leak in early May of a draft opinion showing that a majority of the justices were privately poised to take that step. On Friday, they made it official.

…But by overturning Roe and Casey, the decision also opens the door for states to enact far more dramatic abortion restrictions, including outright bans on the procedure. Mississippi itself has indicated that it will enforce a different state law, passed in 2007, that prohibits virtually all abortions, except to save the life of the mother or in cases involving rape. A dozen other states have passed similar legislation, known as “trigger laws” because they were drafted to go into effect if Roe and Casey were overturned. An analysis by the Guttmacher Institute predicts that 26 states are likely to ban all or nearly all abortions.

The vote to overturn Roe was 5-4, with Justices Clarence Thomas, Neil Gorsuch, Brett Kavanaugh, and Amy Coney Barrett joining Alito’s opinion. Chief Justice John Roberts filed a separate opinion, agreeing with the court’s decision to uphold the Mississippi law but arguing that the court should not have decided the broader question of whether the Constitution protects abortion at all. The court’s three liberals, Justices Stephen Breyer, Sonia Sotomayor, and Elena Kagan, filed a joint dissent. —SCOTUSBlog

This does not mean abortion is outlawed or illegal.

What it DOES mean is that the courts never had the decision to legislate on this question in the first place. That was the role of the citizens and those they chose to enact legislation.

Each state will have the right to say what its own laws will look like.

New York, California and Vermont will still be able to have abortion policies that echo North Korea and China’s right-to-the-moment-of-birth policy. Red states like Missouri or Texas can ban abortion in all but the most specific of instances. 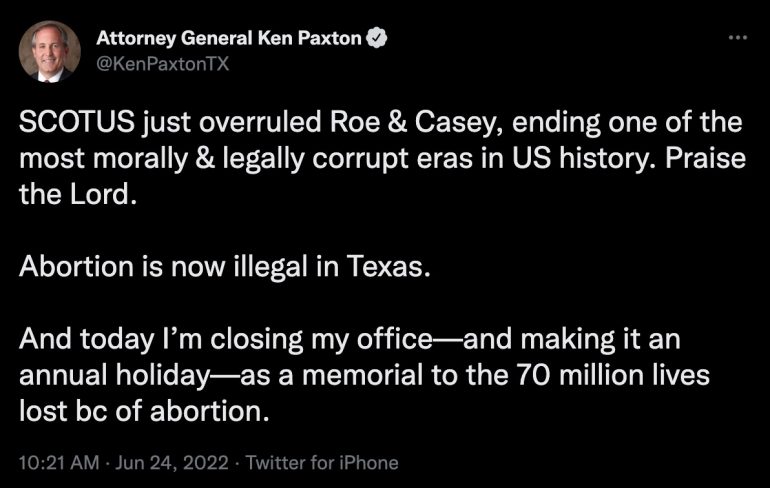 In the end, most states will probably fall somewhere between those ends of the spectrum with at least some kind of an upper limit to when they think a reasonable cut-off point should be.

The entire decision of the Court can be read here.

Justice Clarence Thomas’s concurring decision has made the Libs even angrier than the overturning of their beloved Roe. He wrote that other it is the duty of the Court to reconsider other “demonstrably erroneous” decisions in order to “correct the error” of those precendents. He specifically cites birth control (Griswald), sodomy (Lawrence), and same-sex marriage (Obergefel).

For that reason, in future cases, we should reconsider all of this Court’s substantive due process precedents, including Griswold, Lawrence, and Obergefell. Because any substantive due process decision is “demonstrably erroneous,” Ramos v. Louisiana, 590 U. S. ___, ___ (2020) (THOMAS, J., concurring in judgment) (slip op., at 7), we have a duty to “correct the error” established in those precedents, Gamble v. United States, 587 U. S. ___, ___ (2019) (THOMAS, J., concurring) (slip op., at 9). After overruling these demonstrably erroneous decisions, the question would remain whether other constitutional provisions guarantee the myriad rights that our substantive due process cases have generated. For example, we could consider whether any of the rights announced in this Court’s substantive due process cases are “privileges or immunities of citizens of the United States” protected by the Fourteenth Amendment.

Get ready for the Dems to try to pack the Court after this.