Not only are the Democrats planning not to ‘let a crisis go to waste’ some are drawing a line in the sand saying they will burn down any pretense of America remaining a Republic to do so.

What do the moderates who didn’t like mean tweets think about that now that we have Democrats openly saying they are NOT interested in using the legislative process in the way the Framers they want.

They are more than willing to use naked power to bypass every check and balance put in place to prevent one faction from putting a personal agenda ahead of the good of the nation.

"You will not stop us from passing [gun control]. If the filibuster obstructs us, we will abolish it. If the Supreme Court objects, we will expand. We will not rest until we've taken weapons of war out of our communities." pic.twitter.com/0x3t1aJXBn

If they can’t pass this bill? Blow up the filibuster.

If SCOTUS tells them it’s unconstitutional? Pack the courts with people who won’t.

If you want to track the progress of the Bill he’s so willing to wipe his ass with the Constitution to push forward, you can find it here.

Tim Young made a good point: 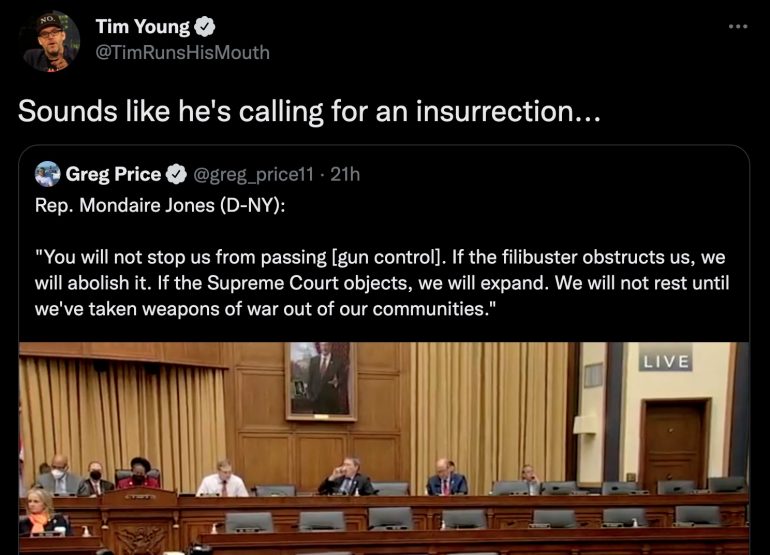 Forget the half-million to a million crimes that studies even in Obama’s White House had indicated that gun ownership has averted in a year, or all the victims saved by that.

Forget that these same clowns wrapped themselves in fences and surrounded themselves with armed protection for Biden’s inauguration at tremendous taxpayer expense. When it’s their skin in the game, they harden the target so murderous slobs can’t waltz in and rain Hell on innocents.

But when it comes to our kids? They won’t ramp up protection.