A few hundred people gathered at an unauthorized party in DC, and it didn’t take long for a minor incident to spin WAY out of control.

The tragedy unfolded at about 6 p.m. at an informal, un-permitted event “associated with a group known as Moachella,” Washington Metropolitan Police Department chief Robert Contee said at a briefing. “There was a truck that had people playing music on it.”

There were several stages of escalation in the violence at the event.

The first stage involved an ordinary fistfight that was broken up.

The second step is unclear, but that one had people in attendance beginning to scatter. You can see that moment in this video.

🚨#BREAKING: Teenager killed and 3 others injured at a music event called Moechella

DC police have reported 4 people were shot at a #Juneteenth music event a 15-year-old boy has been pronounced dead 3 others have been transported. pic.twitter.com/KZOWr907Ra

Authorities began shutting down the party and sending people home over safety concerns.

Another incident happened near the first responders who were tending to some people who had been trampled while running from a previous incident. Then all hell broke loose.

That’s when three civilians, including the teen, plus a police officer were shot, he said. The officer sustained a gunshot wound to his “lower extremity” and was “going to be ok,” Contee said. The other two victims were in stable condition as well, he added.

Several firearms were recovered, one of them from one of the shooting victims, Contee said. “We are working very closely with our partners here in the public safety cluster” and investigating.

“The officers did not fire,” Contee said, noting that about 100 officers responded. “We had a lot of officers in the area but none of them fired any shots.” —NYDailyNews

Developing: Multiple people have been shot including an officer, at 14th and U St in Washington, DC, according to authorities pic.twitter.com/ls1oQCCqSz 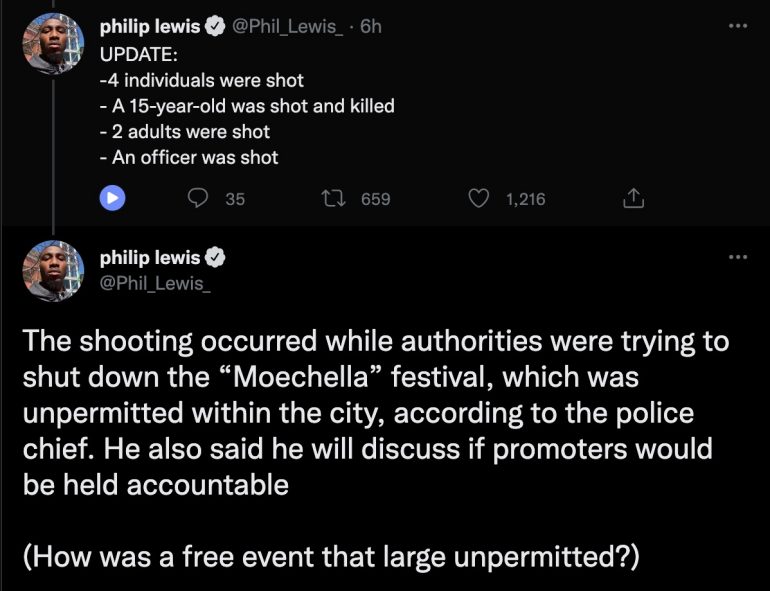 Someone in the comment section who claimed to be in attendance made reference to a stabbing which has not been mentioned in any of the news reports. If accurate, this might explain what one of the unspecified events in the reporting was.