If an incident with 21 fatalities in a school was serious enough to give Constitutional gun laws a rethink what about 46 bodies in a single incident in our cartel-controlled Southern border?

When Kamala finally showed up for a ‘border’ photo op a few hundred miles from where the crisis was actually playing out, she giggled and refused to take it seriously.

Some 3 million or more (known) people have poured through our unenforced border, and while our border agents were busy gathering up the border-jumpers, criminal cartels would use the distraction to bring things (and people) that could not so easily cross the border.

San Antonio Fire Chief Charles Hood said that at least 46 people were dead and that 16, including four children, had been hospitalized.

The grim discovery was made early Monday evening in an undeveloped area of southwest San Antonio near the railroad tracks. Someone who works in the area reported hearing a cry for help and spotted at least one body, officials said.– MSN 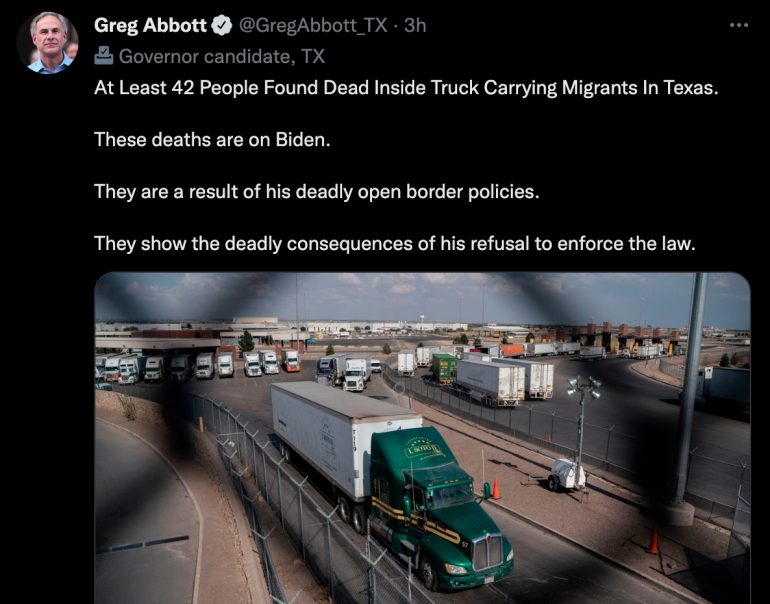 “We’re not supposed to open up a truck and see stacks of bodies in there.” San Antonio Fire Department says 46 dead migrants found inside tractor-trailer were “hot to the touch,” rig had no working air conditioning.

This is said to have been the scene where it happened.

According to emergency personnel, Reportedly an 18 wheeler packed with illegal aliens was found abandoned in the city’s southwestern edge resulting with 42+ dead inside the truck pic.twitter.com/h1PyF6Ud39

There are far more deaths of foreigners crossing the border than those open-border zealots would have us believe. Some drown in the Rio Grande, others succumb to harsh conditions, sometimes mere yards from a highway. Others are victims of violence at the hands of the criminal cartels to whose care they’ve entrusted themselves.

Some simply can’t keep up with the group and get left behind. And those aren’t the only people dying in large numbers as a result of this administration’s reckless border policy.

If you’re looking for an explanation for why our fentanyl poisoning deaths have been skyrocketing, you need look no further than the open-border policies Biden acted from Day One.

Here’s a GOP assessment of the problem from February of this year. The problem today is getting worse, not better.

President Biden and Congressional Democrats’ open-border policies have allowed for fentanyl to flow across our borders and into our communities.
Drug overdose deaths in the U.S. topped 100,000 in 2021, for the first time ever in a year.
In 2021, U.S. drug overdoses due to fentanyl skyrocketed, and it is now reported to be the leading cause of death for Americans aged 18-45.
Fentanyl is freely flowing across our borders as seizures increased by 134% in FY2021, under President Biden’s watch.
In FY21, 11,201 pounds of fentanyl were seized by Customs and Border Protection, which is enough to kill every American nearly seven times over.
Fentanyl poising deaths doubled in 30 states between 2019 and 2021, according to an analysis of U.S. government data.
Fentanyl and its analogues are easier to produce than cocaine or heroin – it only takes a few hours to make – and is up to 20 times more profitable. Since small doses of fentanyl create intense effects, it’s easier to illegally smuggle small batches across the border.
Criminal drug cartels are flooding the U.S. with counterfeit pills. More counterfeit pills have been seized so far in 2021 than the previous two years combined, with two out every five pills containing a potentially lethal dose of fentanyl. — Elise Stefanik, GOP

Let’s remember what Hillary’s comms director said in a leaked 2018 memo about what really drives their open borders policy — they think they can leverage it for political gain.

It finished, “If Democrats don’t try to do everything in their power to defend Dreamers, that will jeopardize Democrats’ electoral chances in 2018 and beyond.”

They may chant ‘power to the people’, but what they really want is power, full stop. People are just a useful means to an end.

Unfortunately for Democrats, the people are waking up to that fact, and people from all demographics are abandoning the party en masse.