It was the final day for SCOTUS to hand down rulings in this session, and the last day of Justice Breyer serving as part of The Nine. This ruling might even have broader policy impact than Roe.

As far as political third rails go, and the impact on the tug-of-war between questions of maternal autonomy versus questions of the baby’s right to bodily integrity, nothing will top the Roe decison for a very long time.

But as far as the balance of power between elected and unelected agents of the government, this ruling could have ripple effects that extend into many more aspects of everyday life.

It was a 6-3 decision, in which votes broke along the usual lines. The decision they handed down was not the one they had been hoping to hear.

The conflict centered on an EPA policy from the Obama era in which the administration worked backward from long-term emissions targets they deemed acceptable, and created a series of compliance expectations that would compel energy producers to shift from one kind of power production to another kind deemed more acceptable, with carbon outputs it deemed ‘reasonable’, in time constraints of the unelected government department’s arbitrary and (it was argued) unaccountable choosing.

Criticism from the left suggests this is a massive blow to environmental policy and the planet itself.

The court, in this ruling, has said nothing that would either support or prevent massive government initiatives relating to environmental initiatives of any sort. As the ruling itself explained, the broad question here was not for or against energy policies, but whether the policies set forward by the administrative state fell within the scope of legitimate delegated authority.

Spoiler alert: it did not.

That’s the reasoning behind the final ruling itself which said the EPA could not press their Clean Power Plan policy without specific legislation authorizing them to do so.

The EPA had claimed authority to make those regulations based on older legislation that gave them the authority to regulate commercial pollutants such as carcinogens or neurotoxins. Under the umbrella of climate change, the EPA took upon itself the right to include carbon dioxide as one of the pollutants they had the authority to regulate and created a plan which would have not only worked within their mandate of causing companies to adopt existing technologies (ie: scrubbers) that would reduce pollutants to less dangerous levels but would have taken upon themselves the right to demand energy producers ‘shift’ from coal to gas to renewables.

This novel regulation was not without significant consequences for those to whom it would apply. Screenshot from the second page of the syllabus given before the numbered pages of the ruling itself details what some of those harms would include:

Compliance with these EPA standards would result in the closure of dozens of coal plants and the elimination of tens of thousands of jobs.

What the crux of the question under consideration boiled down to is this: did the EPA act within its lawful scope of authority as delegated by Congress, or did it take upon itself rights beyond the lawful scope of its duly-assigned responsibilities?

Page 4 explains that Congress did not, at any point, grant the EPA authority to set emissions caps on power production or to compel ‘generation shifting’ from less preferred to more preferred forms of energy production. Further down that page, the ruling cites the ‘major questions doctrine‘ as the standard by which such delegation of authority can be determined.

Page 6 (b) points out that some of the powers the EPA has claimed for itself have been considered and rejected by Congress on multiple occasions.

The first portion of the ruling takes a close examination of the statute at the heart of the question, how it has been applied in the past, what precedents established past use, and what limitations might reasonably be associated with it.

Page 20, under point B zeroes in on the central issue. The EPA has changed what it was regulating, without any obvious legislative mandate to have done so.

Previously, they had regulated what byproducts could be produced in the ordinary operations of a commercial operation.

Now, the EPA had begun limiting how much of their PRIMARY product (eg: electricity) an otherwise compliant commercial operation could produce. 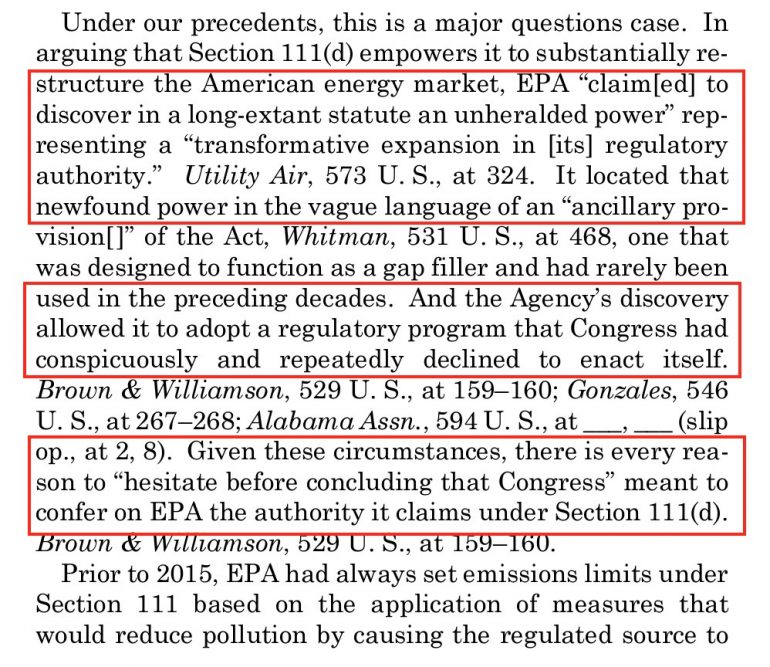 On page 23, the EPA’s own words were used as evidence against them:

It’s not as if Congress was somehow caught by surprise that carbon dioxide had been central to the Environmental debate. They knew. But on several occasions where past opportunity had presented itself to create legislation echoing what the EPA was attempting in their program, Congress rejected such programs.

What is the larger implication of this ruling?

It puts the Administrative State on notice that any policy shoved down our throats can be successfully challenged in court if they wander beyond the scope of their authority, which is bad news for all the activists Joe managed to appoint to various positions of governmental responsibility.

Considering the long history of bureaucracies doing precisely that, this is an important precedent… and could have big implications in any future use of the Chevron deference.