If Hitler and the Axis powers are the modern personifications of all evil, the last medal of honor recipient among that generation’s veterans should get the highest honors we can give, shouldn’t he?

But that’s not what’s happening on Nancy Pelosi’s watch.

Holding the gavel in the House comes with certain specific exercises of authority. For example, Nancy Pelosi is the one who had the final say on whether Trump’s offer of 20,000 National Guard troops to protect the Capitol building on Jan 6 would be accepted.

They were not, because Nancy didn’t like the optics. We all know how that ended, and yet Trump took more direct steps to prevent the events of that day than Nancy herself did.

Another of her powers as Leader of the House is the control of the Congressional schedule which ultimately shapes votes on who will — and will not — be permitted to lie in state.

Now that the of the living WWII veterans who had received Congressional Medals of Honor has gone on to his eternal reward, it seems only fitting that his death should be given a certain dignity as a final tribute given in proxy to all of those who fought and died alongside him in the bloody fight against the advances of Hitler, Tojo, and Mussolini.

LETTER: I called on Speaker Pelosi to immediately bring my resolution to the House floor, which would allow World War II Medal of Honor recipient and West Virginia native Woody Williams to lie in honor in the U.S. Capitol.

Hershel Woodrow ‘Woody’ Williams, 98yo Marine who fought in Iwo Jima and devoted his life to serving Gold Star families, sadly passed away. 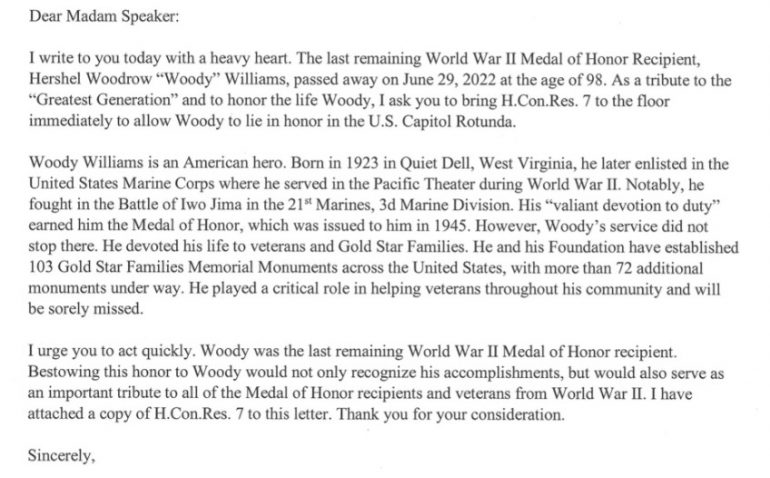 That letter called upon Pelosi to act quickly to allow this vote to go forward, so that Congress offer these particular honors to Warrant Officer Hershel Woodrow ‘Woody’ Williams.

Is there any reason she should withhold such a rare honor as this to such a worthy individual, especially in the context offered as a tribute to all such veterans who served in that conflict?

The short answer is ‘no’. Not unless there is some reason a tribute to those veterans conflicts with Democrat political objectives.

One can’t help but notice that such a tribute would shift national sentiment from anger and grievance about recent SCOTUS rulings, Jan 6 committee hearing and all the rest to a sense of history and gratitude for the sacrifices and the institutions that made this country great.

There is no reason NOT to give this honor. There has been a recent surge of individuals who have received special burial honors with their human remains being given special respect in memorials at the Capitol building, per the appropriate protocols, they are granted an invitation in one of three tributes of respect.

Recent examples of this include:

Here you will again notice the recent surge in how often these honors were awarded in the last 2 administrations.

Two historical examples are very similar to what is being proposed here:

A closer look will show some difference in who has been honored in that time.

Under Biden, we see the names of some prominent persons like Bob Dole, Harry Reid, and  Donald Edwin Young.

But we also see some other names that stand apart from the rest. Officer Sicknick and Officer Evans. Both of those deaths were leveraged for political advantage by Democrats who wanted to maximize the public perception of a national emergency involving some kind of a Trump-led Threat Against Democracy™.

To this day, there is little if any acknowledgment that the man behind the attack that killed Officer Evans was a racial bigot who had an affinity for Lewis Farrakhan. Similarly, despite endless J6 Committee and other Democrat allegations that several cops were killed as a result of violence that day, only one officer involved in the events of that day died within a day of the incident. It was found in Sicknick’s official autopsy (once FOIA requests finally got it released, long after the end of Pelosi’s last impeachment attempt) that Officer Sicknick, tragic though his death was, did not die as a result of J6 violence. ‘SCANT EVIDENCE’: New Report From FBI Blows Left’s ‘Insurrection’ Narrative Straight To Hell

No. He died of entirely natural causes (offical cause: stroke) and they ruled out any possibility of him dying from taking a beating to the head from a fire extinguisher, as was first claimed.