John Cleese and Monty Python are no strangers to censorship. What’s changed since the 70s is which cultural powerbrokers our comedians are no longer allowed to offend.

Monty Python was the poster child of transgressive comedy. When Life of Brian was released in Sweden Marketing included the line ‘The film so funny it was banned in Norway.’

The groups calling for censorship in the 70s and 80s (think: George Carlin’s 7 words) have long since been replaced by a very different kind of gatekeepers — the secular wokescolds.

What does Cleese see as the future of comedy with these sticks-in-the-mud overseeing modern notions of decency? He answered that question at ‘FreedomFest Confrence’ in Vegas last week.

It all has to do with the internal tension between the critical mind of the editor and the creative mind of the comic. It’s an either/or way of thinking, meaning you can’t do both at the same time.

“But I think it’s particularly worrying at the moment because you can only create in an atmosphere of freedom, where you’re not checking everything you say critically before you move on. What you have to be able to do is to build without knowing where you’re going because you’ve never been there before. That’s what creativity is—you have to be allowed to build. And a lot of comedians now are sitting there and when they think of something, they say something like, ‘Can I get away with it? I don’t think so. So and so got into trouble, and he said that, oh, she said that.’ You see what I mean? And that’s the death of creativity,” Cleese continued. “So I would say at the moment, this is a difficult time, particularly for young comedians, but you see, my audience is much older, and they’re simply not interested in most of the woke attitudes. I mean, they just think that you should try and be kind to people and that’s no need to complicate it, you know?”
The “Monty Python” star explained that wokeness allows the “critical mind” to take over the creative, saying they’re “definitely in opposition to each other.”
“You can do the creation and then criticize it, but you can’t do them at the same time. So if you’re worried about offending people and constantly thinking of that, you are not going to be very creative. So I think it has a disastrous effect,” Cleese told Fox News Digital. — FoxNews

The creative freedom needed to wander through the imagination, connecting ideas and concocting scenarios that see the world through fresh eyes cannot coexist with the rigid hidebound obedience to groupthink of any flavor. That includes the current crop of gatekeepers with their Puritanical enforcement of their own re-imagination of what it means to embrace a moral code.

To live by their rules — to really live by them — is to murder comedy itself.

You don’t have to take Cleese’s word for it. A news story that popped up while the final draft of this story was being composed gives a real-world example of this dynamic in play:

Dave Chappelle was set to perform a stand-up comedy routine Wednesday night at First Avenue in Minneapolis, but the show was canceled at the last minute following backlash. Chappelle has been at the center of controversy over his Netflix program, “The Closer.”
“The Dave Chappelle show tonight at First Avenue has been cancelled and is moving to the Varsity Theater,” the announcement said.
“To staff, artists and our community, we hear you, and we are sorry. We know we must hold ourselves to the highest standards, and we know we let you down. We are not just a black box with people in it, and we understand that First Ave is not just a room, but meaningful beyond our walls.” — FoxNews

Another venue opened their doors for him at the last minute, showing their support for artistic expression…

Attention Dave Chappelle Fans! The show scheduled for tonight at First Ave has now been moved to Varsity Theater. Your tickets from First Ave will be honored. Doors open at 8PM and we highly recommend arriving early.

This event will be a phone-free experience. pic.twitter.com/khrphPmqZo

Can you guess what happened next? 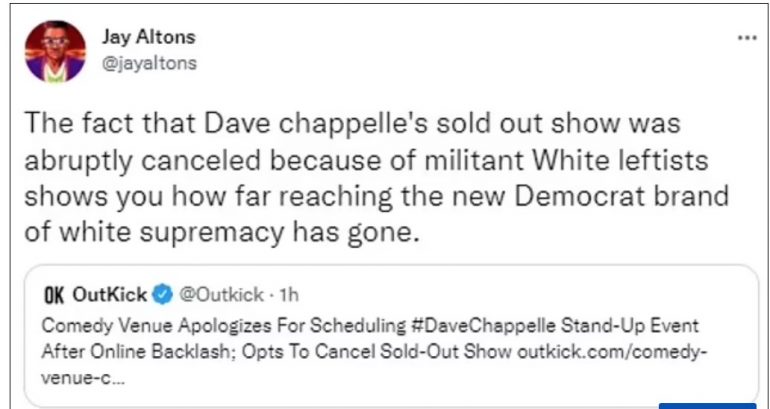 Who showed up, right on cue? The usual violent agitators on the left — the ones using force and intimidation to bully people into bending the knee to their worldview because they can’t be bothered to put in the work to persuade anyone. 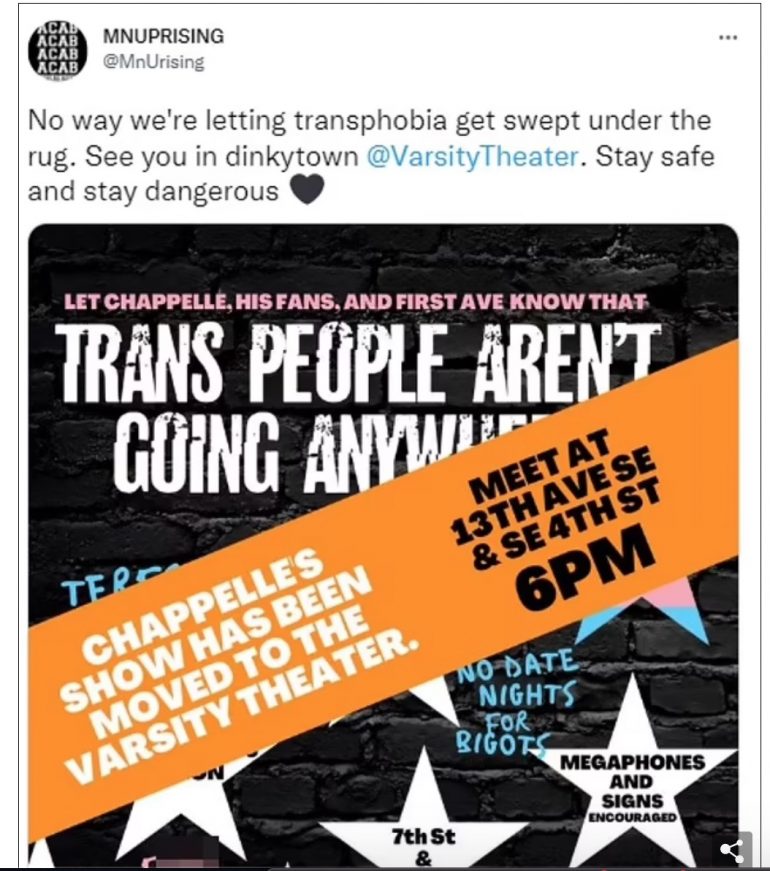 All in the name of compassion and inclusion, of course.

The more things change, the more they stay the same.

At least the religious ‘defenders of social norms’ were responsible for Life of Brian being canceled when it was released had the common decency not to threaten violence against those who disagree with them … unlike this modern crop of religious zealots.

I bet you weren’t expecting the Spanish Inquisition. (Nobody ever does. Surprise and all that.) But here we are.