Some political decisions are an ‘earthquake’ in changing political paradigms. This one could hit more like a tsunami, washing away all sorts of perceptions that have built up over decades.

For decades, we’ve been battered with messages about how fossil fuels are an existential threat to the existence of life as we know it. The eco zealots’ End Is Nigh religious messaging has literally been telling us we need to ‘turn or burn’ for years now.

AOC even used the most extreme interpretation of IPCC numbers to tell us the world would be past saving in 12 short years.

As for nuclear energy, Lisa Simpson has been opposed to Mr. Burns and his nuclear plant for what, 33 years now?

The European Parliament on Wednesday backed EU rules labelling investments in gas and nuclear power plants as climate-friendly, throwing out an attempt to block the law that has exposed deep rifts between countries over how to fight climate change.

The vote paves the way for the European Union proposal to pass into law, unless 20 of the bloc’s 27 member states decide to oppose the move, which is seen as very unlikely.

The new rules will add gas and nuclear power plants to the EU “taxonomy” rulebook from 2023, enabling investors to label and market investments in them as green. —Reuters 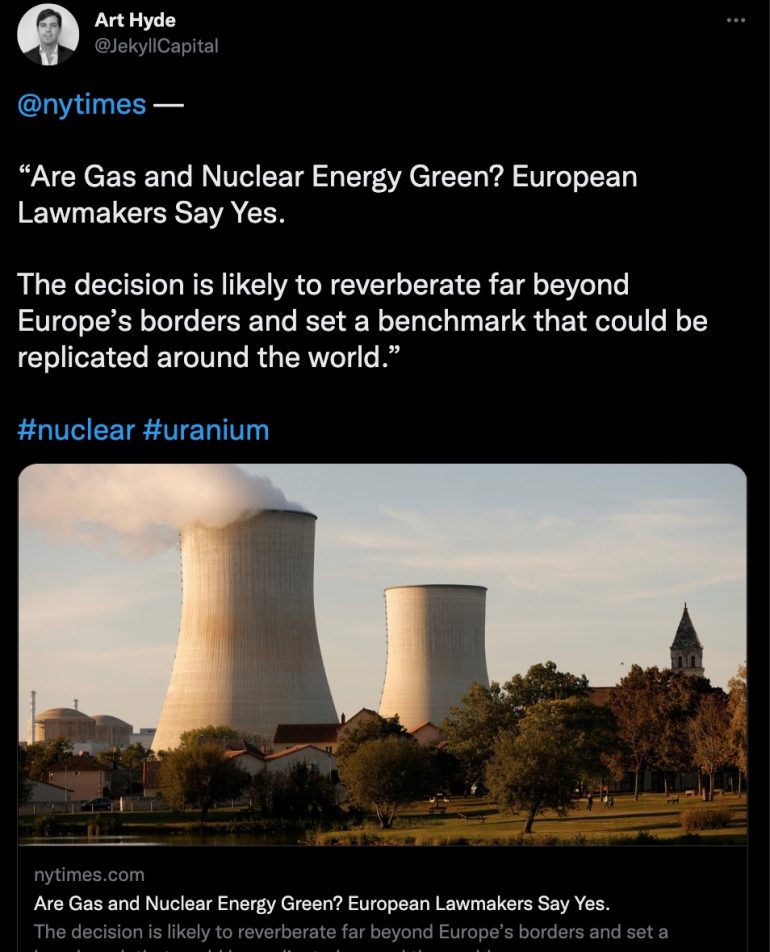 If the new rules go through, and it looks like they will, Lisa Simpson will officially be on the wrong side of the Green Energy issue while Mr. Burns will be the good guy.

The people who have been smugly driving around in electric cars powered by coal are absolutely beside themselves.

The EPA understood this dynamic. That’s why they were planning to compel power producers to shift their balance of energy production away from coal and toward natural gas or wind/solar before SCOTUS told them they were acting beyond their authority to make such demands.

This puts Biden in a tough spot. He has been shutting down fracking in the US because he is in completely in the pocket of the eco-lobby. But if even Europe starts calling natural gas a ‘green’ option, what justification will he muster to continue standing in the way of fracking?

The irony is, we at ClashDaily could hardly be called ‘eco warriors’ but we’ve been calling for the increased production of nuclear power for a long time.