This is very, very disturbing and it only gets worse…

Back on June 24, a 13-year-old girl went missing from Edmonton, Alberta, Canada. She was on her way to school and never arrived.

A little more than a week later, she was found 900 miles away in a hotel in Oregon City, Oregon with a 40-year-old Portland-area man who hosts a radio show on far-left radio station, KBOO.

Noah Whitefield Madrano was arrested Saturday in Oregon City by law enforcement officials with the Federal Bureau of Investigation and Oregon City Police Department. He is being held without bail in Clackamas County Jail on charges of first-degree sexual abuse, second-degree kidnapping and second-degree rape.

The teenage girl was with him when he was arrested, according to Chris Owen, the Clackamas County Chief Deputy District Attorney. She has since been reunited with her family.

Madrano appears to be a volunteer for KBOO, a radio station in Portland, where he co-hosts the Sub-Human Intellect Theater show. He was scheduled to be arraigned Tuesday in Clackamas County Circuit Court, and may face additional federal charges, Owen said.
Source: Oregon Live (July 5, 2022)

Edmonton Police say that Madrano is facing child luring charges in Canada and may face more as the investigation progresses.

Here’s a news report from KGW 8 in Portland:

The PostMillennial reports that Madrano uses a variety of pronouns and adds some very disturbing details about Madrano and the support for Antifa by the station that his podcast airs on.

At a bail hearing last week, Clackamas County prosecutors said the girl was targeted and groomed “over the course of a year” before being kidnapped. They also accuse Madrano of making “threats to kill her and have sex with her dead corpse.”
Source: The Post Millennial

The Post Millennial also notes that KBOO is Antifa-friendly. One of KBOO’s membership programs is a “Fight Fascism Power Pack” that rewards the $5/month donation with a flash drive “containing content by the violent Rose City Antifa and Portland Antifa members, Alexander Reid Ross, and Shane Burley,” on how to “effectively fight fascists.”

Canadian news reported that Madrano’s last podcast episode that aired on KBOO featured a segment that was extremely alarming at the time, but now that Madrano has been arrested, it’s off the charts disturbing.

Madrano is listed on a podcast app as the producer and co-host of a program that aired on KBOO. Postmedia messaged an email address linked to the podcast but did not receive a response.

The program’s most recent episode — since deleted — features a segment in which the host pretends to have phone sex with a teenage girl.

A girl’s voice can be heard on the recording, but it is unclear who she is, or if the voice has been altered or simulated. Postmedia asked Oregon City Police whether the agency is aware of the recording but did not hear back by press time.

In response to an email from Postmedia, KBOO board vice-president KatMeow Garcia, who uses they/them pronouns, condemned content advocating abuse of minors and said the station was not aware of the June 13 segment before the show went to air.

They said the U.S. Federal Communications Commission has “strict guidelines” on explicit content and that KBOO requires volunteers to take yearly training on the regulations.
Source: Edmonton Journal

Madrano was brazen in his pedo predilections on social media and Big Tech didn’t seem to bat an eye.

His Twitter account has been suspended, but the header was an uncensored image of a naked, prepubescent girl. ClashDaily has pixelized the disturbing image. 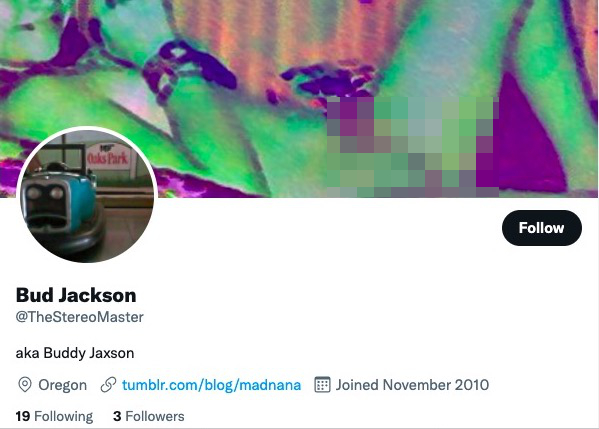 How is that disgusting mess allowed to stay up, but Libs of Tik Tok is locked out of her account for posting that Drag Queens shouldn’t be twerking in front of children?

One of Madrano’s last tweets reads, “I put my tiny c—k into little kid’s hands & mouths to make it seem bigger than it really is.” The only tweet that his account liked on Twitter was written by another person and it reads, “Literally at this point just admit you think it’s cool for people to rape little kids.” Additionally, the profile banner on the account appears to show a nude child.
There are only three followers on Madrano’s Twitter account and one of them is KBOO.

Madrano’s YouTube account under the username “Madnana42” also has content suggesting an interest in the violent sexual abuse of minors. A playlist on the account is titled, “Videos of teenagers literally getting raped.” The only video on the playlist is a Marilyn Manson music video of “Heart-Shaped Glasses.” Actress Rachel Evan Wood, who was 19 in the video, alleged this year that the sex in the 2007 music video was non-consensual.

Madrano’s YouTube account described the playlist as, “A barely legal Evan Rachel Wood (13) getting raped on camera by a guy twice her age.”
Source: The Post Millennial

This sick pedo bastard is why we should never, ever sanitize the desire to rape children as a sexual orientation.

This guy groomed a teen from across an international border for a year so he could lure her to Oregon and rape her.

Pedophilia is a perversion that needs to be stigmatized forever.

We need to protect kids. Clearly, there are some on the left that really don’t want to.