Not so long ago, we could have invoked the children’s story ‘Chicken Little’ as a shorthand for what’s going on. But for the last few decades, everyone has been Chicken Little.

The sky is falling. The end is nigh. We’re all gonna die. The world is on fire.

However you want to say it, it wasn’t so long ago that we had a story that taught our children that the correct response to cataclysmic thinking is to be found in asking questions about your assumptions. In Chicken Little’s case, the sky wasn’t falling; a falling acorn had bopped her on the head.

In our modern case, we can apply the same critical thinking our own cataclysmic assumptions. And is anything more cataclysmic these days than the popular eco narrative that the end of the world is only a few years away?

Every weather event is proof positive that the end is nigh, and the latest heat wave in the UK is no exception to that trend. But if you are paying attention, you will see that we haven’t always been so panicked.

Weather maps are now routinely splashed in ‘danger’ colors, with bright red indicating extreme weather. But just a few years ago, this same weather was displayed quite differently on the same weather maps. 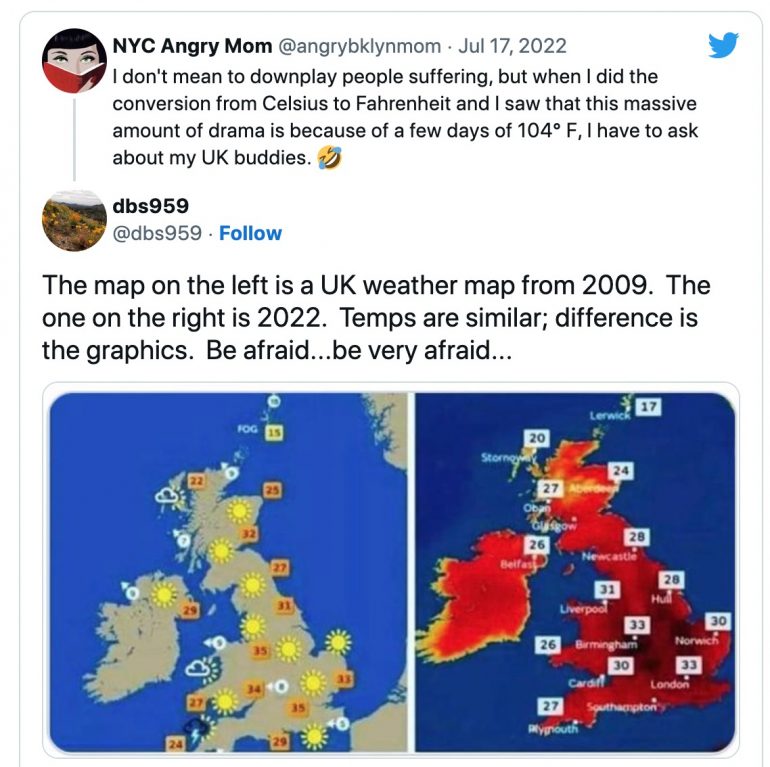 Some people have been doubting the veracity of the map on the right, and fair enough. But there are two things we can still take from it even if it’s not genuine. First, is that we are seeing images like the one on the right to show weather. There’s a BBC screenshot below to prove it. The other is the fact that younger people may not realize it, but we really did have weather pictures that only told you the weather condition (sunny/cloudy/rainy/snow) and the temperature, without coloring it

Interestingly, you will note that the friendly, happy map on the left is actually warmer than the ‘danger’ one that someone posted on the right.

We see these color-coding all the time, and we don’t think too much of it. 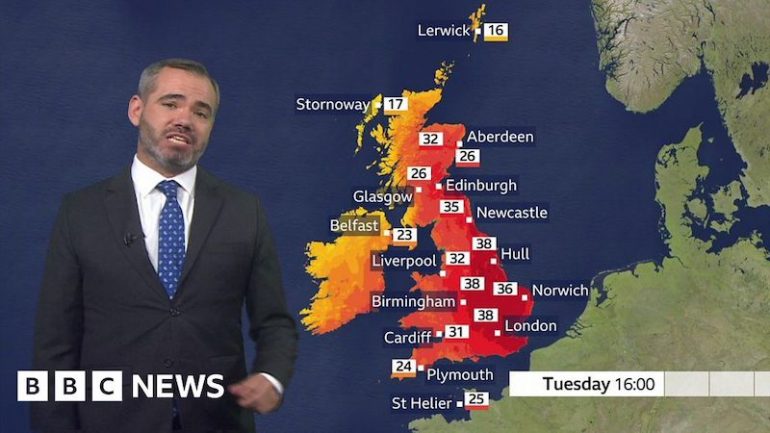 But if you don’t think the images carry any psychological effect, maybe you’ve already forgotten CNN and their COVID death clock. The death clock that Project Veritas leakers told us was put on the screen every time their ratings weren’t performing as well as they hoped.

And if anyone thinks heat waves like this are new, and direct evidence of (specifically) human-induced warming?

38.9C in London in 1932. CO2 was around 23% lower than now. Ignore the charlatans, scaremongers and other assorted climate grifters wailing about summer weather. https://t.co/jZoNEgn7tr

That’s not to say that they’re not seeing hot weather. But as the eco-left loves to remind us any time it helps their argument, ‘climate is not the same as weather’.