There is one cardinal rule in online interaction — “Don’t take the bait.” AOC just learned what happens when you forget that rule.

As an avid social media user across multiple platforms, you’d think that Rep. Alexandria Ocasio-Cortez (D-NY) would know not to interact with a troll.

But this incident was just too tempting for her to try to use it to make herself into the victim.

On Wednesday, comedian and internet troll, Alex Stein filmed a clip of AOC arriving at the Capitol building. In the video, he catcalls her saying that she’s his “favorite big booty Latina” says that she looks sexy in her form-fitting dress, and calls her  “hot, hot, hot like a tamale.”

“She wants to kill babies, but she’s still beautiful,” says Stein to the camera.

In the video, a mask-wearing AOC walks up the steps, approaches Stein and poses in front of his camera holding up her fingers in a peace sign saying something like, “hey, Alex, wanna do a little selfie.”

Stein gained some online prominence for posting videos where he attends City Council meetings and makes political and cultural points during the open mic portion. Lately, he has gained even more attention for his videos on the so-called “Family-friendly” Drag Queen event in Dallas and filmed confrontations of lawmakers like his recent scuffle with Rep. Dan Crenshaw (R-TX).

AOC posted a livestream about Stein’s brief trolling and milked it for all of the drama that she could manage.

Perhaps she had that same fear of being raped like she did on January 6 when she was several buildings away from the Capitol and locked in her office.

AOC also tweeted about the incident and then deleted it. But she followed up with another pair of tweets.

Her account of the less than 30-second encounter had no bearing with reality.

“I posted about a deeply disgusting incident that happened today on the Capitol steps, but took it down bc it’s clearly someone seeking extremist fame,” she tweeted, adding, “It’s just a bummer to work in an institution that openly allowed this, but talking about it only invites more. Just really sad.”

Is this what u tweeted? pic.twitter.com/1HZB4NBtVr

She then posted his video on her Twitter account to get the engagement herself adding that she was “actually walking over to deck him” because she’s just that sort of feminist. You know the kind — fearless of assault charges. 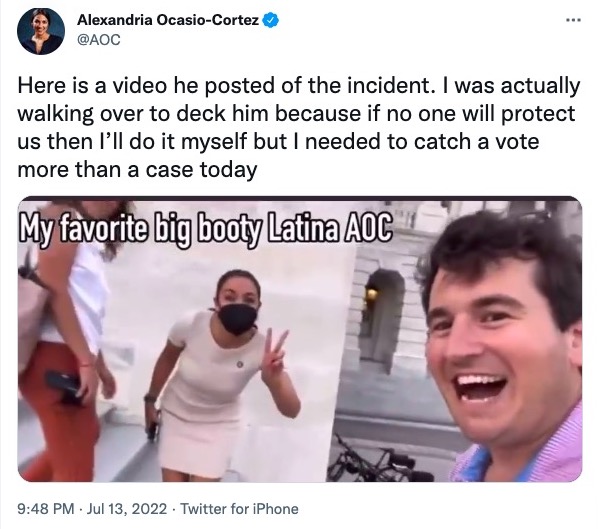 While AOC makes this all about her, Stein wasn’t just there to catch a glimpse of the Puerto Rican Congresswoman in a bodycon dress, he was trolling some of the male Members of Congress, too.

Here he is asking Rep. Jamaal Bowman (D-NY) if Hunter Biden has good taste in prostitutes.

And here he is calling out Rep. Adam Kinsinger (R-IL) as a RINO and telling him he sucks.

Calling out rino @AdamKinzinger for being a D-Bag pic.twitter.com/aSPtJfwhtM

AOC made the worst mistake possible for someone with a large social media following — she fed the troll. The incident would have likely disappeared as a blip if she hadn’t given it oxygen. Instead, Alex Stein’s name was trending on Twitter.

Thank you @AOC for making me trend on twitter tonight! pic.twitter.com/TyHLtWRFK1

It became the featured story on The Daily Mail on Thursday morning. 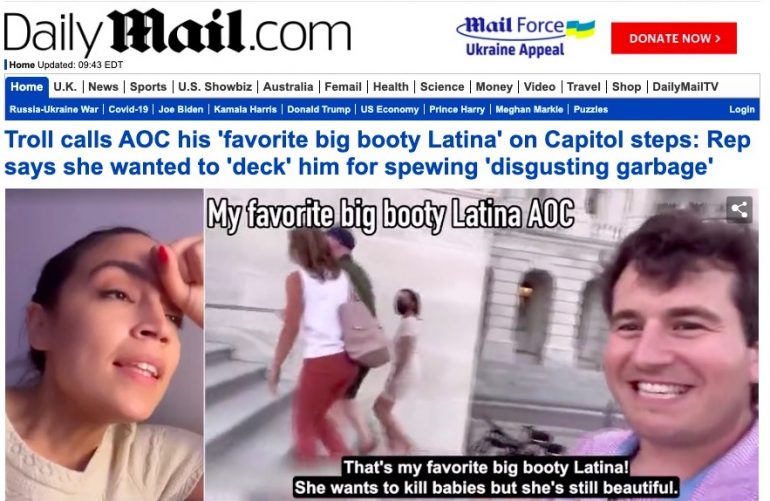 It’s clearly what he was looking for.

If you really love me you would of at least tagged me https://t.co/MnDJ3FUdwr

This whole thing is quite an interesting turn of events since the Congresswoman from New York’s 14th Congressional District thinks it’s perfectly fine when protesters harass a Supreme Court Justice at a restaurant. And that’s after a man was arrested near the same Justice’s home after admitting that he had planned to assassinate Kavanaugh.

Poor guy. He left before his soufflé because he decided half the country should risk death if they have an ectopic pregnancy within the wrong state lines. It’s all very unfair to him.

AOC thinks it’s okay to harass a SCOTUS Justice who interprets the law in a way that she doesn’t like because their decisions make them “fair game” but heaven forbid someone react the same way to a self-proclaimed Democratic-Socialist lawmaker who wants to restructure the entire economy in order to appease the Gaia worshippers.

Many of us have spent weeks in armored vehicles & traveling through backs of buildings bc of right-wing threats. You don’t hear much about it.@GOPLeader McCarthy said he wants to promote House members who incited violence.

Their feigned horror at protest is a silencing tactic.

While it’s horrible that any politicians are facing threats of violence from any side of the aisle, it’s a bit rich coming from someone whose political faction excuses BLM and Antifa violence as “mostly peaceful” protests and is currently turning a blind eye to the violence against pro-life organizations including those who assist women who have unplanned pregnancies.

Reactions to the Alex Stein video from rightwing Twitter poured in.

And then came the memes.

Stein then posted that his intention was trolling.

It’s literally too easy to troll these politicians…if only they had a sense of humor this wouldn’t be a viral story every time.https://t.co/372zHEsfgT pic.twitter.com/aC1krQ84fJ

Stein was on Tucker Carlson Today and explained why he does his comedy.

“I’m taking the most absurd parts of our culture and jamming in people’s faces so they realize, is this true? Is this real? Is this fake?”
The full interview with @alexstein99 streams exclusively on @foxnation – plus: unlock free sign-up offers only at https://t.co/voL1Yti7Mo pic.twitter.com/KlCKeoVR3i

It’s no secret that this author was very critical of Alex Stein when he was making a splash with his awful pro-vaccine and masking bit at a Dallas City Council meeting, but… that interview with Tucker is an interesting clip.

As for AOC… well, she’s the perpetual victim and enjoys being the troll rather than being the target of the trolling.

That’s not how this works, hun.

If you dish it out, you’d better be able to take it.

There are much better role models for women than AOC.