After two and a half years of dodging the COVID bullet — Joe has now contracted the virus despite four doses of the vaccine. So much for the President’s claim, “This is a pandemic of the unvaccinated.”

The White House announced on Thursday morning that President Biden has tested positive for the SARS-CoV-2 virus.

Following the public health recommendations, the 79-year-old POTUS received his first shot of the Pfizer/BioNTech vaccine in December 2020, his second dose of the primary series in January 2021, his first booster in September 2021, and his second booster on March 30, 2022.

The White House physician sent a memo to the White House Press Secretary Karine Jean-Pierre stating that while the President tested positive for the virus during his routine screening tests, Biden was “experiencing mild symptoms” and was taking Pfizer’s antiviral, Paxlovid. 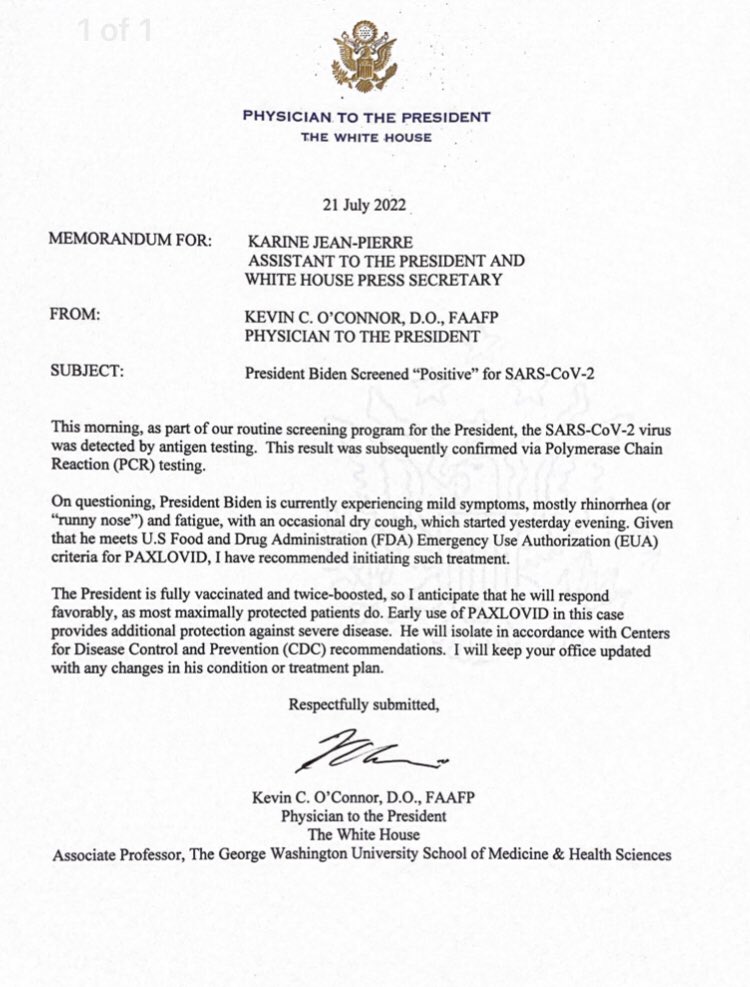 Karine Jean-Pierre then issued her own statement to the press.

“This morning, President Biden tested positive for COVID-19,” White House Press Secretary Karine Jean-Pierre said in a written statement. “He is fully vaccinated and twice boosted and experiencing very mild symptoms. He has begun taking Paxlovid. Consistent with CDC guidelines, he will isolate at the White House and will continue to carry out all of his duties fully during that time. He has been in contact with members of the White House staff by phone this morning, and will participate in his planned meetings at the White House this morning via phone and Zoom from the residence.”

“Consistent with White House protocol for positive COVID cases, which goes above and beyond CDC guidance, he will continue to work in isolation until he tests negative,” Jean-Pierre continued. “Once he tests negative, he will return to in-person work.”

“Out of an abundance of transparency, the White House will provide a daily update on the President’s status as he continues to carry out the full duties of the office while in isolation,” she said.
Source: Fox News

Folks, I’m doing great. Thanks for your concern. Just called Senator Casey, Congressman Cartwright, and Mayor Cognetti (and my Scranton cousins!) to send my regrets for missing our event today.

…but he forgot to say The Line™.

No worries. White House Press Secretary said The Line™ on behalf of the President in her statement. 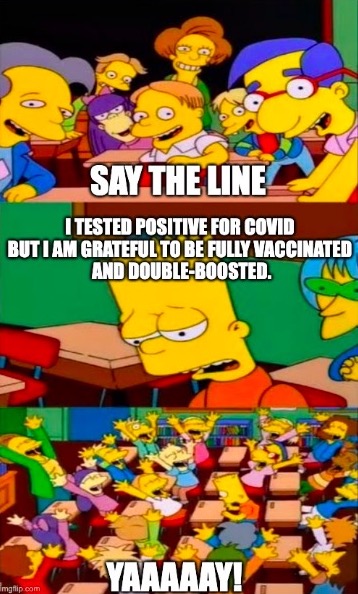 Last month, Saint Fauci — Peace Be Upon Him — who is just a couple of years older than Biden and has also received 4 jabs, tested positive for COVID and was taking Paxlovid as an early treatment.

He then announced that he was back on Paxlovid against CDC recommendations because he had a case of “Paxlovid rebound” COVID.

While Joe’s trip to Rehoboth Beach has been postponed and he’ll stay put at the White House, “Doctor” Jill has (so far) tested negative and will continue with her scheduled appearances on Thursday.

Biden’s last previous test for COVID was Tuesday when he had a negative test result, the White House said.

First Lady of the United States Jill Biden told reporters that she tested negative for COVID-19 and will be keeping her schedule Thursday in accordance with CDC guidelines.
Source: Fox News

Of course, this news was “pounced on” by right-wing Twitter who noted that the President had assured everyone that getting 4 shots of the vax would prevent infection.

It was one year ago today that Biden said this quote: “You’re not going to get covid if you have these vaccinations.”

Just a few months ago, Biden was calling the continued spread of an airborne respiratory virus a “pandemic of the unvaccinated.”

“This continues to be a pandemic of the unvaccinated.”

Now that “breakthrough” cases and reinfections are the norm, that little clip didn’t age very well, did it?

Realize what this means… the guy that has been protected by those around him and following every guideline has contracted the virus. What does that say about Fauci’s “mitigation measures”?

If Biden, who is the most frail and most protected man in America can get COVID after all the shots, masking and security… then anyone can and none of it makes a difference.

President Biden is now walking proof that he was full of sh*t on vaccine mandates.

Be prepared for the Regime media blaming every Biden gaffe on “COVID brain fog” and “Long COVID” in the future.

When the WH doctors treat Biden with injections of sunlight. pic.twitter.com/Gi9RNSp5gj

If he loses his sense of smell he’ll be devastated pic.twitter.com/8qBW8r0Fs4

It may be unpleasant to say it, but due to his age, the President is in the highest risk of severe complications from COVID including death.

Can you just imagine how Kamala is feeling right now?

The knives are out, apparently.

A statement purporting to be from the former president is circulating on social media and it’s classic Trump. If it isn’t actually a Trump statement, it’s certainly captured his way with words.

It says, “Joe Biden, who many have said is our worst President, has come down with a case of the China virus, despite being vaccinated. I hope Sleepy Joe is able to bounce back quickly, much as I was. Doctors described my fight against the China virus as Herculean, and not meaning the woke Disney Hercules but rather the Kevin Sorbo one. The Lou Ferrigno one as well. Joe, I wish you a speedy recovery, even though you are taking America in the wrong direction. No one wants Kamala!” 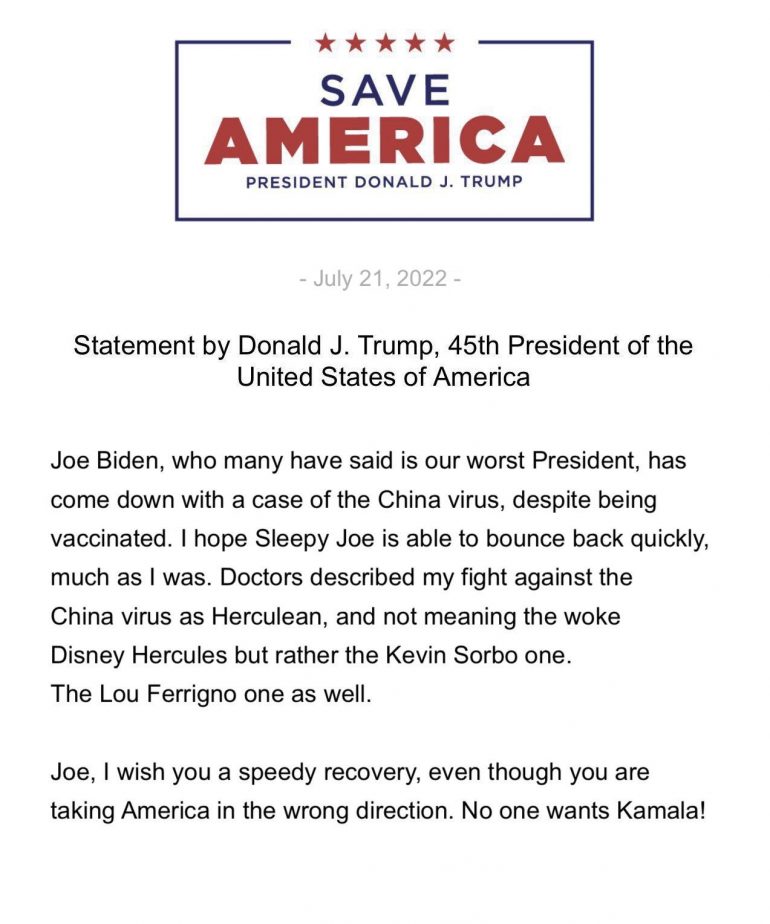 [UPDATE: Yes, the statement is “fake news” — but it was still hilarious!]

Here at ClashDaily, we’d also like to express our well-wishes to the current President for exactly the same reason — no one wants Kamala.